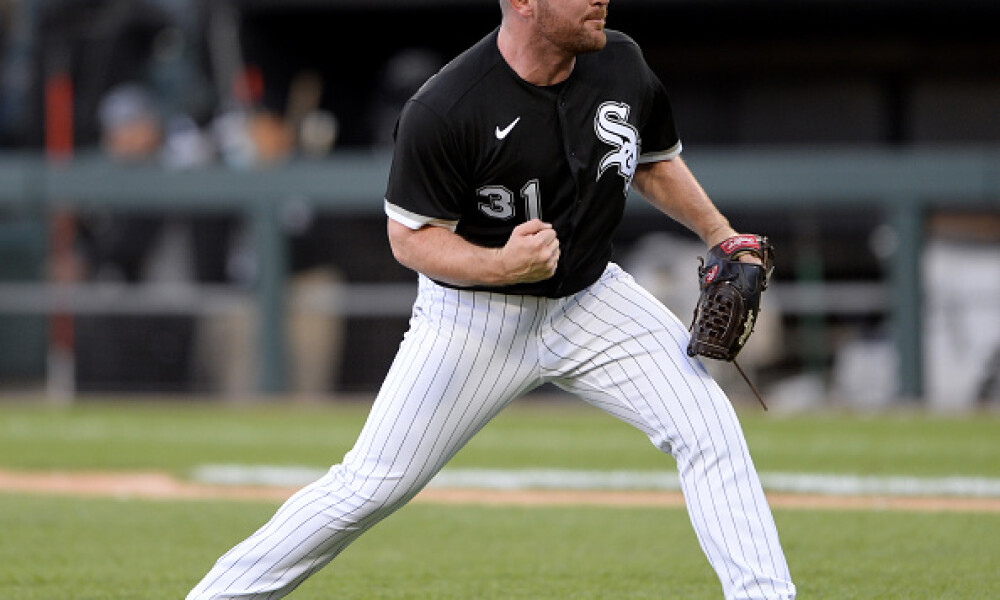 The Rays newest addition to their bullpen has been on fire this week and both the Royals and Orioles have new pitchers closing out their games. We’ve also got another three relief pitchers who you can potentially stream in weekly leagues. Please enjoy this week’s Bullpen Report.

Hendriks continues to slam the lid on game after game as one of baseball’s best closers. He saved another three games last week and hasn’t given up a run in 14 consecutive appearances dating back to April 29th. Steamer Projections expect him to save another 19 games before the end of the season making him an excellent trade target.

In last week’s column we mentioned that Feyereisen probably wouldn’t be used as the Rays’ primary closer. After all, it was Diego Castillo’s job, right? Well, since last week’s column Feyereisen saved two games and worked a scoreless eighth inning. It’s clear that Feyereisen is going to be regularly pitching in high leverage situations and given the opportunity to save some games. Castillo did work the eighth and ninth inning of two games last week and will also continue to pitch in high leverage situations. Given how the Rays manage their roster and have a knack for getting the most out of their players, neither Feyereisen nor Castillo will likely be the Rays’ closer. However, both will likely be closing out games for the Rays going forward and both have fantasy value.

Ponce de Leon saved back-to-back games for the Cardinals last week, but don’t expect him to get too many more save opportunities going forward. Those opportunities manifested themselves out of pure necessity. His first save on May 27th came in a game that lasted until the 10th inning and Genesis Cabrera, Giovanny Gallegos and closer Alex Reyes had already been used in the earlier innings of that contest. Cabrera, Gallegos and Reyes had worked back-to-back games and were unavailable on the 28th allowing Ponce de Leon to pick up his second consecutive save. With Cardinals starter Jack Flaherty likely on the IL for a while due to a “significant” oblique strain, look for Ponce de Leon to resume his role as a long reliever. He may even have an opportunity to work his way into the starting rotation, or he could even see work as an opener during Flaherty’s absence.

Heading into Wednesday’s action 10 pitchers had two holds each last week. Let’s focus on a couple of those pitchers (both Royals) who haven’t yet been covered in this column.

With the injury to Royals saves leader Josh Staumont, we project Zimmer to be the third man up in KC’s bullpen. He hasn’t given up a run in his last nine appearances, posting two wins, a save and three holds in 8.2 IP. Opposing hitters have an .074 BAA him during that span. His slider is particularly effective, inducing a 35.1 Whiff % this season.

Over the past week, Brentz has pitched four scoreless innings and has struck out five batters. Unfortunately, too many of the starting pitchers in your weekly lineups probably didn’t put up those kinds of numbers last week. Like Zimmer, Brentz hasn’t given up a run in his last nine appearances, striking out 11 and giving up just one hit during that time span.

With the Josh Staumont hitting the IL due to a knee sprain, Greg Holland seems to be the pitcher that the Royals will lean on to close out games. Scott Barlow will also likely be given save opportunities as well. Kyle Zimmer and Jake Brentz have the skillset required to fill in as needed, but Royals manager Mike Matheny also mentioned that Tyler Zuber and Ervin Santana could be used in high leverage situations should the need arise.

As we mentioned last week Cesar Valdez, the O’s closer for most of the season, has been struggling of late, posting a 15.88 ERA in his last eight games.  With the Orioles recent slump, saves have been hard to come by, but a lot of fantasy baseball manager’s took notice when Cole Sulser picked up his first save of the season on Monday night. Sulser has a 1.74 ERA with 32 strikeouts in 20.2 IP this season. He punishes left-handed batters (.110 lifetime BAA), but right-handed hitters have a .263 lifetime BAA him. You can take a chance and add Sulser (who saved five games for the O’s last season), off the waiver wire this week, but keep in mind that Paul Fry might get some save opportunities as well. Both Sulser and Fry may both be pushed aside once Hunter Harvey makes his return from the IL.

Keep an eye on Dodgers’ next man up Blake Treinen. Treinen was unavailable for Monday’s game and Dodgers manager Dave Roberts would not specify the reason. According to Roberts “there was a little something in his pregame, that his body didn’t feel right. We just wanted to make sure to give him an extra day.” Treinen did pitch on Tuesday but gave up two hits and an earned run in 1.1 IP. He also gave up three earned runs in .2 IP in his previous outing on May 28th. Should Treinen be forced to miss time, we project that Victor Gonzalez would be the next man up following closer Kenley Jansen.

In our last few columns, we’ve been featuring relief pitchers who typically work multiple innings per week who you can use in your weekly lineups in place of a struggling starting pitcher who has a tough matchup. The following three pitchers each posted a solid ERA and struck out seven batters over the past week. We’ve listed each pitcher’s overall season stats, (as of Wednesday morning), as well as their stats for the past week. 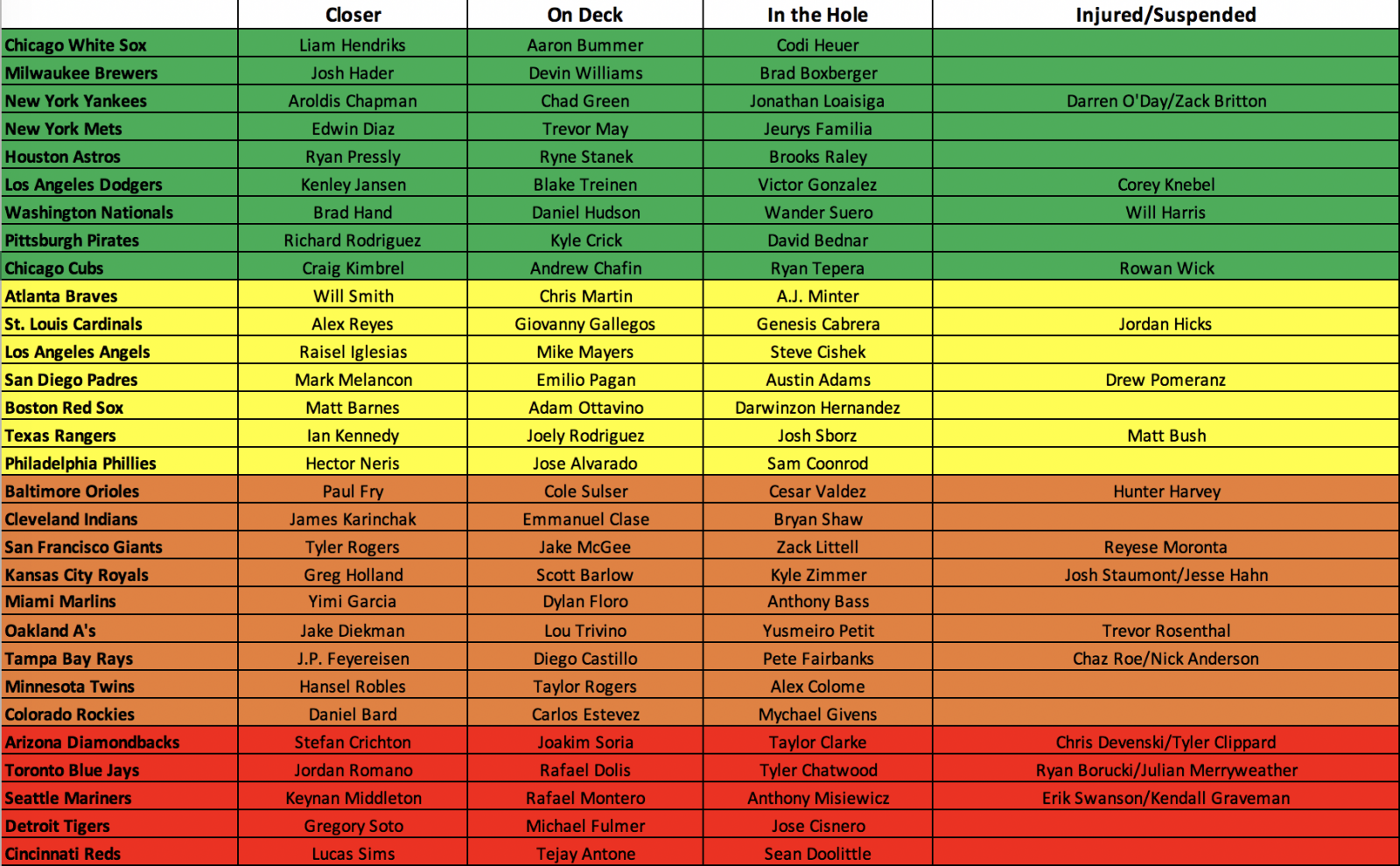