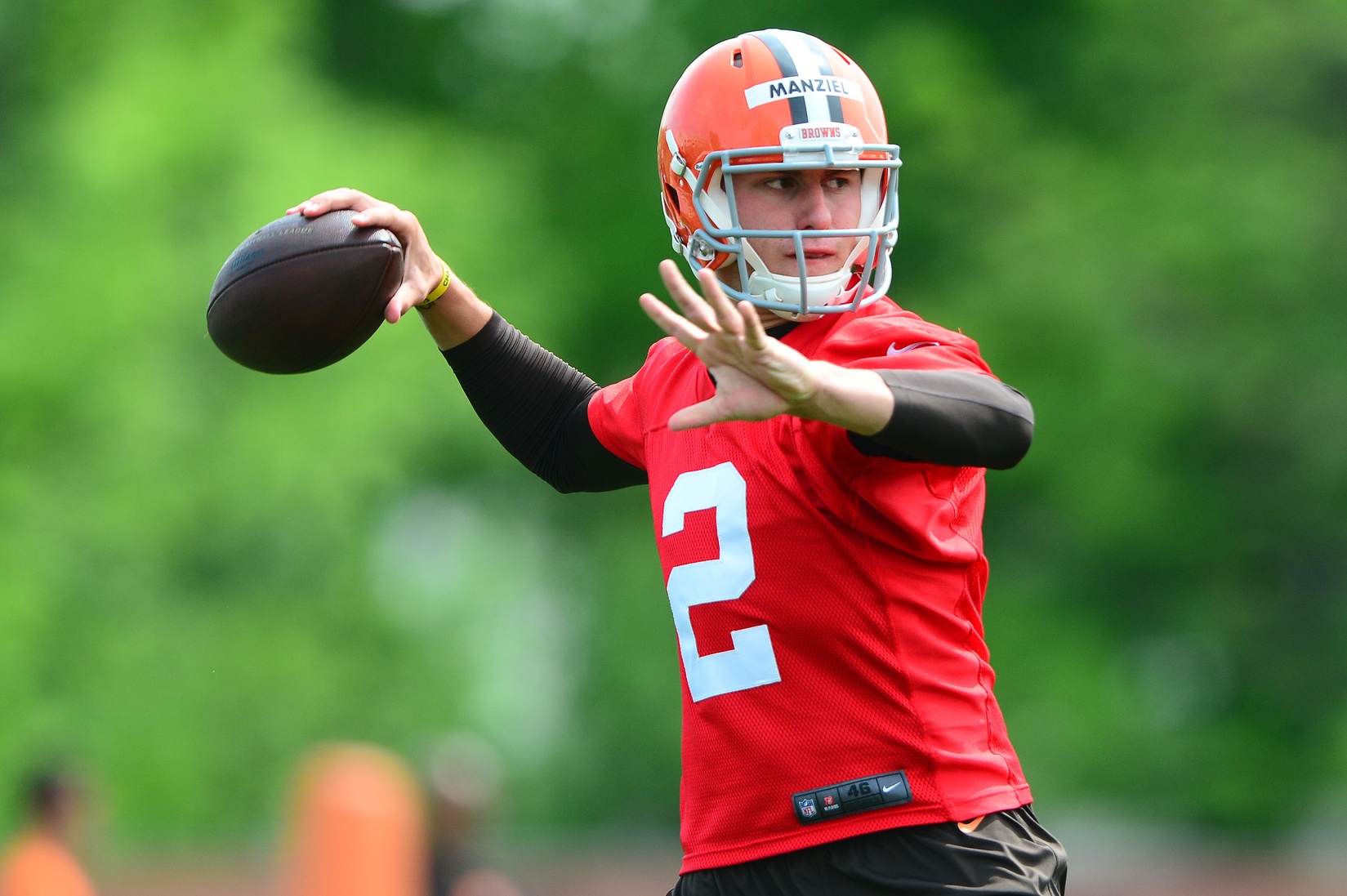 Here is the Training Camp Report for Sunday August 3rd:

Ahhh….football is finally back!! Tonight the Bills and the Giants kick off the 2014 preseason with the annual Hall Of Fame Game in Canton, Ohio. Both teams have said that they will play their starter about 20 plays tonight so don’t expect to learn much about Eli Manning, C.J. Spiller or Sammy Watkins. Not will we find out much about the Giants new up-tempo offense though I am sure they will have at least one drive of hurry up this evening. No matter what we wind up seeing tonight it is good just to have football back again.

That’s right I cursed. If you’re not used to seeing big boy words in your fantasy football commentary chances are you are reading regurgitated propaganda which takes us to our first story today.

Contrary to what you are reading elsewhere, Johnny Manziel is not “closing the gap” on becoming the starting QB in Cleveland. Anybody and I mean A N Y B O D Y who has seen the two players practice this past week and a half can see that Brian Hoyer is well ahead of Johnny Football at this point in time. The fact is Manziel finally made a couple of plays in the Browns intersquad scrimmage on Friday night. Mind you if Johnny would try ad pull that “I’m going to outrun this linebacker” during a game he would wind up with his dick in the dirt.

The media hype surrounding Manziel is intense and it has lead to everything he does being overhyped to the maximum capacity. Manziel will start at some point for the Browns this season much like Tim Tebow had to start for the Broncos back in 2011. But at this given point with the Browns new regime trying to make a good impression to its fanbase they are going to try and win games. Brian Hoyer is by far their best chance to win games in the near future.

As I have said over and over this spring and summer: I don’t think Johnny Manziel will ever be an above average (or greater) NFL QB. I have never really been more sure of anything in my whole life. This kid has every single indicator of being a complete bust and why more of you don’t see those traits I really have no idea. In dynasty formats I would take Zach Mettenberger, Blake Bortles, Logan Thomas, Aaron Murray, Tom Savage and even Tajh Boyd ahead of Manziel right now. Notice that I didn’t mention Teddy Bridgewater as I think he is less talented than Manziel but does offer a much better mental makeup.

Many onlookers at Jets camp are confounded about the lack of a QB competition going on between Geno Smith and Michael Vick. Vick has outperformed Smith in every area thus far yet is not under consideration for the starting job. Worst of all is that Vick doesn’t even want the QB1 job and is more than content being Geno’s backup.

During a recent 12 drive scrimmage Vick showed off his still elite level wheels in racking up 35 yards rushing quite effortlessly while Geno Smith barely surpassed that passing. Smith has grown a bit this summer but he still isn’t the type of QB capable of making players around him better. And he sure as hell doesn’t instill fear in opposing defenses the way that Michael Vick does. I wonder how long it will take for Rex Ryan and company to pull the plug on Geno this season.

It has become clear already that Cam Newton really likes throwing the ball to rookie WR Kelvin Benjamin. Since Benjamin returned to practice after bruising his knee, Newton has shown dramatic favoritism toward the 6’5” wideout. The two even stayed late this weekend to work on back shoulder routes for well over an hour. It should be noted that Newton has never had the luxury of a WR over 6’1” since he has been in Carolina. Between Benjamin, Jerricho Cotchery and Tiquan Underwood, the Panthers now have plenty of size for Cam to throw to this season. The more I think about it the more I think the Panthers WR corps will be quite improved from where it was in 2013.

When the Ravens signed Owen Daniels this offseason it was one of those moves that interested all of us fantasy football nerds. Highly effective TE following his former head coach to Baltimore where there is a glaring need behind Dennis Pitta. Kubiak’s offense utilizes the TE position in a number of ways that provide very steady reception and TD numbers for his guys.

Sadly, the torn ACL that Daniels suffered last season with the Texans appears to have completely zapped his speed and greatly impacted his blocking power as well. Daniels is falling behind third round pick Crockett Gilmore and even undrafted free agent Shaun Chapas.

Often it takes a full year for a player to regain a high amount of his effectiveness after a torn ACL. Unfortunately Daniels doesn’t have the luxury of waiting to return to form as he has a non guaranteed contract and could easily be cut before the season. I have seen him drafted in the late round this year as a backup TE but at this point that is a very high risk move. I recommend staying clear of Daniels in 2014.