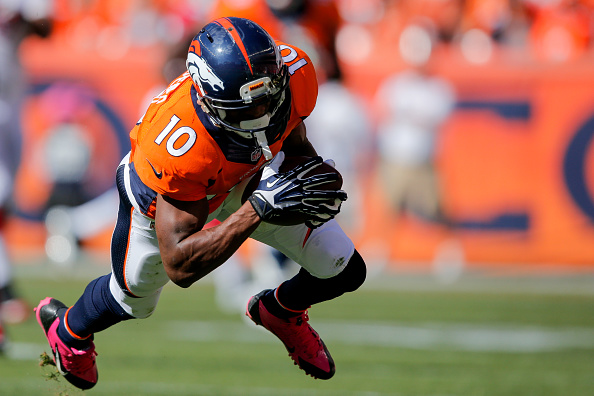 Well, Week 11 was another tough one for some fantasy owners as some key events have left many scrambling with Week 12 quickly approaching.  First, there were injuries to a pair of top-10 tight ends in Julius Thomas and Dwayne Allen. Then, a monster hit that left top-five wide receiver Emanuel Sanders with a concussion that could hold him out this week.  There was also a season-ending injury to a top 10 running back in Ahmad Bradshaw and the release of two running backs who were unhappy with their current back-up roles in Ben Tate (claimed by the Vikings) and LeGarrette Blount (signed by the Patriots).  With that being said I will take a look at a few players who were positively and negatively affected by the events that happened in Week 11 as well as a player who I have just simply lost faith in going forward.

John Brown, WR ARI- Since I know you read last week’s Stock Watch article you will remember that I had Larry Fitzgerald on the “Sell” portion due to Drew Stanton taking over at quarterback and how poorly Fitzgerald has performed with him at the helm.  Well, that prediction did not disappoint as Fitzgerald caught just two passes on four targets before getting injured.  Though Michael Floyd caught two touchdown passes my “Buy” for this week is rookie John Brown.  The injury to Fitzgerald has opened the door for Brown who has been targeted 26 times in games which Stanton starts. Brown flashed his talent earlier this season when he caught three touchdown passes in the first three games but was used more as a deep threat for Carson Palmer which made him a boom or bust play.  With Brown’s down-the-field speed and Stanton’s propensity for throwing the deep ball I think Brown is poised to excel going forward and could be a nice low risk/high reward pick up that is owned in just 17.6-percent of fantasy leagues.

Coby Fleener, TE IND- Outside of Jonas Gray, Fleener was likely one of the most added players in fantasy this week due to the injuries sustained to Julius Thomas and Dwayne Allen as well as the overall lack of production fantasy tight ends have offered this season.  Fleener has actually performed well in three of the last four weeks, having caught at least four passes with at least 60 yards in those contests, culminating with his seven-catch 144-yard performance against New England on Sunday night.   With Allen likely out for Sunday’s game against the Jaguars, a team that has allowed the eighth-most points to opposing tight ends this season, Fleener could be poised for another big outing.  The Colts running game took a big hit on Sunday with the loss of Ahmad Bradshaw which should make their already pass-first offense rely on the arm of Andrew Luck and his receivers even more. Fleener is still available in just under 60-percent of fantasy leagues and should be looked at as more than just a one week stop-gap, given his recent production.

Jerick McKinnon, RB MIN- The Vikings were the winners in the Ben Tate sweepstakes after he was cut from the Browns earlier this week.  Though Tate’s role with the Vikings has likely yet to be determined, this is hardly good news for McKinnon owners who are already dealing with Matt Asiata vulturing all the goal-line carries.   McKinnon has provided his owners with solid flex play/RB2 upside since taking over the starting role from Asiata back in Week 6, but with Tate, comes a player with a similar skill-set who is also capable of catching the ball out of the backfield.  McKinnon should be in no danger of losing his starting job but it is also reasonable to believe that Tate will take away a share of the snaps which will ultimately affect his production.  If I am a McKinnon owner I am panicking a bit until I see a clearer picture on how Ben Tate will fit into the Vikings offense, especially with the fantasy playoffs approaching.

Keenan Allen, WR SD- Prior to the Week 8 matchup against the Broncos, I had listed Allen in the “Buy” portion of this article as I believed that, given the success that Philip Rivers was having, eventually his No.1 WR from a year ago had to come around.  Allen ended up catching nine passes for 73 yards and a touchdown against the Broncos and it looked as if that game was going to be his coming out party for the second half of the season.  Granted the Chargers have played just two games since then and their offense has not looked great, but in standard leagues, Allen has averaged just 5.5 points per game.  Though the schedule might not look too intimidating in terms of fantasy matchups, the Chargers do face a Rams defense that just held the Broncos to seven points this week and then have to travel to Baltimore for Week 13 before running the gauntlet of New England, Denver and San Francisco, all of whom have playmakers on the defensive side of the ball and will look to lock down Allen and make Rivers target his secondary options.  Allen is no more than a WR3 at this point in the season and there are likely higher upside plays available to you on the waiver wire or through trade for those in leagues who have yet to pass the trade deadline.