Greg Jewett takes a look at how the shortened season is impacting statistical trends for both pitchers and hitters alike. 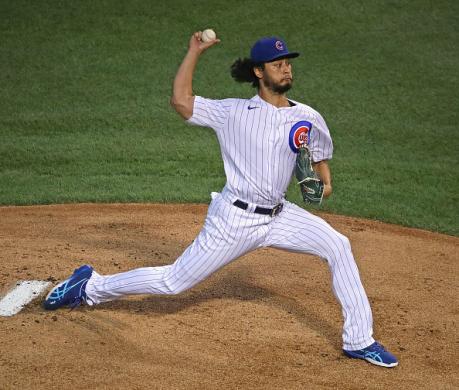 Labor Day signals the high tide of playoff contention heating up and this season aligns with this premise, with a twist. Within a truncated sprint to the finish, there's three weeks remaining and teams will start to differentiate themselves in the standings but owners with an eye on the future can squeeze out some important statistics due to the disparity of games played due to COVID-19 cancellations from the past. Five teams teams enter game play on Monday with at least 23 games left on the schedule:

Starting with the Cardinals, they've added starting pitchers to the bullpen and it's starting to take shape with three straight wins in Chicago against the Cubs cutting the lead in the division to one and a half games after a 7-3 win on Sunday night. During this contest, Génesis Cabrera tossed 1.1 scoreless innings recording each of his outs via strikeout with four swinging strikes of his 19 pitches (21.1 swinging strike percentage). Alex Reyes fired 1.2 scoreless frames with three strikeouts as he adapts to high leverage with strikeout upside:

With so many games on tap, Giovanny Gallegos could rack up saves but Andrew Miller net ancillary ones as well plus Reyes and Cabrera could mine wins working after relievers or in the pending doubleheaders if a bullpen game ensues. A bevy of arms may help St. Louis weather the storm and steal the National League Central if managed correctly.

When looking at hitters, many seem to be ignoring Brad Miller . He's slashing .307/.436/.600 this season through 24 games with five home runs and 34 runs plus RBI. But it's not a super small sample. His last 40 contests yields 142 plate appearances, 12 home runs, 30 RBI and a .317 average with a .683 slugging percentage. It seems like fool's gold, but Miller's expected statistics come with an expected batting average of .323 along with a .625 expected slugging rate. Kolten Wong may be heating up with four multi-hit games over his last seven and Harrison Bader only has nine hits this year, but seven for extra-bases. Deep league owners may kick the tires on him.

Detroit continues to compete this season putting together improved at-bats. Wily veteran Miguel Cabrera extended his hit streak to 13 games on Sunday hitting .400 (20-for-50) in it with a home run and 11 RBI. Victor Reyes may be breaking out atop the lineup without much of the fantasy community noticing. He's racked up three multiple hit contests in a row and in a seven game hit streak going 13-for-30 (.433) with two doubles, two home runs and six RBI. Jeimer Candelario leads the team with 13 multi-hit contests and slashing .352/.426/.519 his last 15 games with 20 runs plus RBI. Willi Castro owns a .428 average his last 11 games with 17 hits in 40 at-bats. His last 30 games comes with a .350/.355/.567 slash with 10 runs, three home runs and 11 RBI. He does not walk much so some regression may be pending but ride the hot streak.

Also of note with the Tigers:

Tarik Skubal said he changed grips on his changeup between starts with help from Matthew Boyd. The extra days between starts allowed him to throw two mound sessions after his previous outing.

Sowing the seeds for next season, Tarik Skubal becomes intriguing if this approach works. He tossed six innings in Minnesota with the new grip allowing two hits, one earned run and two walks with six strikeouts. His bullpen blew the win, but Skubal remains an arm to stream in 12-team leagues going forward with some strikeout upside.

Miami remains alive for playoff contention fueled by the addition of Starling Marte . He recorded a combo meal on Sunday hitting his second home run since joining the team and stole a base in a one run loss at Tampa Bay. Marte gained games played after his trade to the Marlins and could provide some steals with power over his team's last 26 contests. Jon Berti has hit .291 (16-for-55) his last 16 starts with two doubles, two home runs, seven RBI and six stolen bases. He's swiped 16 bases over his last 47 games if he remains on the waiver wire.

What We Are Watching in the Week Ahead

Representing one of the last pitchers standing in Atlanta's rotation, Max Fried owns six wins without a loss this season with a 1.98 ERA, 2.47 FIP and 1.06 WHIP with a 47:17 K:BB over 50 innings. However:

Fried averaged 90.9 mph with the 10 four seamers he threw in the fifth inning. This pitch averaged 93.4 mph in his previous eight starts. It's averaged 91.5 mph today.

For the visual crowd: 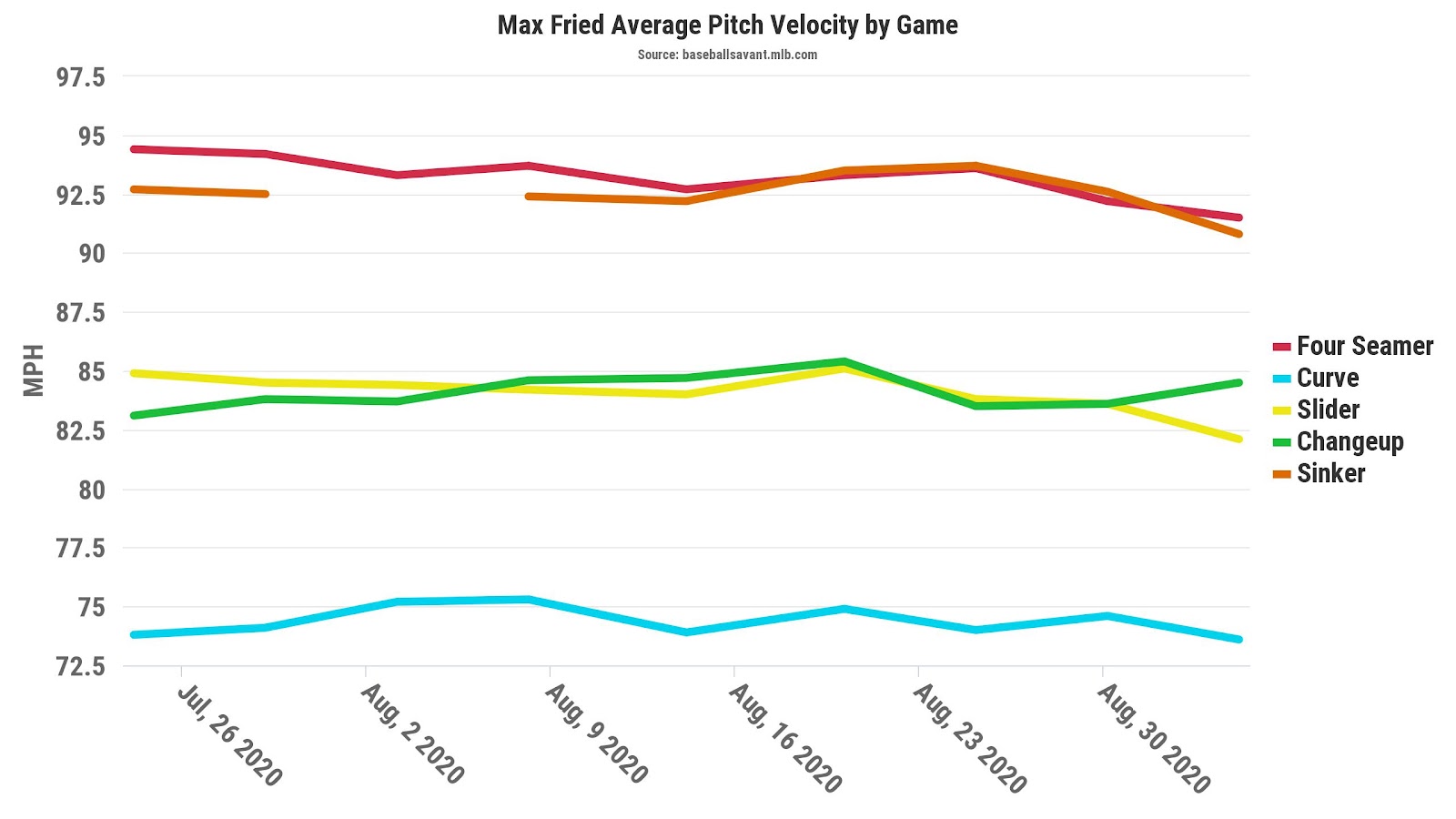 Here's hoping this will be a blip but one which his owners need to monitor going forward.

Many Seth Lugo owners balked when he moved into the rotation, but he's thrived so far making a nice tandem with Jacob deGrom in it. Especially when seeing how these two rate compared to the rest of the staff:

As for deGrom, any debate about if he should go ahead of Gerrit Cole in drafts needs to be shelved:

Jacob deGrom induced 35 swinging strikes today, which is tied for the most in a game since at least 2008. h/t @AndrewSimonMLB

Across the league, starting pitchers continue to average 4.2 innings per start this season and bullpen will pay the price. Teams with relievers able to handle more than one inning like the Cardinals may be difference makers down the stretch. Teams like Houston qualify in this conversation:

But many teams like Toronto need to find ways to weather the storm while staying in playoff contention:

“It’s a grind. These guys, they’re being asked to do a lot right now. And we’re trying to balance it as best we can." https://t.co/zbnGJOmMYw

Toronto could get a boost with the pending return of Ken Giles , but he's not appeared on consecutive days since last July. Adding Rafael Dolis could help those mining for saves even if Giles returns to high leverage since the role could be shared. Bryan Garcia recorded his first career save on Sunday and although his strikeout rate remains low, Garcia's turned in 13 scoreless outings his last 14. Also, do not ignore the below the Blue Jays under the radar power hitter:

Teams should avoid trades with Tampa Bay, right? Those seeking speed should take note of Manuel Margot and Randy Arozarena. Margot's stolen eight bases his last 30 games with a .283/.340/.391 slash with 19 runs plus RBI. His .280 expected batting average and .430 expected slugging (63 points above his actual) hint at some upside going forward. As for Arozarena, he cracked two home runs on Sunday and three this season in only 15 at-bats. He's more known for his speed with one already but stole 61 in 331 minor league games with a 37.1 on-base percent.

Many will dismiss short samples from 2020, and it will need to be researched very closely this winter. However, taking a page from the Yu Darvish breakout which started in the second half of last year:

Yu Darvish has logged 7 starts of 6+ IP and 1/0 runs allowed this season.

The last pitchers to have that many such starts through their team’s first 40 games of a season:

With this in mind, here's his numbers since the All-Star break of 2019:

Next week will focus on taking advantage of the remaining schedules for fantasy purposes for the stretch run. Be sure not to ignore baseball with football on tap and stay with Fantasy Alarm to remain ahead of the competition across all fantasy fronts with unbelievable content. Stay safe and be well.

C. Morton - SP
TB1
Rays declined RHP Charlie Morton's $15 million option for 2021.
A $15 million salary for Morton in 2021 is perfectly reasonable, but it's not terribly surprising that the Rays chose not to pick up the option. General manager Erik Neander did say that the club would be interested in bringing the right-hander back at a lesser salary commitment. Morton will turn 37 in a couple weeks and has discussed the possibility of retirement, for what it's worth.
Added 11:34 am (EST)
Added 11:34 am (EST)

R. Braun - RF
MIL
Brewers declined OF Ryan Braun's $15 million option for 2021.
Braun's contract either called for a $15 million mutual option for 2021, or a $4 million buyout. Unsurprisingly, it appears the Brewers have decided for the latter. The soon to be 37-year-old hit just .233/.281/.488 in 39 games while dealing injuries to his back and finger. It seems plausible that Milwaukee could have interest in Braun at a significantly lowered rate, but it's also possible that the former MVP will either be playing with a new club in 2021 or possibly decide to retire.
Added Yesterday 8:59 pm (EST)
Added Yesterday 8:59 pm (EST)

Z. Britton - RP
NYY1
Yankees exercised Zack Britton's $14 million option for 2022.
With the Yankees picking up the 2022 option, Britton's $13 million player option for 2021 becomes locked in. The left-hander has posted an ERA below 2.00 in each of the last two seasons, and it was 1.89 in 20 games in 2020 with a 16/7 K/BB ratio over 20 appearances with a 1.00 WHIP and .174 BAA. Britton will be a high-leverage reliever again for the Yankees in the next two years, and has a chance to earn save chances -- depending of course on Aroldis Chapman's health/involvement with the organization.
Added Yesterday 6:59 pm (EST)
Added Yesterday 6:59 pm (EST)