Carrasco, Holland and Strasburg get good news. Not so much for Alex Dickerson though. What about Corey Seager... is he looking like he’s on track to dominate starting on day one? 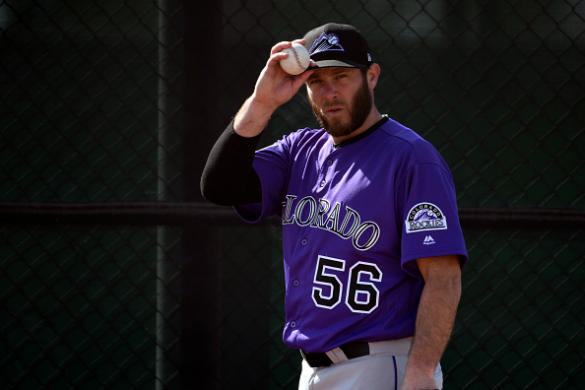 Carlos Carrasco (elbow) said he is feeling better, his arm is good, and that he has been cleared to play some light catch. He will also throw in a minor league or simulated game in a few days. In fact, the team is targeting a Carrasco start on March 24th. "He was originally scheduled to pitch that game. So really it's maybe a two- or three-day delay. It looks like that at this point," said pitching coach Mickey Callaway. I’m not very interested at the moment, and I shared my thoughts in Carrasco Hurt Again.

Aledmys Diaz is going off as a top-10 shortstop option in some formats. I think that’s a little too rich for the Cuban born shortstop. See his Player Profile.

Alex Dickerson is likely to miss 3-4 weeks with a back issue, a disc protrusion. At least it will not require surgery. This gives a shot at extra playing time to speedster Travis Jankowski and Jabari Blash. Jabari has tons of power and a solid walk rate, but it comes with tons of swing and miss stuff as well. The 27 year old outfielder has only 71 big league at-bats but he is locked in right now with a .308/.441/.885 slash line that includes five homers, 13 RBI and 10 runs scored in 13 spring games. I still like Dickerson, but with two options for the Padres to turn to, Dickerson’s star has really dimmed with his back woes.

Brandon Drury might be overlooked in some leagues. His Player Profile explains why that would be a mistake.

Did you miss the Junior Guerra Player Profile?

Greg Holland is likely to begin the year as the Rockies setup man behind Adam Ottavino. I think. Holland worked an inning Wednesday and looked sharp as he needed a mere 10 pitches to record three outs. He also hit 95 mph on the radar gun and threw his slider 84. “When you’re coming back from injury and it’s been awhile since you’ve been in a game, you get pumped up,” Colorado manager Bud Black said. “We’re still looking at the big picture. But he’s crossed some bridges here in Arizona.” The Rockies signed him with the intention, even if they didn’t directly say it, of him closing games. If Holland keeps looking like he did in the first outing that time could come sooner than most of us expected.

I know he isn’t sexy, but you still have five minutes to read Collin McHugh’s Player Profile, right?

James Paxton, people love. Is that faith being placed in the right spot? Check out my Player Profile.

Joe Ross is an arm to target on draft day. See his Player Profile.

People are out of control with their Gray Sanchez love. Just bonkers time with some people. Here is some audio about the Yankees’ catcher. My Player Profile on Sanchez goes deep into the whole situation as well.

Here’s the update on the Max Scherzer situation from Chelsea Janes. (1) Scherzer ditched his three-fingered fastball for his two-finger heater. He thinks that he won’t have to go back to three finger grip anytime soon. (2) Scherzer threw 55 pitches Thursday and believes he is on target to go 70, 85 and 100 in his next three outings. (3) Scherzer will still not commit to being ready for Opening Day. (4) Scherzer is likely to see his next action Wednesday. For more on the whole situation see this MLB.com report.

Corey Seager (oblique) still maintains that he will be fine for Opening Day even though he hasn’t been in a game since March 3rd. Thursday he took 25-30 swings and half speed and reported all systems go. I’m still a bit concerned, but if he plays the next couple of weeks before Opening Day without a setback those concerns will be alleviated.

Dan Straily had a strong season last year given the non-existent cost. How should you be evaluating the righty in 2017? Check out his Player Profile.

Is Adam Wainwright trustworthy after that stinker of a season in 2017? I give my answer to that question in his Player Profile.