Collin McHugh is a better pitcher than the results often say, and given what most think. Can he be a mixed league asset in 2017? 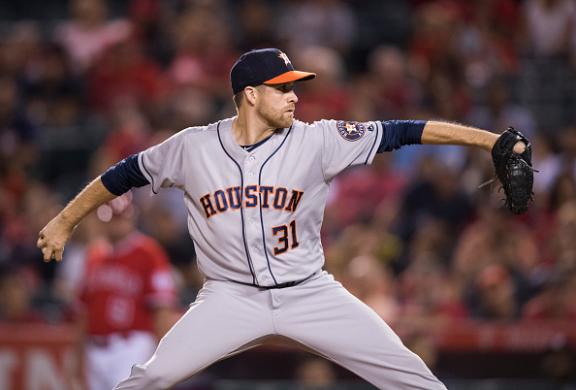 Amongst pitchers who have thrown 500-innings the past three seasons there are only 11 other pitchers, besides McHugh, who can match both of those marks: David Price, Johnny Cueto, Max Scherzer, Corey Kluber, Madison Bumgarner, Jon Lester, Chris Sale, Zack Greinke, Justin Verlander, Clayton Kershaw and Jason Hammel.

That’s a good start for a pitcher we would should have an interest in targeting, right?

Before moving on let’s talk swinging strike ratios. McHugh has a mark of 10.5 percent for his career while posting a mark between 10.3 and 11.0 percent the last three years. What, you thought he wouldn’t be consistent?

McHugh has a ground ball mark of 42.5 percent for his career.
The mark the last three years is 43.1 percent.

Neither of those marks stands out, but both are palatable numbers that leaves McHugh as basically a league average type.

The big fly is next.

McHugh has allowed a fly ball rate of 35.5 for his career.
The mark the last three years is 35.6 percent.

So, we’ve got a righty that is pretty stable, even if he’s not exactly overly exciting. But, there is a nice skillset here that is often overlooked.

McHugh has a 62.3 percent first strike pitch percentage for his career, a strong mark. Last season the rate was 67.0 percent marking a third straight season with an improving number. Moreover, the 67 percent rate was the 6th best in all of baseball last season. He’s not getting behind and beating himself.

McHugh threw his curveball a career-high 30 percent of the time last season. The only pitcher who threw the pitch more last season, amongst ERA qualifiers, was Jose Fernandez at 33.8 percent. Batters have just .216 against the pitch with a .499 OPS for his career, though the pitch was a bit more hittable last season (not that a .601 OPS is impressive). McHugh’s game is get ahead with strikes and put batters away with the curve. Pretty simple stuff.

He was off last season, but only by a little bit, from his career levels.

What about splits? Not much to see with McHugh. Here are the career numbers.

McHugh also hasn’t shown much of a split with the home/road stuff either with batters having slightly more success against the righty on the road.

All and all this is a solid skill set.

McHugh’s locked into the starting rotation as long as he is healthy. The most recent info is that he’s been suffering from nothing other than “dead arm” this spring and there is nothing structural wrong with his wing. At this point, the team is still hopeful that he won’t miss much time at all once the season begins. "Usually it was something that (forced) you out of baseball back in the day," McHugh said. "Now you use it as a term for fatigue and general soreness. I wouldn't call it pain because you learn to differentiate between pain and soreness pretty early on." The issue is his enigmatic rotator cuff. "I would throw for a week and then it just wouldn't feel right. So, I'd have to shut it down for a week, do my physical therapy, and then try to build it up again, and it didn't feel right still. Then I shut it down for a week or two. I feel like we finally made that jump when we got to camp." McHugh is now focusing on rotator cuff exercises and feels like that is helping a lot, as well as leaning on acupuncture and hot/cold treatments.

As of this writing, here is McHugh’s ADP data.

McHugh is kinda just a guy, one with some health concerns, but that represents a nice buy-low opportunity. McHugh strikes out a good deal of batters, doesn’t walk many, and is consistency solid falling into the realm of the Gio Gonzalez and Ian Kennedy’s of the world. He has a nice mix of strikes and walk avoidance and should be a consideration to round out your staff in mixed leagues.

10-Team Mixed:  If you roster seven or eight starters in this format you could look his way. Ideally, he’s best utilized as a pickup off waivers in-season once he proves himself to be fully healthy.

12-Team Mixed: If he’s my 7th starting pitcher, I like it. I’ll take that shot at that cost.

15-Team Mixed: Even more interesting here than in the shallower formats, if your league has DL spots then interest is driven a bit higher. He’s not winning the Cy Young award, but with health he should outpace his draft day cost.

AL-Only League: I’m investing. Even with health concerns, I still have interest in McHugh because the cost is depressed with Collin getting hardly any push nationally thanks in no small part to the concerns with his arm.

B. Buxton - CF
MIN
Buxton (shoulder) has been given medical clearance to swing a bat and the Twins expect him to progress to hitting off a machine later this month, the Minneapolis Star Tribune reports.
For a full breakdown and detailed player analysis GO PRO and join the Fantasy Alarm Family! CLICK HERE to unlock your PRO package and take advantage of instant savings!
Added Yesterday 9:59 pm (EST)