Will a throwing change help Strasburg? Will a grip change work for Scherzer? Who is the Braves’ rookie Swanson and should you really care? 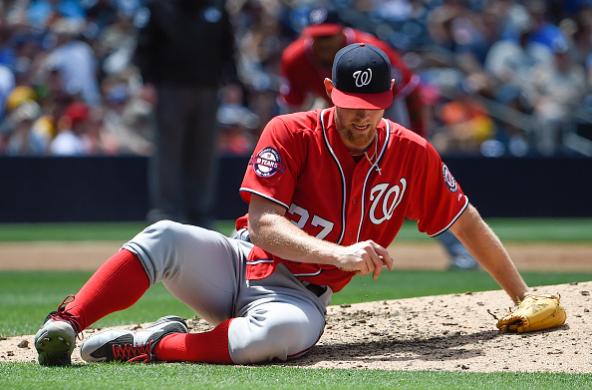 Stephen Strasburg knows his history. He’s lived through all the rehab assignments, all the frustration, and he’s trying to do something about it. He’s decided that he’s going to eliminate the windup from his game and go exclusively out of the stretch. “I’m not trying to reinvent myself but trying to simplify things as much as I can and be able to repeat my mechanics.” he said. Strasburg noted how he often just didn’t feel right out of the windup, so he’s trying to simplify things. Strasburg is also changing up his non-game day routine as well. He will throw less between starts this year than in years past which sounds like a good idea. The biggest change those is that he is planning on cutting down the use of his slider. “It’s a pitch that I still want to throw, because I think it’s effective, but (only) to certain guys,” he said. Last year batters posted a mere .660 OPS against the slider last year as batters posted a mere .278 wOBA against the pitch. Lessoning the rate he throws it could hurt his effectiveness a bit, but we would all allow that if Strasburg could somehow start to consistently throw 185-innings.

Clayton Kershaw’s back appears to be fine. He also delivered three scoreless and hitless innings Tuesday against the Giants. While he’s trending upwards we’ve got Max Scherzer doing... a three-fingered fastball? “It is strange I’m throwing with three fingers,” Scherzer said. This is odd, for those of you who aren’t aware, that you should only be using two fingers. The third is needed cause of the injured knuckle he is dealing with. “If they didn’t let me do this, then I’d be sitting here trying to test the two-finger grip left and right, and probably be hurting it even more,” Scherzer said. This makes me nervous. It’s one thing to tweak your grip slightly. It’s another thing to say that you’re adding a finger to the mix. Throwing a three-fingered fastball has the hallmark of desperation to me. He’s dropped another spot in our Rankings.

Christian Bethancourt is serious about pitching this season. That means he will likely see time in the outfield and on the hill this season. He could also catch at some point giving him potentially immense value in NL-only leagues. "We'll figure out a way to navigate it," Padres’ manager Andy Green said. "Those are the simple parts. The hard part, honestly, is he's got a lot of work to do to prove that he's a Major League-caliber pitcher. He's got the makings of that. But he's got a short window to make that happen.”

It’s one outing, but Archie Bradley allowed six runs while generating only four outs Tuesday. He has a chance to seize a starting spot, but he continues to be inconsistent from outing to outing despite his big arm. Teammate Shelby Miller hit 99 mph in an outing last week and everyone was all interested in him again after his disastrous effort last year (6.15 ERA over 20 starts). Where are you at now folks after Miller allowed six runs while picking up eight outs Tuesday? Don’t get too high, or fall too low, over one outing. It’s the classic mistake people make this time of year.

This is one way to use a shark costume.

Lonnie Chisenhall might have a few uses this season. See his Player Profile.

Things are so concerning with Matt Harvey that we’re getting reports about his bullpen sessions now? Up to you, but I’m not buying that as anything meaningful.

Dallas Keuchel will make his Spring Training debut Sunday against the Nationals. He is still hoping to be ready to take his turn the first time through the rotation this season for the Astros.

The LABR expert’s drafts took place this past weekend in Phoenix Arizona. Check out the review of the National League as well as my thoughts on my American League squad.

Can Michael Pineda ever figure it out? I break down his chances in his Player Profile.

Josh Reddick isn’t someone to get excited about. See his Player Profile.

Does the spot a hurler holds in his team’s rotation really matter? I don’t think it does, at least nowhere near the level that some folks seem to believe it does. See Do Rotation Spots Matter?

Some are worried about Chris Sale, at least a little bit. Check out his Player Profile to see why you should have no concern.

I really, I mean really, don’t know what to say about this.

Dansby Swanson is missing some practice time with back tightness. Should be nothing major, and he is fully expected to be fine in a few days. Wanted to pump the breaks a bit on him though. People seem to be expecting some massive effort from him. A tremendous all-around baseball player, Swanson should play this game at a high level for the next decade. Still, don’t mistake his offensive game for that of Carlos Correa or Corey Seager. It’s much safer to compare him to Brandon Crawford this season.

Women are playing professional baseball right now. Could we one day see a female in the major leagues? Don’t think for a second that we won’t if a woman is good enough. Here are the fabulous five.

Am I the only one who really isn’t jazzed by the WBC?