No one was talking about Jose Ramirez 12 months ago. Now there are folks who are willing to make him their starting third baseman in ’17 in mixed leagues. 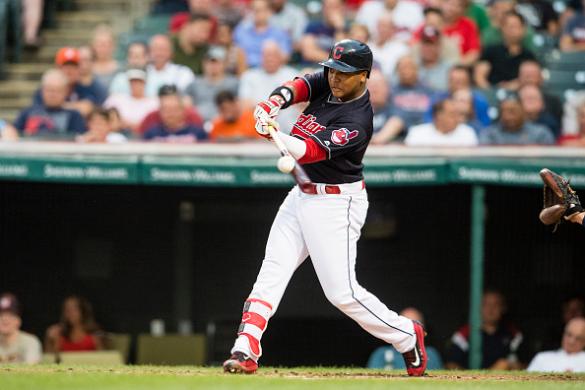 We have only 332 games of big-league experience to discuss with Ramirez. Forty-six percent of his big-league experience was accrued last season. As noted elsewhere (Sample Sizes and What They Mean in the FA Draft Guide), basing a player's projected performance in the coming season solely off of the previous effort is a risky bet to place. The difficultness of the current situation is exacerbated by the fact that Ramirez has been two different hitters at the big-league level in the batting average category.

Pretty much the same. A little better in one, little worse than the other, but sameish across the board

A substantial change here. From 2013-15 his GB/FB ratio was 1.44. Last season the mark was 1.13. What makes the success he had last season somewhat problematic is the fact that the “change” he made isn’t necessarily a good change for a player with this skill-set. A little fella without elite pop shouldn’t be lowering his ground ball rate while increasing his fly ball mark. That’s not a good change. It’s also not the type of change that leads to a .073 point batting average increase either. More fly balls equal more outs, especially when a guy is a league average (at best) power bat.

Ramirez hit the ball a hit harder. Good for him. Still, his hard hit ball rate last season was not good. Here’s the context. The 2016 MLB Hard Hit average was... 31.4 percent. Ramirez wasn’t even close to the league average.

He pulled a few more balls. Fine. No big change there really. By the way, the league average last year was 39.7 percent.

The BABIP was significantly higher. He’s speedy. He hit the ball a hit harder. He hit a few more line drives. All true. Still, I don’t believe those three things should have led to a .071 point addition in BABIP, but it’s interesting that the growth in BABIP is nearly identical to his mark in batting average.

So, I really can’t explain the explosion in batting average, yet.

Let’s talk splits. Here is his batting average as a big leaguer.

Last season he had a .150 Isolated Power mark. The league average last year was .162.

Last season he had a 6.0 percent HR/FB ratio. His career mark is 5.6 percent. The league average last season was 12.8 percent.

He’s not likely to move the needle at all in the homer category.

It’s also highly unlikely that his RBI total will increase, and it’s more likely than not that it will decrease slightly.

If he bats .275, as seems more likely than .312, his OBP will dip to the point that he’s kinda just a guy in on-base percentage meaning he will need to be in the lineup and play 150 games to have even a break-even chance of matching the 84 runs he scored last season.

He has some nice wheels.

Oddly, his Speed Score was 5.5 last season, a four year low after three seasons of 6.6, 6.3 and 5.5 (the league mark was 4.4 last season and a mark of 5.5 is above average). That’s kinda odd. It’s also a bit concerning when you note that he doesn’t seem likely to drastically increase his stolen base attempt total with the Indians. To sum up, 20 steals is doable. A run to 30 seems unlikely.

He will enter the 2017 campaign qualify at third base and the outfield.

As for 2017, Ramirez is set to be the third baseman in Cleveland. There are no plans for him to play in the outfield, and with Francisco Lindor at the shortstop position in Cleveland, it’s likely third or bust for Ramirez this season.

As of this writing, here is Ramirez ADP data.

*Position rank is for third base.

Ramirez has dual position eligibility, and he’s got nice speed. That plays in 2017. Same time, the overall game leaves me wanting more so I fear that some folks will be disappointed given their investment level in Ramirez.

10-Team Mixed: He doesn’t move the needle here at all. Ten homers, 20 steals, a .280 average... if that’s who he is you will be falling behind if you start him at third base or in the outfield.

12-Team Mixed: A corner infield option. A depth outfield option. A nice late addition, but not a difference maker or someone who should be expected to fully repeat last season.

15-Team Mixed: The speed element helps to boost Ramirez into starting status here. Same caveats of course apply, but there are worse things to do then add a guy with speed who covers two defensive spots as it gives you lots of flexibility once injuries strike.

AL-Only League: The position thing, the speed thing, makes Ramirez a solid target that’s worth adding a buck to, or bumping up a round, all things being equal.