There’s a lot to know when we’re breaking down players in the fantasy game. One measure, which too few people know about or understand, is contact rate. This article will introduce you to contact rates and why they matter. 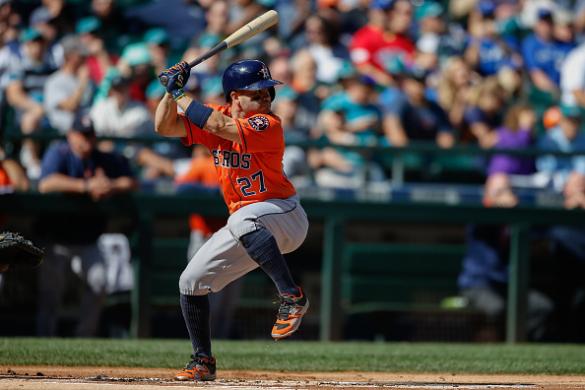 Contact rate is simply putting the bat on the baseball. Very simple to figure out it is as well.

Simple. Eloquent. Sometimes those are the best measures.

WHAT IS THE LEAGUE AVERAGE?

The league average has been dwindling the past few years as more and more “sluggers” take the field, and strike out with reckless abandon.

As you can see, the number is slowing coming down, and last season was the worst mark of the last seven years.

The two middle columns have a wide dispersal of possible outcomes.

If a player is at 0.69 or worse the odds are low a player will hit even .250 consistently.

WHY DOES IT MATTER?

Doesn’t hitting the ball matter? We poo-poo strikeouts saying things like “everyone does it,” but it’s not a good thing. It ain’t. Nothing positive comes from failing to make contact (other than maybe failing to ground into a double-play). A guy might mash homers – I’m looking at you Chris Carter, Mike Napoli, Chris Davis types – but are they really a “good” hitters? Not really. Putting the bat on the ball gives you massive amounts of positive outcomes (a hit, an error, moving a runner over etc.) whereas there are hardly any when you fail to make contact on a swing.

Here are some numbers to know.

Joe Panik hit over .300 his first two seasons before dealing with injury woes last season. He should rebound.

Now the batters that didn’t qualify for the batting title.

The first thing you notice if you scan this list is that it’s pretty much devoid of power. The top-17 men in this grouping... nary one hit 15 homers.

Ben Revere had a disappointing season, but he still made contact at an elite rate.

Matt Holliday wasn’t his normal self last season, and will never be again. Still, he’s far from someone to completely ignore on draft day. There are still skills present if he can stay healthy.

Trea Turner’s 0.81 mark was solid indeed, but it’s yet another reason to believe his batting average will be closer to .290 this season than the batting mark he posted last season (.342).

Justin Bour had a much higher mark than one would think given his apparent approach/swing. Something to keep in mind with the Marlins’ first sacker.

0.65 – Tyler Naquin isn’t going to repeat what he did last season. See his Player Profile.

0.60 – Byron Buxton simply must make better contact to take advantage of his elite base running skills.

C. Morton - SP
TB1
Mark Feinsand of MLB.com reports that the Braves and right-hander Charlie Morton have agreed to a one-year, $15 million deal.
It's the largest free agent contract thus far. Morton became a free agent at the end of October after the Rays declined a $15 million club option for 2021, but he ended up getting the same salary on the open market. And a big bonus is that he managed to stay close to home, as was his wish. The 37-year-old posted a disappointing 4.74 ERA and 1.395 WHIP in 38 regular-season innings (nine starts) this past season, but he showed an uptick in velocity along with better results during the Rays' postseason run. He'll join a Braves' rotation which has already added Drew Smyly this offseason. If Mike Soroka can come back healthy, this rotation could be dominant. Morton was originally drafted by the Braves in 2002 and pitched one season for the club before being traded to the Pirates in the Nate McLouth deal.
Added 9:17 am (EST)
Added 9:17 am (EST)