Matt Selz gives you a break down of the top prospects and which ones to watch for the Pittsburgh Pirates Farm System in the latest MLB Farm Report. 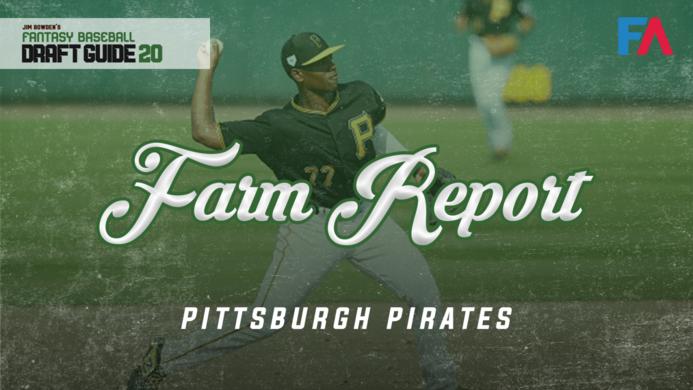 After making a few playoff runs in a row with a solid core of players and home-grown talents, it’s time for the Pirates to rebuild. The good news is that they have been drafting very well for years since that’s what they are built on, much like several other small-market teams, so they aren’t quite as far behind the eight ball as some others are. A few of their top prospects are ready to make major league impacts now or at least in the next year while a few of their other top prospects are further away but still just as promising. The foundations of their recent playoff runs are present in the current crop of prospects coming up through their system right now.

Hayes was the second first-round selection of the 2015 draft for the Pirates with the...

R. Braun - RF
MIL
The MLBPA lists Ryan Braun as a free agent.
Braun's contract either called for a $15 million mutual option for 2021, or a $4 million buyout. Unsurprisingly, it appears the Brewers have decided for the latter. The soon to be 37-year-old hit just .233/.281/.488 in 39 games while dealing injuries to his back and finger. It seems plausible that Milwaukee could have interest in Braun at a significantly lowered rate, but it's also possible that the former MVP will either be playing with a new club in 2021 or possibly decide to retire.
Added Yesterday 8:59 pm (EST)
Added Yesterday 8:59 pm (EST)

Z. Britton - RP
NYY1
Andy Martino of MLB.com reports that the Yankees are exercising Zack Britton's club option for 2022.
With the Yankees picking up the 2022 option, Britton's $13 million player option for 2021 becomes locked in. He'll make $14 million in 2022. The left-hander has posted an ERA below 2.00 in each of the last two seasons, and it was 1.89 in 20 games in 2020 with a 16/7 K/BB ratio over 20 appearances with a 1.00 WHIP and .174 BAA. Britton will be a high-leverage reliever again for the Yankees in the next two years, and has a chance to earn save chances -- depending of course on Aroldis Chapman's health/involvement with the organization.
Added Yesterday 6:59 pm (EST)
Added Yesterday 6:59 pm (EST)

P. Venditte - RP
MIA
Marlins outrighted SHP Pat Venditte to Triple-A New Orleans.
Venditte was reinstated off the 60-day injured list before being outrighted off the 40-man roster -- and the Marlins did the same with Josh A. Smith and Mike Morin. The both-handed pitcher threw 4 1/3 scoreless innings with five strikeouts and no walks before suffering a right oblique strain in the middle of August. Venditte, Smith and Moran are all expected to become free agents.
Added Yesterday 6:15 pm (EST)
Added Yesterday 6:15 pm (EST)

M. Morin - RP
MIA
Marlins sent RHP Mike Morin outright to Triple-A New Orleans.
Morin was one of three pitchers that were reinstated from the 60-day injured list only to be outrighted off the roster. The right-hander was placed on the IL with a right elbow UCL injury in August after appearing in just three games. He's expected to become a free agent after refusing the assignment.
Added Yesterday 6:15 pm (EST)
Added Yesterday 6:15 pm (EST)

J. Smith - RP
MIA
Marlins sent RHP Josh A. Smith outright to Triple-A New Orleans.
The Marlins need to clean up room on the 40-man roster, so Smith along with Pat Venditte and Mike Morin have been removed from it. The right-hander was ineffective in his 16 games and 26 1/3 innings with a 6.84 ERA and 1.67 WHIP. The expectation is that all three pitchers will become free agents, so Miami no longer has a monopoly on the Josh Smith market.
Added Yesterday 6:14 pm (EST)
Added Yesterday 6:14 pm (EST)

D. O'Day - RP
ATL
Braves declined the 2021 club option of RHP Darren O'Day.
O'Day could have been brought back for $3.5 million in 2021, but the Braves have decided to instead pay a $500,000 buyout. The 38-year-old posted a sparkly 1.10 ERA with a 22/5 K/BB ratio over 19 appearances. The 38-year-old right-hander could be of interest to Atlanta at a lower salary, but other teams needing help from a right-hander in the bullpen will also assuredly be interested, as well.
Added Yesterday 4:48 pm (EST)
Added Yesterday 4:48 pm (EST)

P. Gosselin - SS
PHI
Phillies placed INF/OF Phil Gosselin on outright waivers.
Gosselin is one of four players to be removed from the 40-man roster by the Phillies on Thursday. The versatile infielder-outfielder posted a .726 OPS in 39 games with three homers and 12 RBI over 92 at-bats. Because he can play all over the field, there should be interest in Gosselin's services this winter -- assuming he clears waivers and becomes a free agent.
Added Yesterday 4:39 pm (EST)
Added Yesterday 4:39 pm (EST)