Fantasy Football Waiver Wire: The Seahawks Defense Is A Must 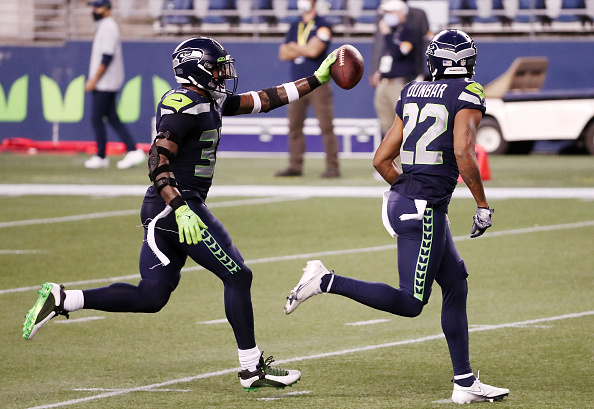 Your top waiver wire adds on defense this week should be the Seattle Seahawks.  Yeah, I just said that. The Seahawks and before you start coming at me about how they have been among the worst defenses in fantasy this season given the copious amounts of yards and points allowed this season I think you just need to hear me out on this one. Yes, I will admit that as it stands today, the Seahawks defense ranks 18th in fantasy points…I bet that’s better than you expected. Their early season struggles, and barrage of points allowed has kept them for eclipsing six fantasy points just once this entire season and that was back in Week 3 against the Cowboys. However, they have one of the best, if not the best, schedules to close out the fantasy football season. Don’t trust me? Take a look at what they have on the schedule from Weeks 12-to-15 and then doubt me.

In Week 12 the Seahawks find themselves on the road against the Philadelphia Eagles. The Eagles offense ranks 28th per DVOA rating with the 30th ranked DVOA passing offense and the 15th ranked DVOA rushing offense. Seattle rushing defense actually ranks 9th per DVOA this season, so what we have here is one of the leagues worst passing defenses against one of the leagues worst passing offenses. So, who is going to win this battle? Well, to me, if you have seen the Eagles play lately, it seems pretty clear that Seattle has a good shot at this one. A few weeks back I wrote about the struggles of Carson Wentz and the Eagles offense. The Eagles offensive line ranks 30th in passing blocking efficiency per ProFootballFocus. PBE measures pressure allowed on a per-snap basis with weighting toward sacks allowed. They have allowed 30 sacks which is almost double the next team. Wentz has been saved on 23.9-percent of his drop backs and has been pressured on 36.6-percent. Due to his lack of time in the pocket we can likely see why he has thrown 14 interceptions on the year while being sacked a league high 40 times. In recent weeks the Seahawks defense is starting to step up the pressure, notching at least three sacks in four straight games with a seven-sack performance against the Bills in Week 9. Earlier in the season they actually had an interception in every game until that Week 9 contest snapped their streak of eight straight. So, this week they face a QB that has been sacked the most in the league and is prone to interceptions.  Feels like that one checks all the boxes. Let’s move on to the rest of the schedule, shall we?

In Week’s 13 and 14 they draw the teams from New York…well New Jersey…but yeah, you get it. The Giants and Jets both come INTO Seattle here.

Let’s start with the Giants. You know how I told you the Eagles offensive line ranks 30th in Pass Block Efficiency, well the Giants rank dead last, having allowed a league high 142 pressures and 111 hurries to Daniel Jones. Not shock that Jones has been sacked the fourth most times in the NFL this season for that reason. In fact, Jones has been pressured on 42.9-percent of his drop backs this season…. let that number sink in there. He has been sacked on 18.3-percent of his drop backs on the year. Jones himself is also highly turnover prone, with nine interceptions and seven fumbles on the season. Again, looking good for this Seattle defense.

Onto the Jets, well, just like the Eagles and Giants, they too have offensive line problems. In terms of Pass Blocking Efficiency, you guessed it, they sit 31st having allowed 135 pressures. Joe Flacco and Sam Darnold have been sacked 26 times this season which would be tied for seventh most in the NFL. Both saw pressures on 40-percent of their drop backs this season. The Jets are also a winless team that ranks 31st in offensive DVOA. Just another juicy matchup on the schedule.

Week 15 sees Seattle again on the road but, also facing another bad offense in the Washington Football Team. Per DVOA, Washington’s offense ranks 30th this season. Now, Alex Smith under center is an improvement from Dwayne Haskins and Kyle Allen , but that said, they are still struggling to put up fantasy points. Smith has already been sacked 12 times this season in just four games while having thrown just two touchdowns with four interceptions. The pressure numbers are better for Smith than the previous quarterbacks however he still finds himself pressured on nearly 30-percent of his drop backs while being sacked on 29-percent. Washington has done a lot better job running the football of late but again that is where the Seahawks have actually been solid this season so will Alex Smith be able to find success throwing the football or will the Seahawks recently improved pass rush get him to make some mistakes.

If you make it to Week 16, championship week for most, you may need to look in a different direction. I do say may, as the Seahawks will be home against the Rams. They went on the road in Week 10 to face the Rams and allowed just 23 points while sacking Goff three times and recovering a fumble. It’s not earth-shattering production and it’s certainly a low upside play but they will at least be home and we know at times Goff can shrink in the moment.