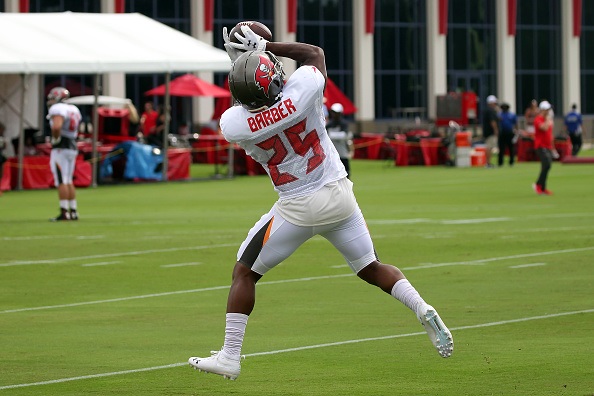 Every year we see numerous players that were drafted in the latter stages of our leagues, or even go undrafted, that break out and become the next biggest thing. A lot of the time we label players like that as “sleepers”, which is what this article is going to be all about. Who are this year’s sleepers at the running back position? Let’s dive in and pick out some winners!

A consensus fourth-round pick, we’re considering Ingram a...SLEEPER? YES! That is correct. It is no coincidence that in the four seasons Ingram has surpassed 200 total touches (carries & receptions) that he has eclipsed 1,000 total yards and has scored at least six touchdowns. In the three years he saw over 250? 1,100-plus yards and nine or more trips to paydirt. Why is this relevant? Well, because he will be given every opportunity to be THE featured member of this Ravens offense. Lamar Jackson may be the one being talked about, but it’s because everyone is unsure if he can run an offense and when the passing game breaks down, they’ll turn to Ingram a LOT. Ingram is currently RB21 on Fantasy Alarm’s ADP page and he has so much more potential than that. During the 2017 campaign, the season he touched the rock 288 times, he ended up RB6 in PPR formats. He has decent back-up’s, but this is the first year of his three-year deal with Baltimore and the former Heisman trophy award winner is ready to shine and finish the year as an RB1. 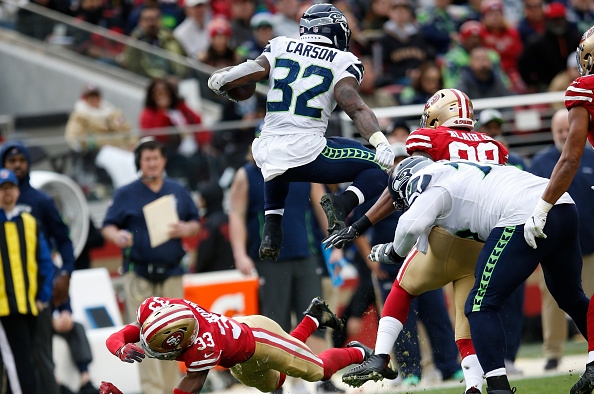 Just like Ingram, Carson has been selected as RB2 in most drafts with an ADP currently of 55.73. The thing is, everything we hear from Seahawks camp makes us believe he could end up a top-10 fantasy back this year. Offensive Coordinator Brian Schottenheimer thinks Carson should see at LEAST 50 targets this season in the passing game. So if he sees 50 targets, how many is the almighty pass-catching back Rashaad Penny seeing? Carson did it all as the Seahawks RB1 last year rushing for 1,151 yards on 247 attempts, which was good for 4.7 YPC. He only saw 24 targets last year and Penny wasn’t involved with the offense, so 26-plus more targets and it doesn’t seem like Penny carries much weight again! Let’s not forget the Seahawks lost top wide receiver Doug Baldwin and although they replaced him in the draft, don’t expect D.K. Metcalf to suddenly see 100-plus targets in his rookie season. That only means the Seahawks will be even more focused on running the football than they have been. Everything points to Carson finish the year as an RB1 even though he’s currently ranked RB25.

We all know how well Phillip Lindsay performed last year as the starter, but all signs are pointing to Freeman surpassing him on the depth chart this season. We also know Freeman to be more physical and a better pass blocker, so we should see him on the field more often as the team looks to protect Joe Flacco a year removed from a hip injury that allowed Lamar Jackson to take over as QB1 in Baltimore. The two backs are very similar to what Devonta Freeman and Tevin Coleman once were in Atlanta as Coleman was more of the pass catcher, change of pace shifty back while Freeman was your first and second-down back running between the tackles. Because of his run style, Freeman will also get a lot more work within the red zone. We saw him score all five of his touchdowns within the red zone last year.

There are few names on here that are by no means sexy, but they get the job done. Barber had nearly 1,000 yards from scrimmage last year as the Bucs primary running back and what’s to say he couldn’t do it again? Ronald Jones has gotten all the hype in the world since being drafted last year, but we haven’t seen it translate to any sort of production on the field. The Bucs showed their consistent offensive play calling last year when Barber saw 11-plus carries in each of the final 12 weeks of the year and saw 14-plus in the last seven. This isn’t a comparison between Barber and David Johnson , but with Bruce Arias calling the shots, David Johnson touched the ball 373 times and went for 2,118 all purpose yards back in 2016. Again, they’re different players, but that just gives you an idea of how much Arians likes featuring his running backs. Barber could end this season a solid RB2/FLEX and is being drafted as an afterthought at this point.

In somewhat of a consensus pick, everyone and their mother thinks at some point this season Singletary will be the Bills featured back. It’s hard not to note LeSean McCoy ’s downright horrendous 2018 season and the fact that Frank Gore could potentially need a pair of crutches just to walk by Week 5. The Bills took Singletary in the third-round and with how young the team is already, it makes sense to build up the chemistry between second-year quarterback and rookie running back if they have viewed them as key cogs in their future plans. In his final two seasons at Florida Atlantic, Singletary saw 562 carries and scored 55 total touchdowns, so it doesn’t seem like his diminutive frame will hold him back from being a multiple down RB in the NFL. Obviously not all collegiate athletes are the size of NFL defenders, but it is a good indication that he’s used to being a “bell cow” and that could help him when he ultimately becomes one for the Bills this season.

Look, not many 34-year-old running backs are still viable options in fantasy leagues, but we said the same exact thing during his Age 33 season and he rushed for 1,042 yards and seven touchdowns. In 12-team drafts, Peterson is slipping all the way to the 11th round, and the back end of the round at that. Derrius Guice may be posting workout videos and head coach Jay Gruden may be talking about how good he looks, but we haven’t seen it in practice and we’ve already seen two preseason games come and go without Guice present. When Guice is healthy, he is going to burden a large chunk of the workload, but WHEN will he be healthy? Health has been his primary issue dating all the way back to his days at LSU. If you’re looking for a late-round sleeper that could help your team immediately, Peterson fits that bill. 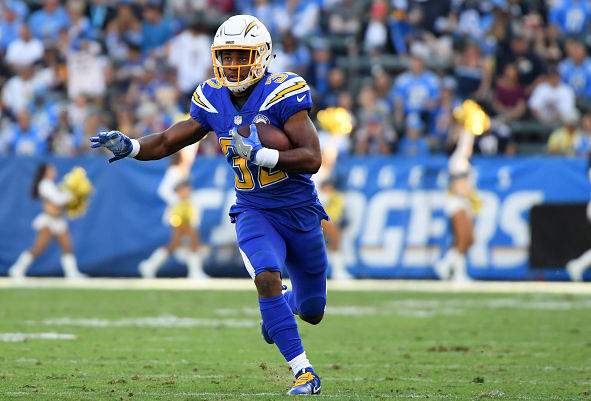 Everybody is talking about Austin Ekeler and rightfully so, but let’s not lose sight of the upside Justin Jackson showed last year and could potentially show this season. Obviously the Chargers backfield and really their offensive value is contingent on what happens with Melvin Gordon . We’re all being super reluctant to draft Gordon after what played out with Le’Veon Bell last season, so we’re just kind of moving forward with the notion Gordon won’t play for the Chargers again. Ekeler saw the brunt of the work last year as Gordon’s backup and even in the three games Gordon missed. But in those three games, Ekeler did not impress. Jackson currently sits 11th all-time in NCAAF history in rushing yards. He didn’t get much of an opportunity last year being the Chargers third running back, but had 341 yards from scrimmage and two touchdowns on 65 touches. Jackson is currently being drafted 70 spots behind Ekeler and the former’s value seems like the winner between the two.

It’s not sexy, eye-popping or even game-changing, but we’ve seen for years now that Anderson can be a very quality back when given the opportunity. Kerryon Johnson is going to have every opportunity to be the Lions RB1, but Johnson only carried the ball 118 times during his rookie campaign. The Lions also lost their rushing attempt leader from a year ago in LeGarrette Blount (154) and leading pass catcher out of the backfield in Theo Riddick (61 REC). The door is open for Anderson to take on a prominent role in the Lions backfield. Not once last year did Johnson exceed 19 carries, but Detroit still managed 404 carries as a team, which means they often use multiple backs per game. Anderson has proven himself to be a viable runner in years past as he’s averaged 4.5 YPC for his career and also as a respectable pass catcher, twice catching 40 passes in a season. Not to mention how valuable he’d become if there were an injury to Kerryon Johnson at some point. We did see Johnson only play 10 games last year. Just throwing that out there as well. Anderson could be a really strong RB4/5 to own heading into this season.