James Grande is here to look around the Fantasy Baseball waiver wire to point out some interesting names to consider heading into the next week of the MLB season. 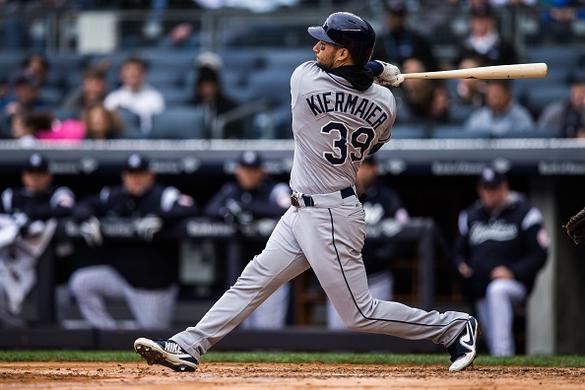 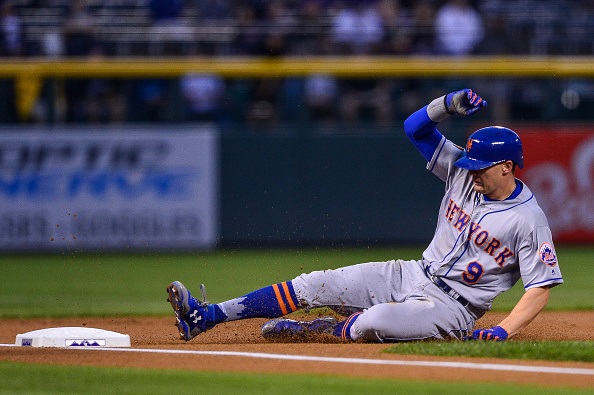 Brandon Nimmo , NYM OF (66% ownership), FAAB Bid - $18-20 - You’d be a fool not to pick Nimmo up if you have the opportunity to do so. He’s homered four times over his last six games, is currently riding a mini four game hit streak in which he has 10 hits in. He’s well on his way to a 20-20 season as he sits at 12 homers and seven stolen bases, so realistically he could maybe go 25-25 if he turns things up on the base paths. The 25-year old Nimmo has a 1.001 OPS this month and this would be the second month of the season in which he posted an OPS north of 1.000. He’s everything you want in a fantasy player and more.

Eduardo Rodríguez , BOS SP (77% ownership), FAAB Bid - $15-17 - For one reason or another, Rodriguez isn’t owned nearly as much as he should be in Yahoo! leagues. It could be because his inability to pitch deep into games, but that hasn’t stopped him from being productive. Although he hasn’t completed seven innings once this year over 14 starts, Rodriguez is 9-1 with an elite 27.3-percent K-rate. His groundball rate is seven percentage points better than it was last season and his SwStr is up and his hard-hit rate is down. If he ever figures out how to stop throwing so many pitches early on in games, he could be an elite fantasy commodity..

Zack Godley , ARI SP (74% ownership), FAAB Bid - $13-14 - Godley finally looks like the pitcher we saw all of last year. In three of his last four starts, he’s allowed two earned runs or less, struck out seven and picked up a win. The K-rate is beginning to creep back up towards where it was last season as it’s now at 22.3-percent. The issue has seemingly been the home run ball as his HR/FB rate sits at 17.2 and he’s at 1.28 HR/9, which are both way higher than last year. Godley relies on ground ball outs, so if he’s giving up homers it’s a bad sign.

Domingo Germán , NYY SP, RP (31% ownership), FAAB Bid - $11-12 - Over his last three starts, German has struck out nine, ten and nine and has posted a quality start in all three. The 10.74 K/9 is no joke and with Jordan Montgomery done for the year, German could really stick in this rotation for the long haul if he continues pitching the way he has. What’s even crazier is that his 3.52 xFIP and 3.35 SIERA tell us that’s his numbers will continue to improve and his 4.77 ERA is a fluke. If German can get better from here than sky's the limit for the young hurler.

Kevin Kiermaier , TBR OF (22% ownership), FAAB Bid - $9-11 - Kiermaier was activated off of the disabled list before Tuesday’s game, prompting his return from a long DL stint. When healthy, Kiermaier is electric in a bottle, but he can never stay healthy which limits his long term value. Last year in just 97 games, he belted a career-high 15 home runs while also stealing 16 bags. He’s an obvious 20-20 guy if he can just play an entire season. He’ll hit leadoff for the Rays for the remainder of the season.

Michael A.Taylor, WAS OF (40% ownership), FAAB Bid - $9 - Taylor has enjoyed a really nice month of June slashing .429/.487/.600 thus far. He’s been a maniac on the base paths as well notching six stolen bases in his last seven appearances, giving him 21 on the year which is already his career high. The reason I prefer someone like Kiermaier to Taylor despite Taylor’s ability to steal multiple bases in a game is that he’s only playing about two games a series due to Washington’s outfield depth. In league’s that focus on stolen bases, he’s your guy, but if they’re an afterthought, so is he. 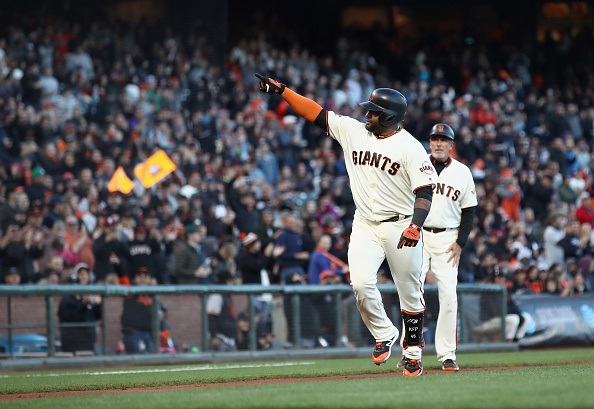 Gerardo Parra , COL OF (7% ownership), FAAB Bid - $7-8 - With David Dahl on the shelf, Parra has really been able to get regular at-bats and settle in at the plate just like he did last season. He’s up to .300 on the year thanks to a .329 mark in May and now .367 in June. He has eight RBI over his last five games and he still gets to call Coors Field home, so the run producing opportunities and great hitting conditions at all times won’t stop anytime soon.

Pablo Sandoval , SFG 1B, 3B (4% ownership), FAAB Bid - $4 - With Evan Longoria on the shelf for 6-to-8 weeks, Sandoval should see ample playing time at 3B for the interim. Against right-handed pitching this season, the Panda has a .311 AVG and .879 OPS. His five homers and 22 RBI against RHP are quite impressive seeing how they’ve only come over 103 at-bats.

Brandon Maurer , KCR RP (1% ownership), FAAB Bid - $1-2 - I’m not excited by any means of the prospects of picking up Maurer, but he could be named the Royals closer which gives him some appeal. He has the most experience on the Royals staff in terms of saves as he picked up 22 in 2017 and 13 back in ‘16 as well. The issue is his ERA stinks and he hasn’t really gotten many people out this season. If he is given the job, he’s worth a deep league add.

MLB Kiermaier (wrist) in Rays' lineup for Game 1 of WS

M. Muncy - 1B
LA1
Max Muncy (head) told FOX Sports' Ken Rosenthal that he is "fine" for Game 1 of the World Series on Tuesday night against the Rays.
Rosenthal provided that update live on MLB Network. Muncy took a ground ball to the face, just below his right eye, while participating in infield practice on Tuesday evening at Globe Life Field, but he got treatment and then popped back out of the clubhouse for a full round of batting practice. The 30-year-old slugger will start at first base and hit cleanup in World Series Game 1 versus the Rays and right-hander Tyler Glasnow.
Added 6:12 pm (EST)
Added 6:12 pm (EST)

M. Muncy - 1B
LA1
Max Muncy was struck in the face by a ground ball while participating in infield practice before Game 1 of the World Series on Tuesday.
Jon Morosi of MLB Network notes that Muncy "walked calmly to the clubhouse for treatment" by the Dodgers' medical staff and returned to the field around 12 minutes later to take live batting practice. It sounds like he avoided a serious injury. Muncy is currently slated to start at first base and beat cleanup for the Dodgers in World Series Game 1 on Tuesday night against the Rays and right-hander Tyler Glasnow.
Added 5:19 pm (EST)
Added 5:19 pm (EST)

K. Kiermaier - CF
TB
Kevin Kiermaier (wrist) is in the Rays' starting lineup for Game 1 of the World Series against the Dodgers on Tuesday.
He will start in center field and hit eighth versus Clayton Kershaw. Kiermaier was limited to a bench role in Games 4-6 of the ALCS after taking a pitch off his left wrist in Game 3, but he played all nine innings of Saturday's Game 7 victory and it sounds like he should be at or near full strength leading into the Fall Classic.
Added 4:45 pm (EST)
Added 4:45 pm (EST)

Y. Díaz - 3B
TB1
Yandy Diaz is starting at first base and batting leadoff for the Rays in Game 1 of the World Series on Tuesday versus the Dodgers.
It'll be his first turn at leadoff since Game 4 of the American League Division Series against the Yankees. The full World Series Game 1 lineup for Tampa Bay: Yandy Diaz 1B, Brandon Lowe 2B, Randy Arozarena DH, Hunter Renfroe RF, Manuel Margot LF, Joey Wendle 3B, Willy Adames SS, Kevin Kiermaier CF, Mike Zunino C. Tyler Glasnow is on the mound, facing off against Dodgers left-hander Clayton Kershaw.
Added 4:39 pm (EST)
Added 4:39 pm (EST)

J. Urías - SP
LA1
Dodgers manager Dave Roberts said Julio Urias is available out of the bullpen for Game 1 of the World Series against the Rays on Tuesday.
Urias threw the final three innings to close out Game 7 of the NLCS against the Braves on Sunday, but Roberts hasn't ruled out using him if needed. Ideally, that won't be necessary. The Dodgers haven't settled on a Game 2 starter just yet and Urias is in that mix too, potentially.
Added 3:35 pm (EST)
Added 3:35 pm (EST)

L. Campusano - C
SD
Padres prospect catcher Luis Campusano was arrested Saturday in Georgia and charged with felony marijuana possession.
Campusano was allegedly found with 79 grams of marijuana in his car when he was pulled over early Saturday morning in Grovetown, Georgia, near his hometown of Augusta. He was released on $5,000 bond. According to Georgia law, possession of more than one ounce (28.35 grams) of marijuana is a felony and punishable up to 10 years in prison. The Padres acknowledged the arrest on Tuesday, but are offering no further comment at this time. One of the organization's top position prospects, the 22-year-old Campusano homered in his first MLB game (he only appeared in one regular season game) before being included on the Padres' playoff roster.
Added 2:44 pm (EST)
Added 2:44 pm (EST)

S. Sánchez - SP
MIA
Marlins manager Don Mattingly doesn't consider Sixto Sanchez a lock for the team's rotation going into 2021.
Sandy Alcantara, Pablo Lopez, and Elieser Hernandez are the locks in the rotation, according to Mattingly. However, he believes Sanchez and Trevor Rogers will have to earn it. “We know what Sixto showed he’s capable of,” said Mattingly. “We’ve also seen some downsides to that and areas he needs to grow. So that will be more discussions. Trevor Rogers is in that same boat. You see upside, but you also see things that, would it help him to continue to develop?” Sanchez posted a 3.46 ERA over his first seven starts in the majors before making two starts (one good, one not so good) during the postseason. We wouldn't look too much into Mattingly's words just yet, as he surely wants Sanchez and Rogers to come to camp with something to prove. Barring injury, Sanchez is going to make a major impact with the Marlins and fantasy leagues next year.
Added 2:06 pm (EST)
Added 2:06 pm (EST)