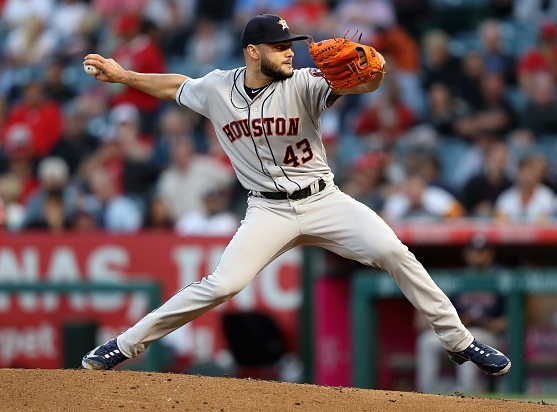 As we head into the homestretch of the fantasy baseball season injuries continue to provide an obstacle that we all have to deal with as we try to put the icing on the cake on a championship season.

There are several fantasy relevant players on this week’s injury report and yes as has been the norm, there are a couple of Yankees players included in this article (surprise, surprise!). Let’s take a closer look at some of the injuries that we fantasy players will have to work around as we head into the upcoming week of the 2020 MLB season.

The Astros placed McCullers on the 10 day IL due to neck nerve irritation. In a corresponding move, the Astros recalled Cionel Pérez who has a minor league career 3.65 ERA and 40 minor league starts to his credit. He’s pitched in relief for the Astros this season and has had problems with his control. McCullers is coming off of Tommy John surgery which cost him all of last season. His velocity has been down a bit this season in comparison to his career numbers, and he’s pitching to an ugly 5.79 ERA. He faced five hitters and gave up three runs, two hits and three walks and didn’t record an out in his last start on Friday night. He also complained about not being able to feel the ball. The Astros pitching staff is obviously in trouble. Jose Urquidy made his season debut on Saturday and pitched just 3.2 innings and the Astros are still hoping that Justin Verlander (forearm strain) can return to the mound before the end of the season. Zack Greinke will be the most experienced arm in the Astros rotation for now as Cristian Javier, Framber Valdez and the inconsistent Brandon Bielak will likely continue to work out of the Astros starting rotation until McCullers or Verlander are ready to return.

Keuchel was forced out of his Sunday start against the Royals due to experiencing lower back stiffness as he was warming up for the sixth inning. Watch his progress before deciding on whether to start him in your weekly lineup.

Kim was placed on the IL due to a kidney ailment which forced him to be hospitalized. Andrew Miller was reinstated off of the IL in a corresponding move. Kim was rushed to the hospital on Friday night due to abdominal soreness and was released on Saturday. Dakota Hudson started the Cardinals game against the Cubs in Kim’s place. Kim has pitched to an outstanding 0.83 ERA this season. According to the St. Louis Post Dispatch Carlos Martínez may need to start a game or two for the Cardinals due to multiple upcoming doubleheaders.

Hernández’s breakout season is over as the Marlins have placed him on the 60 day IL due to a strained right lat. Jordan Yamamoto , Dan Castano, as well as Nick Neidert (currently on the IL) can provide depth in the Marlins starting rotation if need be. Marlins insider Craig Mish tweeted that José Ureña would get the start for the Marlins on Monday (today). Hernández’s loss is a big blow to the Marlins rotation. He posted a 3.16 ERA with 11.9 K/9 this season.

Effective spot starter and reliever Jonathan Loaisiga was placed on the IL this week. Yankees manager Aaron Boone stated that his injury is not COVID-19 related, but is “a medical condition that prevents him from playing and necessitates placement on the injured list”. Miguel Ajure was called up by the Yankees in a corresponding roster move.

Avila was placed on the IL due to lower back tightness. He is expected to miss the minimum 10 days. Avila is batting just .167 but with Mitch Garver on the IL since August 20th due to a right intercostal strain, the Twins are a bit shorthanded at the catcher position. Ryan Jeffers and Willians Astudillo will share the catching duties for the short term.

Altuve was placed on the IL due to a right knee sprain. He is eligible to come off of the IL on September 14th. Altuve has been struggling for most of the season, batting just .224 but he’s been hot of late. He’s batting .333 in his last 13 games. Aledmys Díaz and Jack Mayfield have been filling in at second base during Altuve’s absence.

Torres was reinstated from the IL and returned to the Yankees lineup against the Orioles on Saturday. He was then rested on Sunday. Yankees manager Aaron Boone said that in regards to managing Torres’ playing time, “we’ll be smart about it”. Torres is expected to start all three games of the Yankees upcoming series against the Blue Jays. Torres injury situation is a bit odd. He had been on the IL due to grade 1 strains in his hamstring and quadriceps and GM Brian Cashman suggested that it would take a while for him to recover from his injuries in an August 28th New York post article. Perhaps the Yankees felt the need to rush him back due to their slumping offense?

You may want to think twice before putting Semien in your starting lineup again this week. He is still experiencing some discomfort in his left side, but is expected to take BP today (Monday). If all goes well he could return to the A’s lineup sometime this week. If you have a less risky option that you can start at the shortstop position, you may want to bench Semien this week.

In last week’s article we reported that Fletcher sprained his ankle while running down the first base line during last Sunday’s game. The sprain was considered relatively minor, but the Angels did place him on the IL retroactive to August 31st.  The void in the Angels infield allowed the newly acquired Franklin Barreto to receive regular ABs. Unfortunately he’s batting just .118 for the Angels and he injured his shoulder in Sunday’s game against the Astros. He is being further evaluated as this article is being written.

Chapman was removed from Sunday’s game against the Padres due to a hip strain. He is scheduled to undergo an MRI in order to determine the severity of the injury. According to A’s manager Bob Melvin, the hip injury is something that Chapman has been dealing with on and off all season. Chad Pinder came in to replace Chapman. As this article is being written Chapman hasn’t been placed on the IL as of yet, however it’s safe to say that you probably shouldn’t include him in your season long weekly lineup this week.

Bregman could be coming off the IL as soon as today (Monday) according to Astros manager Dusty Baker. Bregman has been on the IL due to a strained hamstring. Follow his progress closely before setting your weekly lineups. Baker said he was “hoping” that he was ready and added that “he’s a guy that we definitely have to take time with if there’s any doubt”.

Diaz hit the IL due to a strained right hamstring. There is no exact timetable for his return as of yet. Nate Lowe was activated off of the Rays’ taxi squad in a corresponding move. He’ll share time at the hot corner with Joey Wendle , Mike Brosseau while Diaz recovers. Yoshi Tsutsugo might even get a spot start at third base as well. Diaz had been hitting .363 over his last 24 games.

The Yankees placed Urshela on the IL this past Friday due to a bone spur in his right elbow. He aggravated the injury on a diving play in Thursday night’s game and was administered a cortisone shot. Yankees manager doesn’t expect Urshela to be on the IL for too long, but also didn’t rule out the fact that he might need offseason surgery to fully address the injury. The Yankees recalled Miguel Andújar in a corresponding move. He, along with Thairo Estrada and D.J. LeMahieu all got starts at the hot corner this past weekend. The Yanks have been decimated by injuries this season with Aaron Judge , Giancarlo Stanton and James Paxton still on the IL.

Hernandez sat out Sunday’s game against the Red Sox due to his experiencing stiffness in his left ribcage. An initial MRI was inconclusive due to swelling in the affected area. He sustained the injury striking out in Saturday’s game. He is likely to need another MRI to determine the severity of the injury.  Rob Longley of the Toronto Sun suggested that Hernandez could miss “serious” time. Hernandez has played most of his games in right field this season. Derek Fisher , the former power hitting Astros prospect started in right field on Sunday. He’s been seeing some semi-regular playing time of late. Hernandez is having a tremendous season, smacking 14 home runs and driving in 27 runs thus far.

Kepler was placed on the 10 day IL due to a left adductor strain. Kepler has never been on the IL in his MLB career. The Twins expect he’ll be on the IL only for the minimum 10 days. In a corresponding move the Twins promoted outfield prospect Brent Rooker . He has a power bat, but his defensive skills are said to be limited.

Check on Soler’s progress before putting him in your weekly lineups. He was removed from Saturday’s game against the White Sox due to oblique soreness. It was the second time in the past week that he’s had to exit a game early due to the injury. As this article is being written he hasn’t been placed on the IL as of yet. If he does need to miss time, perhaps Ryan McBroom (.507 slugging percentage this season) may see regular ABs moving forward.

Santander, arguably one of the Orioles’ best hitter this season, was placed on the IL due to a strained oblique and is expected to miss the rest of the season. He finished the season with a .261 batting average, 11 home runs and 32 RBI. D.J. Stewart is expected to replace Santander and get the majority of playing time in right field. He had been hitless in his last 16 ABs but got four hits in seven ABs in his last two games against the Yankees this weekend. Three of those hits went for home runs. Go figure!

Be wary about putting the hot hitting Munoz in your weekly lineup. He was lifted from Sunday’s game against the Blue Jays due to an apparent right hamstring injury. Follow his progress closely before deciding on whether or not to start him this week.

If you play in a deeper league and Heyward is usually one of your starting outfielders you probably should keep him on your bench this week. Heyward was removed from Sunday’s game against the Cardinals after feeling light-headed and complaining of having trouble breathing. He was sent to the hospital for further evaluation. Heyward is enjoying somewhat of a comeback season, posting a .300/.415/.540 triple-slash thus far.

Santana will be out for the remainder of the season due to a sprained right elbow. Unfortunately Santana had been struggling all season, posting a .145/.238/.273 for the season.