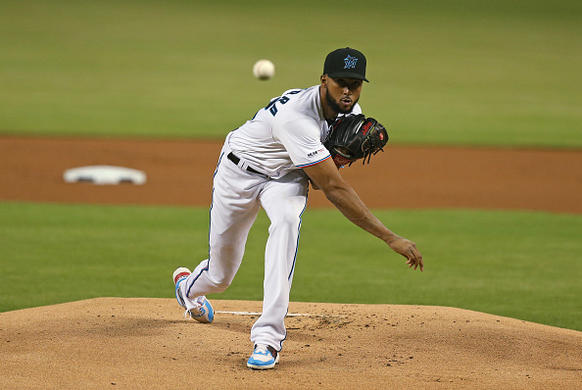 As we look ahead to the second half and the rest of the fantasy baseball season let’s first take a look back at this season’s overall first half stats. Let’s compare them to last season’s overall stats in order to determine, or better yet confirm, that big league pitchers have been having a hard time of it of late.

As the average fantasy baseball player who carefully follows individual baseball stats on a daily basis probably expects, the statistics do confirm that hitters continue to have the upper hand over opposing pitchers.

As you can see from the chart above, hitting statistics continue to climb and hitters are raking. Most notably, we see a significant increase in slugging percentage and HR/FB percentage. In the chart below we see that on average more runs are being scored, home runs are being hit at a higher rate, and batters are more aggressive, or shall we say, less disciplined, as compared to last season.

Another interesting trend to note is that pitchers are moving away from relying on their fastballs. However, while they’re throwing fewer fastballs, pitchers are throwing harder and the velocity of those fastballs has been on the rise.

In 2009, 59.7 percent of overall pitches thrown were fastballs and the average velocity on those fastballs was 92.2 mph.

Last season, 55% of all pitches thrown were fastballs and the average velocity of those fastballs was 93.6 mph.

This season, just 52.6% of overall pitches thrown have been fastballs and the average velocity of those pitches has been 93.7.

Today’s batters love extending those arms and golfing that ball out of the park for home runs. In order to make hitters uncomfortable and to fight back against the recent onslaught of home runs, pitchers have had to resort to jamming opposing hitters by pitching high and tight. That’s resulted in a steady increase of batters being hit by pitches (and a bunch of highlights of benches-clearing on the MLB Network). In 2009 batters were hit by pitches at a rate of .33 per game. By 2018 that rate had risen to .40 per game. This season the hit by pitch rate per game is at .41.

So what do you do when it comes to restructuring your current fantasy baseball pitching staff and combating the long ball? Well, you can look for pitchers who don’t give up home runs.

Heading into Thursday night’s action Marlins SP Sandy Alcantara had the lowest HR/FB rate in baseball at 7.2. He hasn’t given up a home run in his last seven starts, and during that time-frame, he’s 3-2 with a 1.97 ERA. However, if you play in a league that tracks Quality Starts, he supplied you with five. 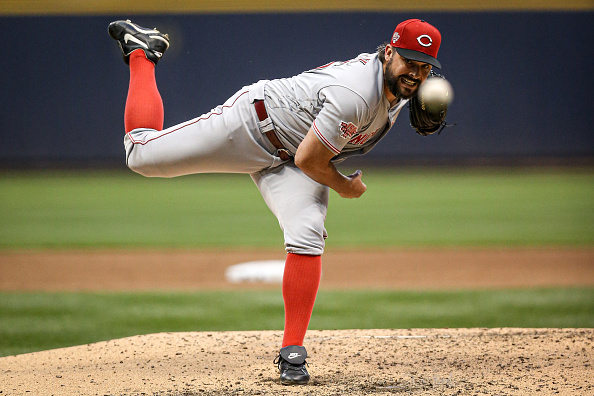 Reds SP Tanner Roark has the fifth lowest HR/FB rate in baseball (8.1). Over his last 10 starts, he’s given up five home runs and pitched to a 3.00 ERA. You’d like to see him do better than winning four of nine decisions during that span but the Reds as a franchise are in full rebuild mode.

Rangers SP Lance Lynn is quietly enjoying a nice season. He has an overall 9-4 record, but his ERA is a disappointing 4.32. He has the ninth lowest HR/FB rate in baseball (8.8). In his last 11 starts, he’s won seven of nine decisions and pitched to a 3.48 ERA. Lynn gave up six home runs in his first eight starts, and just three in his next eight starts.

The last few pitchers we’ve discussed all had low HR/FB rates. However, pitchers who induce a high number of ground balls can also help your fantasy team avoid being clobbered by the long ball as well.

Cardinals SP Dakota Hudson has a rather high 20.4 HR/FB rate, but he leads the majors with a 61.7 ground ball rate. When he gives up fly balls a relatively high percentage of them leave the yard. He solves that problem by not yielding a lot of fly balls. On average, 35.7% of pitchers batted balls are fly balls. Hudson’s fly ball rate is just 17.9%. He hasn’t given up more than three runs in his last 12 starts. Hudson has pitched to a 2.86 ERA and given up just five home runs during that time frame. 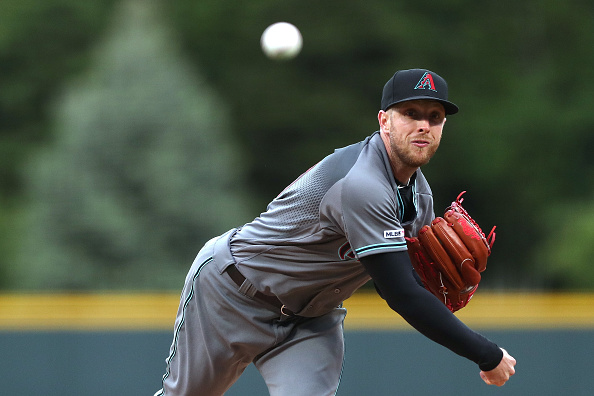 In Diamondbacks starting pitcher Merrill Kelly ’s first eight starts he had a HR/9 rate of 1.57 and an ERA of 4.70. In his next eight starts, he lowered his HR/9 rate to .94 and that resulted in his posting a 3.19 ERA during that time span.

Limiting home runs will likely help a pitcher’s overall stats, but there are some exceptions. Justin Verlander is having another Cy Young Award-type season and yet he has a mediocre 16.9 HR/FB rate (his K/9 rate is at 11.15 and his strand rate is at an unsustainably high 90.8). Despite outliers like Verlander, rostering as many pitchers who avoid giving up home runs will likely make you a happier fantasy baseball player.

We’ll dive into what we expect to be upcoming trends that you should be aware of as you continue to battle for your league’s championship in upcoming columns but until then, here’s a couple of quick hits.

The Orioles are a bad team who have nothing to lose and their third base prospect Ryan Mountcastle , has some issues with his defense and is almost too aggressive at the plate, but he’s currently tearing the cover off of the ball in Triple-A. Keep him on your watch list.

For those of you waiting for the Blue Jays to call up shortstop, Bo Bichette just think about how long it took for Vlad Guerrero Jr. to make it to the bigs. You never know, but we probably won’t see Bichette in a big league uniform until MLB’s Super Two for the 2020 season has passed.

S. Strasburg - SP
WSH1
Stephen Strasburg was forced to leave Friday's start against the Orioles in the first inning due to an apparent injury.
Strasburg made it just three batters into the game before departing. The right-hander spent time on the injured list earlier in the year with a nerve issue in his pitching hand, which he admitted bothered him again in his return on Sunday. It looks like he experienced the same issue in this one. Look for the Nationals to provide an update on his status after the game, but it wouldn't be surprising to see him heading back to the injured list.
Added 9:09 pm (EST)
Added 9:09 pm (EST)

Y. Kikuchi - SP
SEA
Yusei Kikuchi was scratched from his scheduled start against the Astros on Friday due to neck spasms.
Nestor Cortes will start in his place. It's unclear at the moment how long Kikuchi will be sidelined or when he'll be able to make his next start. The right-hander has fared well in many advanced metrics this season, but has only a 5.28 ERA and 1.30 WHIP to show for it through his first three starts.
Added 8:59 pm (EST)
Added 8:59 pm (EST)

S. Howard - SP
PHI1
Spencer Howard was forced to leave Friday's start against the Mets due to a possible blister.
The rookie right-hander may not have been much longer for the game anyways, having surrendered four runs (three earned) on seven hits and a pair of walks over 3 1/3 innings of work. Howard punched out two on the night. Before departing in the third inning, he allowed solo homers to Dominic Smith and Robinson Cano. Through two starts he owns a miserable 7.88 ERA and 2.13 WHIP. It's unclear if he'll get another chance in the Phillies' rotation, or if Vince Velasquez will get the call the next time this spot comes around.
Added 8:20 pm (EST)
Added 8:20 pm (EST)

A. Slater - RF
SF1
Austin Slater (flexor strain) was able to hit soft toss on Friday and could be able to function as the Giants' designated hitter in the next couple of days.
Manager Gabe Kapler indicated Friday that Slater wasn't a candidate for the injured list -- at least for now. The 27-year-old is off to a terrific start for the Giants this season, slashing .342/.444/.632 with three homers, four RBI and five stolen bases in only 38 at-bats.
Added 7:01 pm (EST)
Added 7:01 pm (EST)

S. Castro - 2B
WSH1
Nationals placed INF Starlin Castro on the 10-day injured list with a broken right wrist.
Starlin Castro suffered a broken right wrist on Friday during the resumption of Sunday's suspended game against the Orioles. Castro suffered the injury while diving for a ball at second base and X-rays quickly revealed the unfortunate fate. The Nationals recalled 20-year-old Luis Garcia in a corresponding move. Carter Kieboom and Asdrubal Cabrera are also likely to see an uptick in playing time in Castro's absence.
Added 6:55 pm (EST)
Added 6:55 pm (EST)

S. Castro - 2B
WSH1
Nationals recalled INF Luis Garcia from their taxi squad.
The 20-year-old prospect will jump right into the action, making his big league debut and starting at second base on Friday against the Orioles. The move was made necessary when Starlin Castro injured his wrist during the resumption of Sunday's suspended contest. Garcia slashed .257/.280/.337 with four homers, 30 RBI and 11 stolen bases in 129 games at Double-A Harrisburg in 2019 -- but was significantly better over the second half of the season.
Added 6:37 pm (EST)
Added 6:37 pm (EST)

S. Castro - 2B
WSH1
Starlin Castro was removed from the resumption of Sunday's game against the Orioles after injuring his wrist.
Nationals' manager Dave Martinez said Castro hurt his wrist in a diving play at second base. He's set to undergo X-rays to see if there's any structural damage. It would be surprising to see him in the lineup for Friday's game, and fantasy players may want to bench him for the weekend if they have any viable alternatives.
Added 6:30 pm (EST)
Added 6:30 pm (EST)

P. Wisdom - 3B
SEA
Mariners released INF Patrick Wisdom.
The Mariners designated Wisdom for assignment earlier in the week when claiming Brady Lail off of waivers, but now he's been given his unconditional release. The 28-year-old is a career .224/.306/.408 hitter with four homers and 11 RBI in 86 plate appearances at the big league level.
Added 6:27 pm (EST)
Added 6:27 pm (EST)