Howard Bender pores over the data and match-ups to bring you his favorite plays for Week 6 NFL DFS main slate contests. 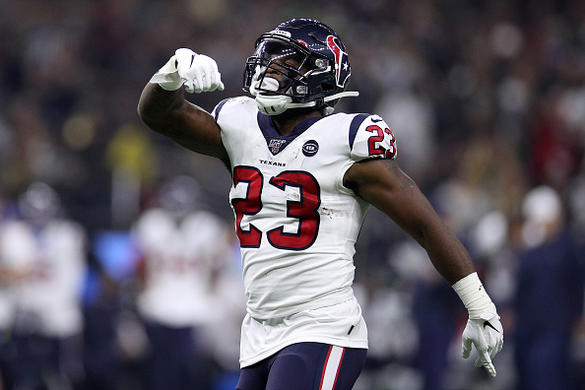 Welcome to the DFS Playbook for NFL Week 6!

Everyone had quite the week last week with pay-lines being crazy high due to so many players like Deshaun Watson , Christian McCaffrey , Will Fuller and Michael Thomas going off. I had three of the four in the Playbook and if you read Colby Conway's WR Coach or listened to Jen Piacenti during the Sunday livestream, you had ridiculously strong endorsements for Fuller. The hurtful one, at least for many of my lineups, was Julio Jones , who failed to pop off like the rest of these and fitting him into your lineup prevented you from getting a few of these guys in there. It happens. Nothing you can do. The process was right, the research was there and everyone but Julio caught a touchdown it seemed during the Falcons loss to the Texans. We press on, though. We mark the data from Week 5 and move onto Week 6 with everything that has brought us success this season and the seasons before. We don't let a tough week stand in our way. And frankly, it wasn't even that tough. If you used the Playbook and didn't get caught up in using Julio, you smashed. I mean really smashed. Especially if you also caught the NFL Poddcast and RB Coach and jammed Aaron Jones into your lineups!

In any event, let's look to Week 6 which is definitely an interesting one as we only have 10 games from which to choose. Three of those games have an implied total of 50 or more, so you can imagine how the public will set themselves up. The heaviest ownership will likely be on Kansas City vs Houston, followed up by Atlanta vs Arizona where everyone who thinks they're being sharp will be heavy. And then there's the Rams vs 49ers, the third game which still has me scratching my head as to how they're going to score so much given the fact that the Niners have no receivers, are down two men on the offensive line and their best pass-catcher, George Kittle , is dealing with a groin issue. Meanwhile, the Rams may be getting back Brandin Cooks , but they're going to be without Todd Gurley who is listed as doubtful. That's actually going to help us find value at the running back position, but still, this is an interesting clash between division rivals.

As always, I encourage you to read everything that has come out throughout the week. I couldn't be more enamored with this team at Fantasy Alarm and trust the opinions of each and every person who contributes. Leave no stone unturned. Read it all, absorb it and then let's get to the Playbook this week. I've got a few more extra plays than normal, which may seem odd given the shorter than usual slate, but there are some who have a more distinct line between cash and GPP use, so take notice and be sure to read the breakdowns thoroughly.