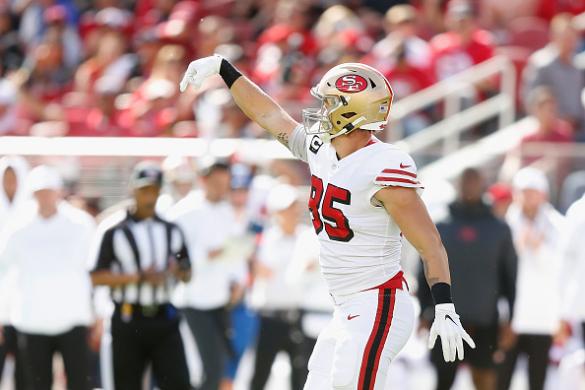 Another week has flown by and we’re just two weeks away from the NFL opener. With all that’s going on in 2020, who knows if it’ll kick-off on time but we can all use some normalcy in our lives. The Mock Draft Army continued this week and as always, I attempt to try a different approach and see if it’s something you can use in your upcoming drafts.

This week I had the opportunity to take 2 tight ends in the first five rounds. Zach Ertz was sitting there for me at pick 5.06 after I had taken George Kittle in the second round. It’s something you don’t see outside of TE premium leagues such as the FFPC, but I gave it a try.

I had started the draft with Kamara and A. Jones and was surprised Kittle was still there in the 3rd round.  I followed them up with Adam Thielen in the 4th round. When it got to me in the 5th, I was not enamored with the RB choices left for me. There were some good wide receivers left, but I decided to see what would happen by taking Ertz here. Would taking Ertz as my flex be better than any WR4 or RB3 I could have gotten? Would the wide receivers available when I took Ertz have been the better option?

If you take Howard Bender’s rankings and projections, assuming 1pt PPR, 6 pts/TD, and 0.1 pts/yd, the average WR4 would score 173 points. Ertz projects to 208.3 points. Seems like a winner to me. Unfortunately, the six WRs taken between my Ertz pick and my next pick all are projected to score more than Ertz. It ranges from a high of 261 points by Keenan Allen to a low of 212 points by Marquise Brown , with DJ Chark, DeVante Parker , Tyler Lockett , and Terry McLaurin all in between.  Of course, you have to assume that the draft would have gone the same way if I passed on Ertz and took one of them. If that happened, I would have gained anywhere from 3.7 to 52.7 points by taking a WR instead of Ertz.

In the end I did project to finish second behind Dan Malin but by only 4.7 points.  You can look at it as a strategy that worked based upon the projected finish, but also one that cost me points which could come into play in the playoffs or on a week to week basis during the regular season.

The reason we do the Mock Draft Army is to learn and prepare for your drafts. Let’s take a look at who was projected last in our three 12 team drafts this week and attempt to see why that happened and if they had anything in common. This isn’t to pick on anyone and remember that they may have been trying out a strategy to see if it worked, but it’s useful to analyze this.

On Tuesday we had Carolina Cooters projected last. They picked 7th and started with Miles Sanders. We haven’t seen Sanders go that early in the MDA and he was taken ahead of several players that Howard has ranked higher. He then went WR with his next two picks taking Julio Jones and Allen Robinson . No arguments with those two but it left him taking Jonathan Taylor and D’Andre Swift as his next two RBs. I honestly don’t have any issues with the rest of his picks. It appears the slight reach for Sanders and the lack of surefire depth (it could turn out great) is what the projections didn’t like in this draft.

On Wednesday it was Pumpher picking 2nd who ended up on the bottom. We once again see a RB/WR/WR start to his draft.  Barkley followed by Godwin and Kupp. Again a good start but he’s left with RB26 at the end of the 4th round and took D’Andre Swift. As we have said over and over, it seems that you will have a tough time if you don’t take 2 running backs in the first 3 rounds. HIs other running backs ended up being Latavius Murray , Ke’Shawn Vaughn, Bryce Love and Gio Bernard. Keep your fingers crossed with that group.

Bucking a trend you’ll see below, JetBlack took Nick Chubb at number 9. Despite this, the evaluator had him coming in last in Thursday’s mock. Unlike the previous two nights where the teams who came in last took a WR in rounds two and three, JetBlack did take a RB in the third round. After taking Julio Jones in the second, he went with Cam Akers in the third. Taking Akers over Mostert, Gordon, Bell and Jones may have contributed to the last place finish. He had a solid WR corps after adding Robert Woods and Terry McLaurin .  Lastly, his unconventional back to back picks of two defenses in rounds 9 and 10 was probably the nail in the coffin.

So we saw that two of the three last place finishers didn’t take a second running back until the 4th round and the third took some chances on two rookies as RB2 and RB3. The Fantasy Alarm evaluator shows what our experts preach. Take good RBs early and often. Of course these are  projections and in season management plays a huge role in how your team finishes.

Who is moving up and down draft boards this week? Remember to check the dates on the ADP data you are following. Data from the beginning of draft season can be misleading and cause you to take someone too early or miss out on them. All ADP averages are taken from the NFFC comparing the period of 5/1/20 to 8/19/20 and 8/20/20 to 8/27/20.

The Eagles were criticized by their fans when then passed on Justin Jefferson and took Jalen Reagor in the first round of the 2020 draft.  Reagor has been impressive in camp and is looking to be a major target of Carson Wentz .  The Eagles played the last few games of the season in 2019 with receivers that weren’t on NFL rosters for most of the year. Reagor is a major upgrade and with the glowing reports out of camp, his ADP is rising. Over the last week, his ADP is 114.32 rising from 133.56.  Now a 10th round pick you have to get out your pocketbook a little earlier to fly with this Eagle.

Every year when his name pops up and it’s your turn to draft you ask yourself, “Will this be the year he stays healthy?” Will Fuller is the perennial injury poster child. His ADP has risen from 82.47 to 71.17 with the hope of a healthy season. What’s the reason for the optimism? It can only be hope as there hasn’t been any major news out of Texans camp. The loss of D’Andre Hopkins has added to Fuller’s lustre, but Brandin Cooks may have something to say about that.  Fuller is an explosive player but remember that almost half of his points in 2019 came in one game. Even when he was “healthy”, he didn’t have a touchdown in any other game. Take him in the late 6th round at your own risk.

The Falcons let Austin Hooper go and acquired Hayden Hurst to replace him. Hurst has the potential to be a top 5 TE this year but he may be limited due to the duo of Julio Jones and Calvin Ridley . Fantasy footballers have raised the stakes over the last week taking Hurst in the 8th round at 87.11 moving him up from an ADP of 105.6.  That’s a big jump but the expectation is for Hurst to have a big year in Atlanta. He is being taken as the 6th TE overall with an ADP similar to Evan Engram and his injury history and Tyler Higbee and the questions surrounding his breakout 2019.  This is the Bermuda triangle of taking a TE.  Fly through unscathed to the tropics or crash and burn.

This may be a trend we see every year, but while looking at last week’s ADP I noticed that all of the top 10 QBs had fallen. Do drafters “fall in love” with the position early in draft season? Do they realize that taking a QB early in a one QB league can be detrimental to roster construction? Have they seen that they can get someone like Matthew Stafford , who could be a top 5 QB if healthy, at the end of the 10th round?  Waiting on a QB in a one QB league is the mantra of many “experts”.  You can have a successful draft taking Mahomes or Jackson early but you must take two running backs in the first 2-3 rounds to pull it off as the depth at WR allows you to do so.  Here are some of the drops in ADP for the top ten:  Mahomes 17.03 to 20.94, Jackson 16.64 to 21.06, Murray 56.03 to 66.92, Allen 86.58 to 95.71 and Wentz 88.66 to 97.37.  Everyone has their targets and sweet spots for taking a QB but this may help you know you can wait a little longer to get your guy.

It’s not a huge drop but it’s still puzzling. Nick Chubb has had his ADP from 15 to 17.86 in the last week. I saw that someone in a high stakes NFFC league had both Alvin Kamara and Nick Chubb and I couldn’t understand how they got both.  Chubb’s declining ADP is the answer as he took Chubb 21st overall. The love affair with Kareem Hunt is the most likely cause of Chubb's fall. Chubb is one of the most talented running backs in the NFL and could potentially lead the league in rushing. It’s up to the Browns to use him enough and not succumb to the lure of Hunt’s 3rd down productivity.  If you can get Chubb that late in the second round, you are getting round one talent at a bargain.

If you saw the video of David Montgomery injuring his groin, you’ll know why his ADP will fall in the upcoming two weeks. It’s an injury that can heal in 4-6 weeks but one that is also likely to linger if he comes back too early.  With the expectation of him missing at least 4 games and possibly more, his stock is going to fall. His ADP has slipped from 49.28 to 52.02 over the last week but this doesn’t reflect the full impact of his injury yet. I expect him to fall behind players like Raheem Mostert , Cam Akers, Mark Ingram , and Ronald Jones all of whom were being drafted after him. If you can get him as your RB4 or later, he can possibly help you later in the season.

Thanks to all who have participated in the Army so far this season. We wrap up the mock season next week. Look for the schedule on Saturday at www.rtsports.com/mock-draft-army-football Be safe everyone and I’m always available for questions on Twitter @gasdoc_spit

Check out the Fantasy Alarm NFL Draft Guide Article "The Importance of Mock Drafting" to read more from Andy and get his strategies and analysis on why participating in mock drafts is a must when it comes to your pre-draft strategy!

Are you an FA Pro member yet? If not, now is the BEST time to join as we are offering 20% off ALL Pro Packages when you use code DOMINATE at checkout! Go to www.fantasyalarm.com/packages to take advantage of this LIMITED TIME OFFER!