Adam Ronis gives you a look at some deep sleepers at the shortstop position that are worth taking in the later rounds of your fantasy baseball draft. 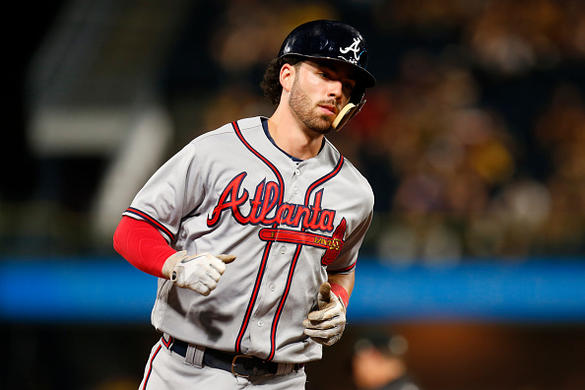 The shortstop positional series continues and although the position is very deep, there are still some undervalued and deep sleepers that can be had late in drafts. These are players that are going to be used at the middle infield position or bench depth for when injuries hit. Many of these players could return a big profit and become fixtures in the starting lineup.

The aspect that gets lost from last season with Swanson is the heel injury. He was on his way to a breakout season and would have been looked at way different if he didn't miss time. He had a heel injury in late July and missed about a month. When he returned, he wasn't the same and it affected his final stats. When he returned, he didn't hit a homer and struck out 32 percent of the time. In the 100 games before injury, Swanson was batting .265 with 64 runs, 17 home runs, 57 RBIs and seven stolen bases.

He is 26 years old and improving. While he's unlikely to hit in the top four of the Braves lineup, he could potentially hit fifth if he starts the season strong. He's got a good chance for 20-10 or even 20-15 with solid counting stats and he's cheap in drafts.

If you are light on steals late in the draft Goodrum is a solid pick. He won't help in average, but he has stolen 12 bases in each of the last two seasons. Getting a few players that can get 10-15 stolen bases should you miss out on the top stolen base guys can help stay competitive in the category.

He's also eligible at several positions depending on the requirements of the league. In many leagues, he has eligibility at first base, second base, shortstop and outfield.

Goodrum is slated to play every day at shortstop and the Tigers can move him around if needed. In only 112 games last season, Goodrum had a slash line of .248/.322/.421 with 61 runs, 12 home runs, and 45 RBIs. There's a good chance Goodrum hits second in the order, in front of Miguel Cabrera , C.J. Cron and Jonathan Schoop .

Urias came over from the Padres in the Trent Grisham deal. In late January, Urias had surgery to repair a broken hamate bone and the delay to the season will put him in line to be ready for the start of the season. Urias has shown he can hit in the minors but has struggled in his brief time in the majors in 12 games in 2018 and 71 games last year. In 73 games at Triple-A last season, he had a slash line of .315/.398/.600 with 62 runs, 19 home runs, 50 RBIs and seven steals. With the Padres over 71 games, he had a line of .223/.329/.326 with 27 runs, four home runs and 24 RBIs and no steals. Urias has eligibility at second base and shortstop and moves to a good hitter’s park. He's someone to consider in the reserve rounds of 15-team leagues or more.

There is a question as to whether Kieboom will be the starter going into the season. He is likely to be the starting third baseman, but he qualifies at shortstop for fantasy. He had 43 plate appearances over 11 games in the majors last season and struggled with a 37.2 percent strikeout rate, but it's a small sample. He showed good plate discipline throughout his minor league career with a 20.2 percent strikeout rate and 13.8 percent walk rate at Triple-A with a .303/.409/.493 slash line. He has power and can add in some stolen bases. I took Kieboom in the reserve round of a 15-team NFBC auction.

There were some good signs and some concerns for Adames last season in his first full season in the majors. He had a slash line of .254/.317/.418 with 69 runs, 20 home runs, 52 RBIs and four stolen bases. It was only a couple of seasons ago he was considered a Top 10 prospect. Adames lowered his strikeout rate, increased his ISO, hard-hit rate and barrel rate. The walk rate, average and on-base percentage decreased. Adames increased his line drive rate from 17.5 percent in 2018 to 23 percent last year. Adames was very extreme last season. He was bad early and excellent in the final two months. In 227 at-bats in the second half, Adames had a line of .278/.340/.467 with 34 runs, 10 home runs, 26 RBIs and one stolen base. Adames is in a good Rays lineup and could be one of the few on the team that isn't in a platoon.