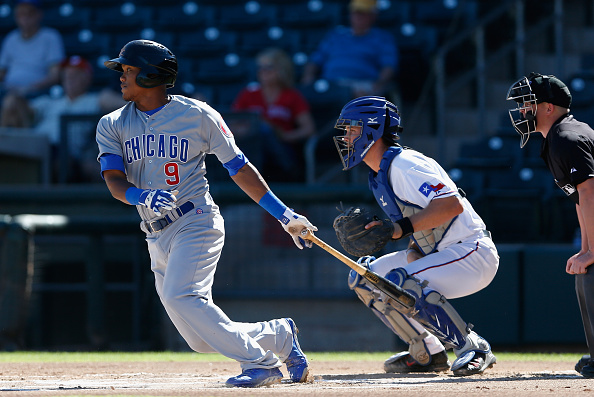 Every year, on February 14th, husbands, wives, boyfriends and girlfriends alike are united under the banner of romantic love. Ah, Valentine’s Day. What started out as a Christian feast has morphed into a holiday wherein we lavish our loved ones with candy, flowers, warm embraces and utterances of appreciation. But, while you were snuggling up with your sweetie, embers alight on the fire next to your bearskin rug, I was welled up in a late-night café ingesting caffeine enough to wake a grizzlybear from a mid-winter slumber. Yes, while you were laying a rose petal trail for your lover — set to the careless whispers of George Michael, I hope — I was with a cadre of young ethnically-diverse men who may ultimately bring you fantasy glory. If Valentine was a martyr for love, then here I sit in the wee hours of the morning — heart beating out of my chest — a martyr for baseball. And, this columm is my labor of love.

Last week, we looked at the Top-10 prospects for the 2015 season. This week, we’ll look at prospects #11-20. As we discussed before, opportunity is the trump card in this game of tealeaves. If the leaves don’t augur playing time, then they’re not going to be on this list, simple as that. In the first version, for example, Padres pitching prospect Matt Wisler was prominently featured. He’s got solid skills and anyone pitching in San Diego raises a fantasy manager's eyebrow. The Friars, however, decided to lavish their moneys on James Shields, potentially ticketing Wisler for a full season in Triple-A.

We’re starting to enter unknown territory here. Most of these players don’t need to be purchased on draft day — unless it’s an AL, NL-Only or 16-20 team mixed league. They all have impact potential, though, and anyone with fantasy chops knows the importance of having the scouting report on a kid before the internet ink is spilled on waiver columns everywhere.

Meet my valentines, ladies and gents:

Peraza has some of the best speed in all of baseball (“80” on scouts’ 20-80 scale). He puts the speed to good use, too. He’s praised for his baseball intelligence and has knack for figuring pitchers’ timing patterns to the plate. Peraza doesn’t walk much, but it’s not because he's a hacker. Rather, he can make contact with just about any pitch he swings at because of his excellent hand-eye coordination. Power is not an asset for the young second baseman, however. He’s hit just five home runs in 1500 minor league PA’s. And, while his allergy to walks isn’t a concern for his batting average, it could move him to a less prominent spot in the Braves’ lineup. If handed the keys to leadoff spot, he could produce an Elvis Andrus-like fantasy line: .270/.320/.350 with 30-40 stolen bases.

Meyer is a flame-thrower with shaky command. At times, he looks like a legitimate front-of-the rotation starter; other times, he looks like a guy who belongs in the bullpen. The rail-thin 6-foot-9 right-hander features a fastball that will regularly sit in the mid-to-high nineties with a knuckle curve that falls steeply off the table. He can match upside with anyone on this list, but he’ll need to beat out Kyle Gibson or Tommy Milone in order to get a chance to provide fantasy value — not so tall a task. At 25 years old, Meyer’s learning curve may not be as steep as others. It’s well within his ability to post an ERA in the mid 3.00’s with a strikeout per inning; although his tendency to walk batters could lead to a less than ideal WHIP.

Bradley was a hot draft pick in re-draft picks last spring, yet he didn’t log a single major league inning. After being unhittable in 2013 — he posted a 1.84 ERA over two levels, and struck out better than a batter per inning — his expectations were through the roof. Bradley’s control and velocity both receded in 2014, however, and a flexor strain is his elbow cost him much of the 2014 season. The D’backs sent him to the AFL this last fall to log some extra innings, and his vintage premium velocity made the trip with him. His delivery allows him to pitch to the bottom of the zone, and if he can learn to repeat his delivery and locate his fastball, he has the ceiling of a No. 1 starter. The organization is likely to play it safe with Bradley, but if he looks healthy and is throwing strikes, he will be in Phoenix in short order. He has the talent to pitch to an ERA in the mid-3.00’s with above average strikeouts from day one.

Norris had a huge 2014, ascending through three levels and punctuating his late-season promotion to Triple-A Buffalo with 38 strikeouts over his last 22.2 innings. While Norris’s ceiling likely isn’t higher than that of a No. 3 starter, he has a good chance to reach it in short order because he already owns three above average major league pitches. He’ll find himself in competition with system-mate and fellow rookie Aaron Sanchez for the final spot in the Blue Jays rotation, although it could be that Sanchez is moved to the pen in order to make room in the rotation for Norris. He probably won’t light the world on fire, but he’s a good bet to log innings and accumulate strikeouts.

Jonathan Gray is a favorite of mine because fantasy owners often dismiss him simply because he’s set to begin his career where pitchers typically go to die: Coors Field. Fortunately for Gray, he features the type of arsenal that could make him an undervalued fantasy commodity: big fastball, nasty slider. It’s widely known that the thin air in Denver has a massive effect on the ball, especially spinning ones. I won’t go deep into the physics here, but thinner air imposes less drag on moving objects. A curveball can have up to 25-percent less break in Colorado than the same pitch at sea-level. Not to mention, altitude gives fastballs about an extra MPH on average. There are two major concerns: after regularly getting into triple-digits in 2013, Gray topped out at 96 this past season. Also, his 2014 season was abbreviated thanks to shoulder fatigue. Should he regain his upper nineties fastball and show that he’s over the injury, he could find himself in the thin air of Denver and the equally thin Rockies rotation in early June.

There’s an argument that Russell is the most talented player on this list. The Cubs are loaded to the gills with premium talent and as of right now there’s no room for Addison Russell at the major league level. However, if Javier Baez continues to struggle with major league pitching — which seems likely considering Baez struck out an alarming 95 times in 229 plate appearances (41.5 percent) — Russell could be fast-tracked as the Cubs’ new second baseman. If he’s playing second base in Spring Training or gets moved there in April, he’ll need to be owned in all leagues. Given a full season of at-bats, he could establish himself as a top-10 option at the position, with upside to spare.

Finnegan made history in 2014 by pitching in both the College World Series and the… World Series World Series. He was electric out of the bullpen during the October classic, pumping mid-to-high nineties heat from the left side. Finnegan was a starter in college, but durability concerns (he missed time in college with shoulder stiffness) and his small frame may bespeak a long-term role in the bullpen. The Royals rotation as it’s currently composed looks like one of the worst in baseball. Thus, Finnegan could be given a shot to crack the Royals’ rotation during spring training. He features two plus pitches — fastball, slider — and a changeup that looks at least average. If he holds up, he could pitch to an ERA in the low-to-mid 3.00’s with enough strikeouts to matter.

Folty was a key piece of the trade that netted the Astros Evan Gattis. And he’s a wild card in more ways than one. He’s one of the hardest throwers on the planet— no exaggeration, the guy literally throws 100. His curveball has filth written all over it. Yet, Folty owns a career pedestrian 4.01 MiLB ERA with a strikeout rate of just 7.63 per nine. Scouts liken his wild delivery and pitches to Garrett Richards of a few years ago. Like Richards prior to 2014, Folty could be a few adjustments away from being an above average major league pitcher. Or he could not be. The good news is he has an inside track on the Braves’ fifth starter job heading into spring training. He could be worth a late-round flier in deep leagues with a strong March. It's tough to know what to expect from the big righty other than must-see baseball.

Johnson started to garner fantasy buzz a few years ago in 2013 when he led the minors with 84 stolen bases. He was plagued by hamstring issues for much for much of 2014, but played well in his 100+ games on the field. He's much more important fantasy prospect than real baseball prospect, with the talent to steal 35-45 bases. The good news is that Marcus Semien is now in Oakland and Gordan Beckham is a free agent, meaning Johnson's only competition for reps in Chicago is Carlos Sanchez, a Quad-A talent. He has the potential to produce the most empty 40-steal season in the majors this year.

The stuff is unquestionably electric. Before last spring, Rodon was seen as the unanimous first pick of the 2014 draft. However, Rodon showed some wear and tear in his college season and lacked the premium velocity he boasted during his incredible sophomore campaign at NC State. Long story short, Rodon took a short break from baseball this summer and the White Sox got him in a conditioning program that allowed him to get back to hitting 97 once he debuted in late July. Rodon has shaky command with his fastball, but a wipeout slider that gets all kinds of swings and misses. He could get the Chris Sale treatment to begin with, however, pitching out of the bullpen his rookie year, though there's an outside chance he finds himself in the rotation. Erik Johnson, John Danks and Hector Noesi aren't what you'd call stiff competition.