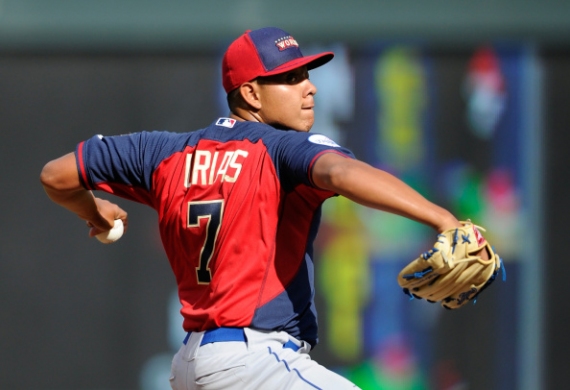 With April in the rearview mirror, it’s time to pan out and look at the macro-level happenings of the minor leagues.

The Graduates/Knocking On the Door

Somewhat surprisingly, the Cubs and Mets have been the most aggressive promoters in the early season. Those who have followed the minor leagues know that these two organizations have been stockpiling talent for a number of years. We know Kris Bryant. We know Addison Russell. About Russell — if you would have told me he would hit his first major league home run before Kris Bryant, I’d have called BS big time. Yet that’s exactly what’s happened. Russell has a home run, but is only hitting .206, with just one walk against 17 punch-outs so far. Remember, Russell played just 74 games above High-A before making his major league debut. There’s bound to be a learning curve, and early hiccups should be expected. It’s unclear, however, whether or not the Cubs are prepared to stick with Russell if he continues to struggle, especially with Arismendy Alcantara and, soon, Javy Baez at Triple-A Iowa — Baez hit his first home run of the season Sunday, after returning from the berevement list (his sister died, unfortunately).

The Mets' hand was forced by injury. They promoted Kevin Plawecki, a top offensive catching prospect, to replace Travis d’Arnaud, who fractured his hand after a very strong start. This week, they called up Dilson Herrera, who was slashing .370/.406/.502 at Triple-A Las Vegas. It’s unclear whether or not he’ll own a spot on the active roster once David Wright returns. Barely 21, Herrera profiles as a future 15/15 guy at the keystonr. His plus hit tool should augur well for strong batting averages.

Rafael Montero made his first start of the season last week, allowing three runs over 5 2/3 innings, but was promptly placed on the disabled list after experiencing shoulder inflammation. There’s currently no room in the current iteration of the Mets rotation, but there are a number of scenarios that could pave the way for the debuting of two mega prospects: Noah Syndergaard and/or Steven Matz. It’s an arms race at Triple-A Las Vegas, as the two pitchers have alternated dominant starts over the last two rotation turns. Syndergaard, AKA “Thor,” was off to a slow start due to forearm tightness and, then, illness, which forced him to miss a start. Over his last two outings, though, he’s thrown 14 scoreless innings and allowed just 6 hits and two walks, striking out 19. Thor’s hard-throwing lefty counterpart, Matz, has been equally good, taking a no-hitter into the seventh inning on April 24th and striking out 12 batters in seven innings in his most recent start (April 30th). The Mets are in first place and the Nats, yet again, do not look as dominant on the field as they do on paper (who ever does?). Jacob deGrom has never pitched more than 147 2/3 innings, Matt Harvey is just back from Tommy John, Jon Niese struggles with health and Dillon Gee is, well, Dillon Gee. Whether it’s a six-man rotation or injury that makes room for the Las Vegas duo, room will be made.

The Red Sox have two lefties dealing at Triple-A Pawtucket: Brian Johnson and Eduardo Rodriguez. Johnson, who doesn’t have overpowering “stuff,” is quality start machine. He’s allowed two or fewer runs in 26 of his last 29 minor league starts, dating back to the beginning of 2014. Should someone falter or suffer an injury at the major league level, he will in all likelihood get the call. Eduardo Rodriguez, acquired in return for Andrew Miller last season, has taken a step forward and is also thought to be major-league ready. He has a 1.82 ERA (2.12 FIP) in four International League starts. Like Johnson, his ceiling is that of a mid-rotation starter, but he’s younger and his stuff is more electric than the ultra-polished Johnson. It wouldn’t be surprising to see both of them make their big-league debuts sometime this summer.

Someone we haven't talked about much in these pages is Washington shortstop Wilmer Difo. He had a breakout 2014, slashing .315/.360/.470 with 14 home runs and 49 steals as a 22-year old in A-ball. He's got double-plus speed, or a 70 on the 20-80 scale, and was a major oversight when I compiled my Top-10 speed-threat list preseason (guilty as charged). Difo spent just three weeks at High-A before the Nationals decided to bump him to Double-A Harrisburg.

Corey Seager was promoted to Triple-A Oklahoma City this past week, and promptly recorded two hits in his first game. I wrote, at length, about Seager last week, which you can find here. He's going to need some luck, but if he continues to rake, he's an injury away from a major league debut. His strong contact skills should allow him to be productive from day one.

If you've been reading the Minor League Update these first three weeks, you'll be familiar with the name Blake Snell. After four consecutive scoreless starts at High-A, the Rays promoted Snell the Double-A Montgomery this past week. He responded to the good faith gesture by his organization and tossed six more scoreless innings, extending his scoreless innings streak 27. He struck out eight and walked just one in the outing.

Unlike the major leagues, the minors is teeming with shortstop talent. One player that's often overlooked in the discussion about future superstars is the Brewers' Orlando Arcia, brother of Oswaldo. At just 20 years old, Arcia is scorching the Southern League (Double-A) at an age most players are in the low-low minors. He's been known mostly for his defense, but it looks like the hit tool is making itself known. His ceiling as a fantasy prospect is limited, though, thanks in part to middling projection in terms of power and speed.

Trevor Story, whose prospect star had faded, after reaching its apex a few years ago, is making plenty of noise in the Eastern League in the young season. His profile is similar to something like Brian Dozier's: 20/20 potential with walks but lots of strikeouts. It's a profile the Rockies are familiar with.

The Lord Byron Buxton has come to life after putrid start to the season. In his first 10 games, he walked just once with 14 strikeouts. In his last 11 games, however, he's got eight walks against just three strikeouts. He also has multi-hit efforts in seven of his last nine games — including four triples in four games. All said, he's gon' be just fine. His teammate, Miguel Sano, however, is still firmly in Strugglesville. He's got five home runs, but is striking out at a 25-plus percent clip and hitting just a buck sixty-two. Like Buxton, he's probably just shaking off the rust. The month of May will be important for both players, as it will likely determine whether or not they make their major league debuts in 2015 or 2016. My money is on 2016.

Carlos Correa is establishing himself as a formidable challenger to Buxton at the top of prospect rankings. He's slashing .371/.451/.679 with five home runs and 10 stolen bases. Praise is heaped on Correa for many reasons, but speed isn't usually one of them. He does, however, have a track record of base-stealing prowess in spite of just "average" speed (he stole four bases this past Friday). Per Speed Score, a stat created by none other than Bill James, Correa has the largest gap between his speed grade, in scouting terms, and his actual steal output and efficiency. He steals with great efficiency by getting good jump and "picking his spots" (think vintage Chase Utley). If this ability carries over to the major leagues, Correa could be an even better fantasy asset than we anticipated. If he keeps up the raking, he should get a chance sometime this summer.

Julio Urias continues to dazzle the Texas League. He leads said league in nearly every meaningful stat, as an eighteen year old — think about that for a second. He had two starts this past week, the first of which he went six scoreless innings, facing the minimum, with 10 strikeouts and no walks. He recorded his tenth strikeout on his seventieth pitch of the game, incredible. If Urias keeps it up, he could be in Triple-A at some point this year, and, heaven forbid, the majors. If the Dodgers can't get their so-called ducks in a row, it's not completely out of the question the young lefty makes his major league debut in 2015. Once again, it's highly highly unlikely. But hey, I'm all for history being made.

Before the season started, I put together some lists, ranking the best power and speed threats in the minors. Beyond the obvious (Joey Gallo has power; Byron Buxton has speed), I mentioned some players who are making me look great (thanks, Jorge Mateo, Roman Quinn) and others who are close to being demoted (Teoscar Hernandez). Mateo, specifically, has already swiped 20 bags in just 22 games. Health is Mateo's...do I even say it?... achilles heel, so he'll have to stay healthy to continue his ascent up prospect lists. At Double-A Midland, Matt Olson is back to his ways of slugging home runs and drawing walks. He's launched six bombs already and leads the Texas League with 22 walks in 23 games.

That'll do it for now. Make sure poke through this spreadsheet I assembled (it took hours an hours of data entry). It includes a number of interesting names I glossed over above. IF you want to see the pitching stats, click on the PITCHERS tab at the bottom of the spreadsheet.

Wanna get more value from your sleeper picks? Play SuperDraft! Each player's score is determined by a multiplier. Pick the chalk or the sleepers or both! Use promo code ALARM to play with the @fantasyalarm #FAmily
COMMENTS
Load More Comments..