One of the popular refrains I hear about MLB best ball is, “I wish there was a roto version.” Points leagues lack the nuance many fantasy baseball managers crave. RT Sports actually has a roto best ball offering in their Draft Masters packages. The way they achieve this is by eliminating bench spots. You draft a starting roster and that’s what you get. There’s certainly some risk that injury or suspension could sink your team. If you think about it, losing an early pick can often be just as problematic when you can replace them, though. I’ve been drafting more of these this year and here are some key differences to address in this particular flavor of best ball. 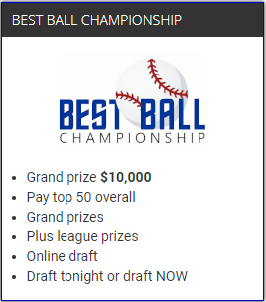 So, play hard and remember to play Best Ball Draft Masters for fun, practice and cash or the Best Ball Championship where you can turn $20 into $10,000!