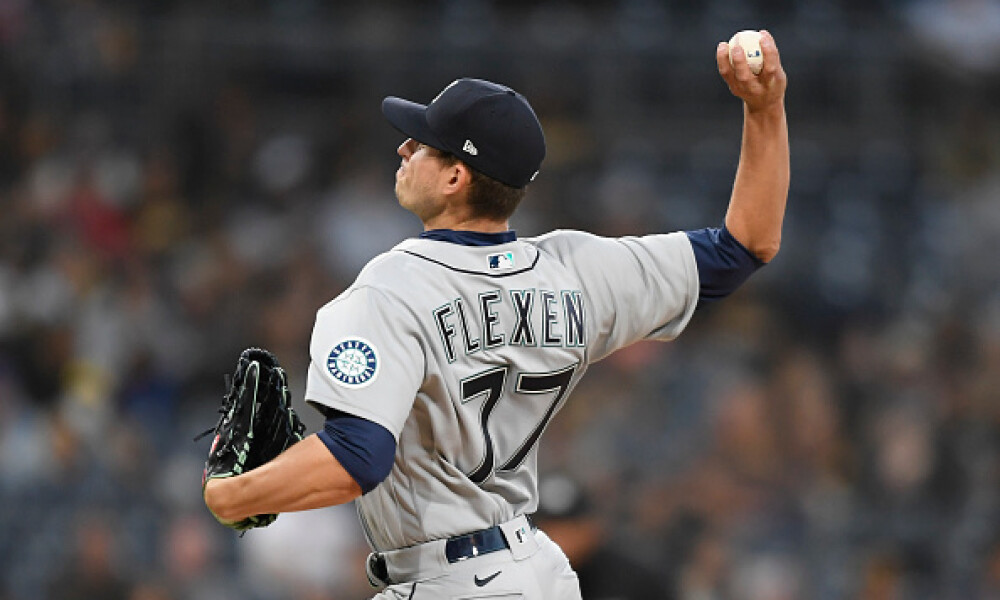 Brandon Belt (SF); FAAB Bid: 2-3% - Depending on your league settings Belt is potentially eligible both at first base and in the outfield, and that flexibility is plus. He consistently bats in the middle of the order for San Francisco and entering play on Wednesday, Belt is hitting .271 with three home runs and seven RBI over the last 14 days. From a power and run production standpoint Belt has been consistent to start the season on his way to 11 home runs and 30 RBI but his batting average has improved each month (.212, .250, and .308) so far this year. Belt does the majority of his damage against right-handed pitching (nine of his 11 home runs) but he has hit well (.333) against southpaws in limited work (42 plate appearances). Belt also sees a noticeable improvement at home, especially in batting average (.321 compared to .183) but the overall body of work is pretty solid.

Nate Lowe (TEX); FAAB Bid: 1-2% - We are a long way from Lowe’s prolific start to the season, but that doesn’t mean he isn’t still a serviceable option. Six of Lowe’s nine home runs did come in April, along with a .277 batting average, and entering action on Wednesday he is batting just .237 with one home run and seven RBI. The likely landing spot for Lowe is probably somewhere in between his April and June performances, and in the last 14 days he is hitting .278 so perhaps that is leveling out. With a launch angle of just seven degrees we knew that the home runs weren’t going to last but Lowe does have a solid 11% barrel rate along with a 44.5% hard hit rate so we are dealing with a skilled hitter who generally has a favorable spot in the batting order (either second or fifth in the last week). At this point if you are left to fill a hole on your roster, there are worse options than Lowe. For good measure, Lowe did go deep Wednesday night.

David Peralta (ARI); FAAB Bid: 1% - It’s hard to miss Arizona’s struggles these days but that doesn’t mean we should be looking past Peralta. Not every waiver wire pickup promises to be a life altering transaction, that is especially the case towards the end of June, but that doesn’t mean they should be taken lightly or they are without value. In some cases, it is better to just look for solid production instead of trying to shoot for the moon (that is coming next). Peralta is going to play just about every day and the dependable outfielder is hitting .353 over the last 14 days prior to Wednesday’s game. If you are looking for power, Peralta might not be your guy, but you aren’t going to find too many true sluggers on the wire. While Peralta has just four home runs, the outfielder has you covered with run production as he has 36 RBI on the season to go along with a solid .261 batting average.

Keston Hiura (MIL); FAAB Bid: 2% - The potential bid prices really could run the gamut here. I chose to go with a more conservative approach given how we ended up in this situation, but Hiura could turn out to be either a colossal waste of FAAB or a season defining addition. If we go based on his pre-season ADP then the latter is the case, but considering Hiura has already been demoted twice, I’m leaning more towards the former. There were legitimate concerns about Hiura entering the season, despite his ADP, and he has done nothing to put those concerns to rest. Instead, the opposite is true as Hiura was hitting just .130 with Milwaukee prior to his third stint in the majors with 39.3% strikeout rate. By no means should Hiura be defended, his .093 ISO doesn’t look favorable on his power (although he does have a 19.4 degree launch angle), but he does have a .220 BABIP. On the other side of things, Hiura is hitting .403 in 20 games in Triple-A this season with an insane .571 BABIP along with five home runs and 14 RBI. At this point Hiura has proven that we can’t expect that level of production from him, but he has to be better than what he has shown. Just don’t go crazy looking for it.

Kolten Wong (MIL); FAAB Bid: 2-3% - Hiura’s neighbor in the infield is a little more safe and secure and might be left kick around the waiver wire since returning earlier this week from the Injured List. Wong took a .287 batting average into action on Wednesday and with five stolen bases he might be one of the few sources of speed available on the waiver wire. Batting at the top of the order (28 runs scored), Wong should continue to run for Milwaukee but the fact that he has been caught stealing four times is a little concerning. With six home runs Wong is on the best power pace of his career but it hasn’t come at the expense of batting average (.281). Wong is barreling the ball up better than at any point in his career (6.5%) while also sporting a career best 38.3% hard hit rate.

Chris Flexen (SEA); FAAB Bid: 1% - Over his last three starts Flexen has emerged for Seattle with just a 1.74 ERA and 0.82 WHIP in 20.1 innings. This pace isn’t sustainable for the right-hander, who also struck out an impressive (for him) 17 batters in that stretch. The strikeouts are a pleasant surprise as Flexen is striking out just 6.05 batters per nine innings overall this season, but he has shown the ability in the past to be closer to league average there. With an xFIP of 4.23, compared to a 3.87 ERA, the right-hander is proving that he can be solid option as he is walking just 1.70 batters per nine innings. A noticeable change for Flexen compared to his previous major league stints is the decreased reliance on his fastball while increasing his slider and changeup usage while enjoying a 50% groundball rate.

Kwang Hyun Kim (STL); FAAB BID: 1% - Kim generally doesn’t pitch deep into games, just four innings against the Braves in his last start, but he does a good job of limiting the damage. He is facing the Pirates in his next start so there is a solid chance for him to get his second victory of the season as the match-up doesn’t get much more favorable than that. With 3.60 ERA and 1.32 WHIP the ratios could go either way and 44 strikeouts in 50 innings doesn’t really jump off the page either. However, it’s hard to imagine Kim imploding here against Pittsburgh and he does give you a good chance at a victory.

Caleb Smith (ARI); FAAB Bid: 2% - It shouldn’t come as a surprise that Arizona lost on Wednesday, but it can’t be pinned on Smith who one run over six innings while striking out six. Smith lowered his ERA to 3.03 but we should still tread carefully here as he has walked 4.55 batters per nine innings which feeds into his 4.75 xFIP. We are going to get strikeouts, 10.16 per nine innings, but I would like to see a groundball rate higher than 28.2%. At this point we aren’t going to find the perfect pitcher on the waiver wire, but there is enough here from Smith that he can be helpful.

Daniel Bard (COL); FAAB Bid: 3% - Take the saves when you can get them. Just do so under the caveat that there is a potential cost to this, your ratios. Depending on your roster situation and place in the standings though, you simply might not have a choice. That brings us to Bard who will be getting saves at least for the next month until he is possibly moved at the trading deadline. Bard picked up his tenth save of the season on Wednesday, his fourth in the last 14 days, but you have to look away for the ratios; 4.15 ERA and 1.57 WHIP. It’s not all bad though as Bard is striking out 11.57 batters per nine innings and his 3.52 FIP and xFIP say that things should be better.

Chad Green (NYY); FAAB Bid: 0-1% - We aren’t in for the saves here, and that is alright. While we are out there chasing saves and wins, our ratios sometimes take a hit. It is only natural, but it is something that does require some management. The Yankees heavily rely on Green as multi-inning piece, 5.2 innings in the last 14 days entering action Wednesday, and it is generally in key spots as he vulture two wins in that stretch while striking out eight and not allowing an earned run.