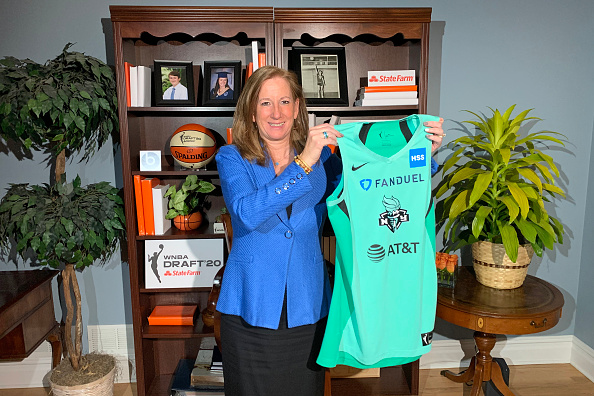 In the wasteland that has become our sports landscape in the time of COVID-19, we got a temporary respite in the form of the 2020 WNBA Draft. In addition to providing some much-needed sports content for an evening, the draft also served to significantly shake up the fantasy prospects of several teams and players. Let’s take a look at the most important moves and how they should affect our fantasy expectations whenever the WNBA resumes.

The Tina Charles trade was technically a few days before the draft, but since we haven’t had a chance to talk about it yet, let’s discuss it here. The Mystics already had six forwards on the roster who averaged more than 0.90 fantasy points per minute last season, and then they added a seventh in Tina Charles. It is still unsettled who will come off the bench out of Charles, LaToya Sanders or Emma Meesseman, but I’m not sure how much it will matter. All four will almost certainly average under 30minutes per game, and they may not get much over 25 mpg. I think Charles and Meesseman both figure to see their usage and fantasy production decrease, even on a per-minute minute basis. As such, it’ll be awfully hard to find good fantasy values in this frontcourt, especially early on. Charles, Meesseman and Elena Delle Donne will always be capable of having a big fantasy game in 20+ minutes, but you’ll likely never know when it is coming.

Number One overall draft pick Sabrina Ionescu will be the overwhelming favorite to win Rookie of the Year, but Chennedy Carter may be in the best position of any rookie to produce right away, especially for fantasy. The point guard from Texas A&M was the fourth overall draft pick after finishing sixth in Division I in scoring last season. Now she’ll be handed the keys to an Atlanta offense that was by far the worst in the league in 2019. Carter probably won’t lead the Dream in shot attempts (that honor will likely fall to Courtney Williams) but she has an excellent chance to finish second. Carter probably should play 30+ minutes per game right away for this team, but even if she doesn’t, 20+ minutes with a high usage rate will be plenty for fantasy. Carter’s ceiling for fantasy is what Arike Ogunbowale did last season, and that is higher than any other rookie outside of maybe Ionescu.

The Liberty Roster Is Made Up Exclusively Of Guards

That is a slight exaggeration. They still have Amanda Zahui B. and Reshanda Gray. Neither is a starter on a playoff team, but they are solid rotation bigs in this league. With Tina Charles gone, both figure to be solid cash plays early on, even if their ceilings are not particularly exciting. The Liberty did select Kylee Shook and Leaonna Odom with their first two picks in the second round, and they still have 20-year-old Han Xu, but unless they go into full tank mode right away, it is unlikely they will do much to take playing time from Gray or Zahui B.

The Liberty’s most interesting pick was their second in the first round, Megan Walker from UConn. If Walker can play the four at the next level, she could form an interesting young lineup alongside Ionescu and Kia Nurse. If Walker mostly plays the three, she is awfully redundant with Nurse and Jocelyn Willoughby, who the Liberty acquired in a trade with the Phoenix Mercury.

The Liberty have some intriguing young talent, but I don’t see any reason to play anyone for fantasy outside of Zahui B., Gray (assuming she starts), Nurse and Sabrina Ionescu. If someone emerges from the glut of young guards, I will be interested, but I’m skeptical that happens this season.

There Is A Big Opportunity In Minnesota’s Backcourt

Lynx head coach Cheryl Reeve told anyone who would listen this offseason that she was comfortable with Rachel Banham, Lexie Brown and Cecilia Zandalasini as her point guards, even though none of them have much experience handling the ball in the WNBA. She doubled down on that by passing on Tyasha Harris, widely considered the second-best point guard in this draft, to take her South Carolina teammate Mikiah Herbert Harrigan.

Herbert Harrigan was not a first-round draft pick in most mock drafts, including mine, and she may not even be in the rotation for a team that has plenty of frontcourt depth. Taking her over Harris was certainly a vote of confidence for Minnesota’s guards. That being said, the Lynx were able to nab the next point guard off the board, selecting Crystal Dangerfield from Connecticut in the second round. Dangerfield and third-round pick Erica Ogwumike will likely have a chance to earn playing time at the point this season, but it certainly looks like Banham, Brown and Zandalasini will get the first crack at it. Whoever starts at the two guard spots for Minnesota will likely be in several of my DFS lineups early on, though I feel like Lexie Brown probably has the highest ceiling thanks to her three-point shooting.

How Much Will Lauren Cox Play?

The Fever struggled to find minutes for Teaira McCowan early on last season, preferring to play Candice Dupree and Natalie Achonwa ahead of her. Now they add Lauren Cox to the mix, and the frontcourt rotation could be awfully crowded. This is a new Fever regime, and they should try to get Cox and McCowan as many minutes together this season as possible, but that could be hard to do with two well-respected vets on the roster. Cox will probably be a popular fantasy play as a rookie, but I wouldn’t just assume she’ll play 20+ minutes per game while Dupree and Achonwa are both healthy.

Who’s Going To Play In Dallas?

The only player guaranteed to play 30ish minutes per game next season is Arike Ogunbowale. If I had to guess, the player with the next-best chance is Number Two overall pick Satou Sabally. Sabally is probably the second-best player on the team, but she will have to compete with fifth overall pick Bella Alarie as well as incumbent Kayla Thornton and 2019 fourth overall pick Katie Lou Samuelson for minutes at the three.

Allisha Gray has averaged at least 26.7 minutes in all three of her WNBA seasons, including a career-high 30.5 minutes per game in 2019, but she will likely get squeezed for minutes by rookie Tyasha Harris as well as the returning Moriah Jefferson.

Dallas didn’t add any post players in the draft, but they already had a logjam there with Astou Ndour, Isabelle Harrison, Megan Gustafson and Kristine Anigwe.

Dallas has one of the deepest teams in the WNBA, but they are lacking in All-Star quality talent. If I had to pick anyone on this team to break out, besides Ogunbowale and Sabally, it would be Ndour and Jefferson. I think Ogunbowale is the only sure thing on this roster for fantasy, but I will be paying close attention to who is getting minutes for this team when the season begins.

In my breakdown of Connecticut’s offseason, I noted that they could really use a couple more rotation players, but that it could be difficult to find them considering they only had the 11th picks in the second and third rounds. I think they pulled it off.

I thought Kaila Charles was a borderline first-round pick, but she fell all the way to the end of the second round. She is probably Connecticut’s backup three right away, and I think she has a chance to step into the starting lineup if any of the starters goes down with an injury, especially one of the forwards. It might take two injuries, as Natasha Hiedeman probably gets the first spot off the bench, but I think Charles wound up in the perfect situation.

Third-round pick Juicy Landrum is a three-point specialist, which was another area of need for this team after Shekinna Stricklen left in free agency. Landrum is probably on the outside looking in for a rotation spot, but she could earn more playing time if she can knock down open shots.

Put Me In Coach

I know it might not be feasible financially, but from a talent standpoint, the WNBA really needs to expand to at least 14 teams. There are good players every season who are left off rosters or buried on benches because most teams in the league are stacked with talent. With this draft, a few players, in particular, stand out as potentially very good players who may not get a chance right away..

I loved the Sky drafting Ruthy Hebard with the eighth overall pick, but it’s nearly impossible to picture James Wade playing her ahead of Stef Dolson, Cheyenne Parker, Jantel Lavender or Azura Stevens. Hebard will probably have to wait until 2021 when Parker and Lavender are both free agents, but I’m hoping that’s not the case. Lavender and Stevens are both coming off major injuries, and if Hebard gets an opportunity in 2020, I will gladly play her for fantasy.

Similarly, I think Te’a Cooper has a chance to be the best shooting guard on Phoenix’s roster, perhaps from day one. She will start the season behind Diana Taurasi and Bria Hartley on the depth chart, but Taurasi will be 38 years old in June and Hartley has never been even an above-average WNBA bench player. Whenever Cooper gets her chance, I’ll be paying close attention. Other rookies who I think could impress if they ever get a chance to play include Erica Ogwumike, Mikayla Pivec, Kiah Gillespie and Beatrice Mompremier.