Steve Pimental does a deep dive into the WNBA offseason of the Phoenix Mercury, including their acquisitions and losses and what the fantasy outlook is like for key players. 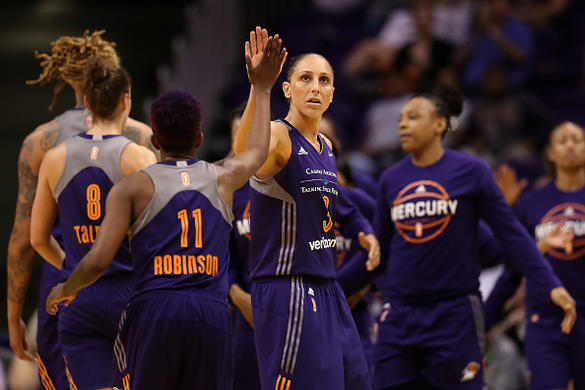 Phoenix has widely been considered one of the big winners of the offseason and one of the favorites to win the WNBA title, and I pushed back against that pretty hard early in the offseason. This team barely limped into the playoffs last season only to no-show against the Sky, and I’m not sure replacing DeWanna Bonner, Leilani Mitchell and Briann January with Skylar Diggins-Smith, Bria Hartley, Jessica Breland, Nia Coffey and Kia Vaughn is much of an upgrade, if it is one at all.

That being said, if they were going to lose Bonner anyway, they couldn’t have done much better than replacing her with Skylar Diggins-Smith. In Jessica Breland (and, to a lesser extent, Vaughn) the Mercury finally have a legit backup for Brittney Griner. I may not like Phoenix’s offseason as much as some, but there’s no doubt they made some strong moves

My biggest problem with Phoenix’s offseason was the Bria Hartley contract. In the past few weeks I have panned the signings of Kahleah Copper, Tiffany Mitchell and Layshia Clarendon, but Hartley is making by far the most money of that group, and I cannot for the life of me figure out why. Hartley is 27 years old and has played six seasons in this league, so it’s hard to argue she’s got any significant growth left in her game.

The Mercury had better hope I am wrong, because Hartley hasn’t been anything more than an okay backup in her time in the league. She never really distinguished herself in three seasons on one of the worst teams in the league, and while she will probably get better looks playing next to Skylar Diggins-Smith and Diana Taurasi, it’s hard to be excited about someone who has shot 38.1 percent from the field in her career and 32.3 percent on threes. Phoenix may still be able to compete for a title despite this massive overpay, but it is impossible to argue this is a good use of their resources. Even if Phoenix figured they had to spend the money on someone, I don’t know why they gave Hartley a three-year deal. I cannot imagine she would have turned down $185,000 for one year, or even two. The Mercury should be a playoff team for at least the next three seasons with both Griner and Diggins-Smith under contract, but it’s hard to picture them getting over the hump with Hartley’s contract weighing them down. 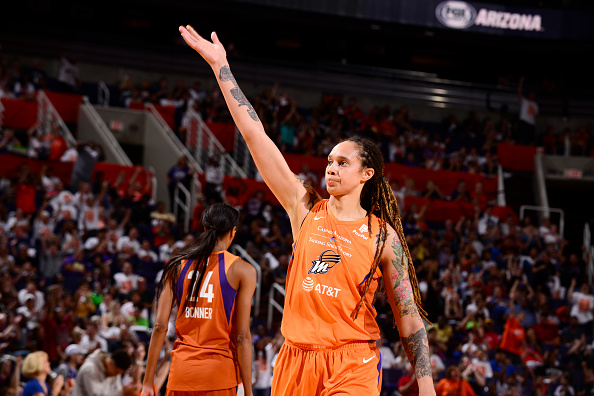 Phoenix has the 10th pick in the draft, and with 11 players under contract, whoever they pick is likely to make the team, barring a trade. Phoenix should be in a position to go with the best player available with this pick, especially since whoever they take here shouldn’t be expected to contribute right away. Phoenix should be ready to pounce if someone like Tyasha Harris, Ruthy Hebard or Beatrice Mompremier falls this far.

Beatrice Mompremier might have the highest upside of that group, and it might help her that Phoenix wouldn’t count on her to contribute right away. If Phoenix does draft a big, that could help soften the blow if Jessica Breland and/or Nia Coffey leave in free agency after the season.

Phoenix doesn’t really have a true point guard on the roster outside of Skylar Diggins-Smith and Diana Taurasi, so Crystal Dangerfield could be the pick if Harris, Hebard and Mompremier are all off the board.

It’s hard to imagine the Mercury gave Bria Hartley all of that money simply to bring her off the bench. It wouldn’t be at all surprising if Yvonne Turner eventually took her place in the starting lineup, but so long as the Mercury are winning and Hartley isn’t actively hurting her team, she should start.

Diana Taurasi started every game she played last season despite being objectively terrible, so she should continue to start at least so long as she is healthy. Similarly, Skylar Diggins-Smith and Brittney Griner are locked into starting spots.

Breland’s role could also depend on how well Kia Vaughn plays. If Vaughn is a legit part of the rotation and she can take the backup five minutes, that would free Breland up to play more minutes at the four.

If Breland doesn’t start at the four, that spot would likely fall to Brianna Turner. Turner looked overmatched at times as a starter last season, but overall she held her own as a rookie after being drafted late in the first round. Turner could fit with the starters as a low-usage big who will rebound and play defense, especially if Diana Taurasi returns to form.

In the wake of the Skylar Diggins-Smith trade, there were a lot of people stating the Mercury had a new big three in Diggins-Smith, Griner and Diana Taurasi. To a large extent, Phoenix’s chances this season could hinge on if they, in fact, do have a big three.

Diana Taurasi will turn 38 in June. She was literally the worst player in the WNBA last season, averaging 4.3 points and 2.2 turnovers in 21.4 minutes per game on 10.3 percent shooting. Of course, she only played six games while she dealt with a back injury, and that injury clearly affected her when she was able to play.

By all accounts Taurasi has been healthy this offseason. She started seven games for Team USA, averaging 18.0 minutes while shooting 37 percent from the field and 35 percent on threes. In her last full season in the WNBA in 2018, Taurasi averaged 20.7 points, 3.5 rebounds, 5.3 assists and 2.6 turnovers on 44.6 percent shooting from the field and 38.3 percent shooting on threes in 30.0 minutes per game.

At the very least, Taurasi should space the floor when she is healthy, and I think she gets the best out of Brittney Griner when the two play together. She is just just two years removed from being a very good player, and getting to rest her back these last couple of months is probably a good thing. We cannot rule out that this truly is a big three.

Then again, how realistic is it to expect a 38-year-old with back problems to stay healthy for an entire season, let alone play at a high level? It’s nice that she has been healthy with USA Basketball this offseason, but 6.4 points per game in 18.0 minutes on 37 percent shooting is not anything to write home about. Katie Lou Samuelson, who barely cracked the rotation for the Sky last season, averaged 6.6 points in 15.1 minutes on 39 percent shooting for Team USA. I think we have to at least consider that the Taurasi we saw in 2018 and for 15 WNBA seasons simply isn’t coming back.

As is often the case, the real Diana Taurasi probably lays somewhere in the middle of the 2018 version and the 2019 version. At the very least, Taurasi, when healthy, should be one of the best floor spacers in the game. She has gravity off the ball based on reputation alone, and her 35 percent shooting from three with Team USA appears to indicate her shooting stroke has returned at least somewhat. Taurasi spotting up around Skylar Diggins-Smith and Brittney Griner pick-and-rolls is not a bad way to run your offense, and probably makes you a sixth or a seventh seed and a fringe championship contender. I think that’s exactly how I view the Mercury at this point in time.

If there is reason for optimism in Phoenix outside of Diana Taurasi looking like her old self, it lies with Phoenix’s young players. The Mercury have Brianna Turner, Alanna Smith and Sophie Cunningham all returning for their sophomore seasons, and if they can all take a step forward, Phoenix would have the depth to match up with teams like Washington, Las Vegas and Los Angeles. If those three are simply fringe rotation players, Phoenix will likely be behind those teams, and perhaps a few others, in the playoff race.

The Mercury have 6/1 odds to win the WNBA title, which I think is too high. I get why they would have better odds than the Chicago Sky, who whupped them in the playoffs, but I don’t think their odds should be that much better.

More importantly, I don’t know how you can consider betting Phoenix at 6/1 when you can get Seattle for the same price or Washington for 7/1. Phoenix is probably capable of winning if everything goes right, and I would be interested if they were something like 10/1, but there are much better bets at their current odds.

I have thought for a long time that Diana Taurasi has brought out the best in Brittney Griner, so I’m excited to see Griner with Taurasi at something resembling full strength. Griner averaged 38.6 fppg last season, but I think she goes over that, at least slightly, in 2020. Griner averaged 39.7 fantasy points in 2018 and a career-high 41.0 in 2017. I’m not necessarily expecting a new career high for Griner this season, but I think it is on the table.

The other factor that could play in Griner’s favor is playing with Skylar Diggins-Smith. Diggins-Smith was able to get the most out of Glory Johnson when they played in Dallas, and she could pay similar dividends for Griner. Diggins-Smith has scored at least 34 fppg in three of her past five seasons, and while there could be an adjustment period while she acclimates to her new teammates, I think she should continue to have the ball in her hands a ton and make a lot of players for herself and her teammates.

I’ll be interested to see how Diggins-Smith is priced after a year away from the game. She led all guards in fantasy points in 2017 and 2018, and she’s the only guard in the league to average more than 34 fantasy points in a season since 2013. If she isn’t the top-priced guard at the start of the season, she could be a nice value.

At this point, Diana Taurasi is a GPP play who is viable for cash games if she is cheap enough. She averaged 33.7 fppg in 2018, and while I think that is still on the table for 2020, it is her only season of 30+ fppg since 2013. We’re probably looking at someone who scores in the low to mid 20s in fantasy points, and that will be just fine if she is priced based on her 2019 numbers.

It is doubtful anyone else on this team gets enough usage to be relevant for fantasy most days. Griner, DeWanna Bonner and Leilani Mitchell were the only players on this team to average more than 15.5 fppg last season. Bonner and Mitchell should be replaced by Diggins-Smith and Taurasi, and that doesn’t leave much for anyone else. Jessica Breland and Yvonne Turner have a chance to be useful, but they’ll always be at best the fourth option on offense, and they aren’t good enough to turn that into a lot of fantasy production.