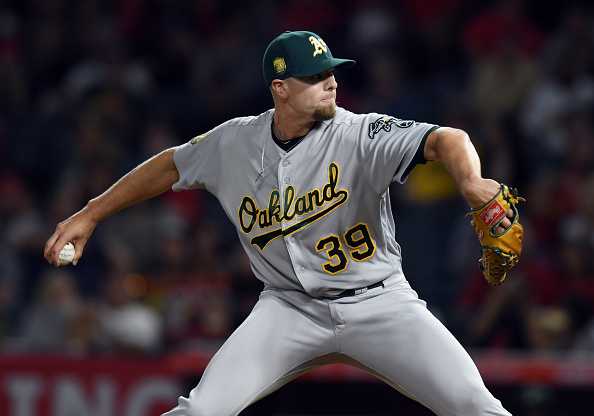 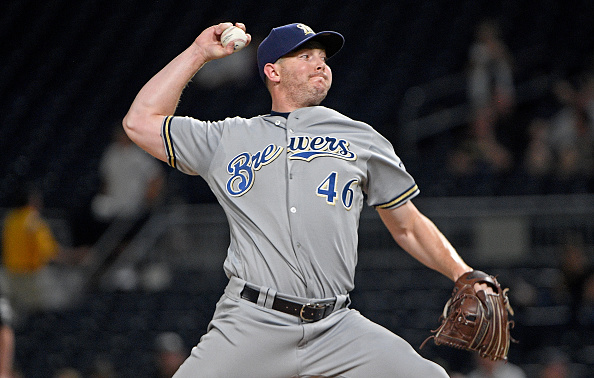 In last week’s Bullpen Report, we looked at four closers who I believe could bounce back after a down year in 2018. During the course of discussing Corey Knebel I wrote “In hindsight, we probably should have been more leery of spending a high pick on someone who had a 4.74 BB/9 and a 91.9 LOB% in 2017.” That got me to thinking: Who is this year’s Corey Knebel ? Who is being drafted highly despite some warning signs that 2018 might not be for real? Let’s look at some closers who I don’t necessarily expect to return value on your draft day investment.

Blake Treinen , OAK – Treinen is 30 years old (same birthday as me, actually), and I suppose he wouldn’t be the first reliever to break out in his late 20s after years of being terrible. Just two years ago, he had a 8.46 K/9 and 4.16 BB/9. In 2018, he had an 11.2 K/9 and a 2.35 BB/9. Treinen had a career-low 44.0 zone rate in 2018, but got a career-high 43.8 percent swing rate on pitches outside the zone. He also allowed a career-low 65.8 percent contact rate. Treinen is also due for some regression from an 85.9 LOB% and a 4.4 percent HR/FB rate. If Treinen actually is this unhittable, it won’t matter too much if he suffers some regression and allows a few more walks. I’m just leery of making someone with such a spotty track record the second reliever off the board.

Raisel Iglesias , CIN – Let’s start with Iglesias’s role. Manager David Bell said at the start of spring training that he wanted to use Iglesias in the most important spots in the game, and not simply in a traditional closer’s role.  If he is used more in tie ballgames or to get multi-inning saves, it could limit his availability and his safe chances. Maybe those losses would be offset by pitching more innings and getting more strikeouts, but I don’t think we should necessarily assume that is the case.

Of greater concern is Iglesias’s career-high 4.23 FIP last season. Iglesias had a .233 BABIP against and a 91.6 LOB%. Iglesias had a 3.13 BB/9 and a 3.20 K/BB. Iglesias has had a better ERA than FIP in each of the last three seasons, so maybe that is sustainable, but I still find it worrisome. The Reds probably don’t have anyone replace Iglesias even if he struggles, but I think paying for his 2018 numbers would be a mistake.

Jose Alvarado , TB – I have seen Alvarado all over the place in fantasy closer rankings. I think most people agree he has the skills to be a closer, though I feel like his 4.08 BB/9 in 2018 is getting overlooked a bit. Alvarado’s 5.47 BB/9 between Double-A and Triple-A was his lowest in the minors since 2013, his second time through rookie ball. I’m not sure he gets enough strikeouts to justify so many walks, though his 54.5 percent walk rate in the majors helps explain why he has been so good at keeping the ball in the ballpark.

I’m not sure why anyone would believe Alvarado has the closing job to himself this season. Sergio Romo had 25 saves for the Rays last season, and unless they are going to use him a lot more as an opener, I think this is at best a split workload based on matchups.

Jose Leclerc , TEX – I understand where the “next Edwin Díaz ” buzz is coming from, but maybe we should pump the brakes a bit on all of the hype. Leclerc’s 3.90 BB/9 in 2019 was by far his lowest at any level since A-ball in 2013. Even with his increased strikeout rate, I have a hard time seeing him keeping a sub-3.00 ERA if he is walking four or five batters per nine innings. Leclerc has gotten by in part by keeping the ball in the yard, with a 0.38 HR/9 in his career. The problem is Leclerc is not a groundball pitcher like Jose Alvarado . Leclerc had a 32.1 percent groundball rate last season and a 34.6 percent groundball rate for his career. Expecting a flyball pitcher in Arlington to continue to limit home runs at that rate is a big ask. Leclerc had a 3.10 xFIP last season, and I might take the over on a 3.10 ERA in 2018. Leclerc is probably not going to lose his job, but I’m not sure he is significantly better than Kirby Yates , Brad Hand or even Ken Giles .