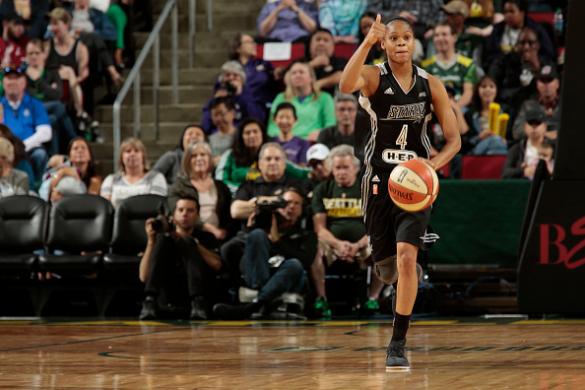 The Minnesota Lynx finally took their first loss of the season Saturday against Connecticut, but they have still been a statistical juggernaut in the WNBA this season. The Lynx have allowed the fewest points and rebounds in the WNBA this season, and have also forced the most turnovers. Only the Seattle Storm have allowed more free throws than the Lynx, and Minnesota leads the league in steals as well.

Alyssa Thomas and Jonquel Jones combined for 36 points and 16 rebounds Sunday, but prior to that game, Minnesota had been especially stingy to opposing forwards. Jones’s two worst games of the season came against Minnesota. The Lynx held Breanna Stewart to 14 points and six rebounds in their first meeting. Glory Johnson has just 16 points and 15 rebounds combined in two games against the Lynx this season.

If Elena Delle Donne has a big game against Minnesota I may have to rethink this strategy, but for now, I’m avoiding most players against Minnesota, especially forwards. Perhaps equally important, there is value to be had in players like Jones and Breanna Stewart whose season averages are a bit deflated because they struggled against the Lynx and also because they started the season slowly.

The other major storyline Friday is players returning from Eurobasket. Epiphanny Prince and Alex Bentley are expected to play, and it will be interesting to see how they are incorporated back into their teams. Prince had her best game of the season before leaving for Eurobasket, but Shavonte Zellous has exploded since then. Until we see Prince and Zellous share minutes, and the ball, I don’t think I’m playing either one.

The same goes for Alex Bentley and Courtney Williams. Williams has played great with Bentley out, and she probably deserves to stay in the starting lineup even with Bentley back. Bentley would be a great GPP target because she will probably shoot the ball better than she was before she left, but it seems extremely unlikely she gets anywhere near the same number of minutes with Williams playing so well. We will get more players returning from Eurobasket over the next week or so, and in most of those cases, I will want to see how they are used at least once before I invest in them for DFS.