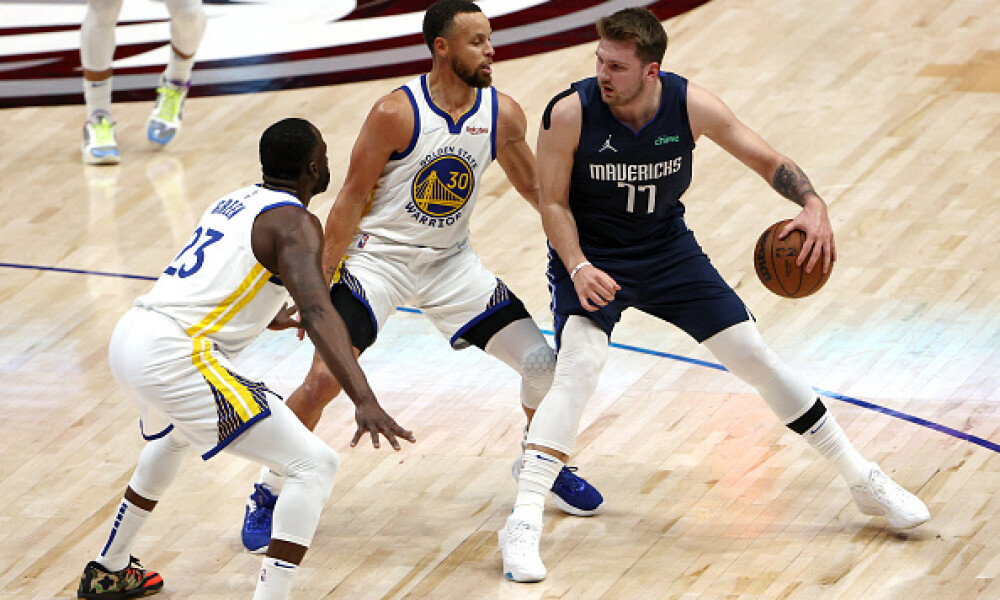 The NBA DFS showdown slate for Tuesday, May 24th features a Western Conference Finals Game 4 matchup between the Golden State Warriors and Dallas Mavericks. Before you build those NBA daily fantasy lineups, here's a quick overview of this series. The WCF shifting to Dallas didn’t change anything as the Warriors were victorious once again on Sunday in Game 3. Tonight, Golden State can clinch a berth in the 2022 NBA Finals by finishing the Mavericks off with a sweep. We'll get to more of the NBA DFS top plays, but expect Luka Doncic and Stephen Curry to be popular daily fantasy basketball lineup picks. Things do look clear on the NBA injury report for tonight, but keep an eye on any late-breaking player news. Even though Dallas’ season is on the brink, I don’t expect to see anything change from the NBA starting lineup perspective. Now, let’s review some top NBA DFS top picks for tonight's matchup between the Mavericks and Warriors.

If the Mavericks’ season ends tonight, it won’t be falling on Luka Doncic’s shoulders as he scored 40 points in 40 minutes on Sunday in a losing effort. We got both volume (23 shot attempts) and efficiency (11 field goals) from Doncic but more importantly, he did a great job of getting to the free throw and going 14 of 17. Doncic grabbed 11 rebounds for his third double-digit effort out of his last five games but he did have an off night from a playmaking perspective with just three assists. He has struggled with that aspect of his game at times this postseason, but we also know that Doncic and the Mavericks are going to go down swinging. In four of his last five games, Doncic has finished with between 61 and 70 DK points, and that should continue tonight.

Can we just take Sunday’s game and bottle it up for Stephen Curry? The point guard made 10 of his 20 shots from the field (including five of 10 from downtown), but more noteworthy is the fact that Curry finished with 11 assists. It was Curry’s first game with double-digit assists this postseason, but more importantly, it was the second straight game in which he broke the 30-point mark. There is more from where that came from, even if it hasn’t consistently been there.

It’s possible this is Jalen Brunson’s last game in a Dallas uniform and if it is, I would expect him to go out on a high note. The only issue with Brunson from Sunday was that he wasn’t as busy offensively, but the efficiency was there as the guard made seven of his 12 field goal attempts. It was still a solid day for Brunson as he finished with 20 points, five rebounds, and three assists and I expect his shot volume to increase by a few tonight.

Jordan Poole didn’t see a dip in playing time on Sunday, 28 minutes, but it was curious to see him only attempt four shots from the field. The guard made two of those four shots and all four of his free throws on his way to a 10-point, five rebound performance but we all know Poole is capable of more offensively. The good news is that it was his fourth straight game of double-digit scoring, and while there is some risk, we get offensive upside from Poole as well.

Once again, Klay Thompson is going to cost you tonight. Still, if he gets a similar workload to what he did on Sunday and only adds a few more shots, then we are in business. Thompson made just six of 18 shots, including only three of 10 from downtown, but he still finished with 19 points and seven rebounds. If Thompson is going to shoot out of his slump, then it could be a profitable night.

Kevon Looney only took four shots on Sunday, but does it really matter from a DFS perspective? The center made three of those shots to go along with three of four free-throw attempts to finish with nine points, but more importantly, Looney grabbed 12 rebounds. Golden State appears committed to playing Looney close to 30 minutes per game as of late, and a repeat performance (31.5 DK points) is very possible.

After struggling through Game 2 and scoring just four points, things got a lot better for Spencer Dinwiddie on Sunday as he scored 26 points in 32 minutes of action. It’s clear that Dallas is going to need, at a minimum, that level of offense from Dinwiddie tonight to remain competitive as their sources for offense are limited.

Talk about an empty 25 minutes of action for Maxi Kleber on Sunday as he missed all five of his shot attempts while grabbing just four rebounds and picking up two assists. All we are doing here is chasing the playing time once again tonight.

With Otto Porter out of the lineup tonight, we are looking for a low-cost beneficiary, and that brings us to Damion Lee. The guard has gotten limited run so far this postseason, but there are minutes up for grabs and Lee has shown offensive upside in the past.