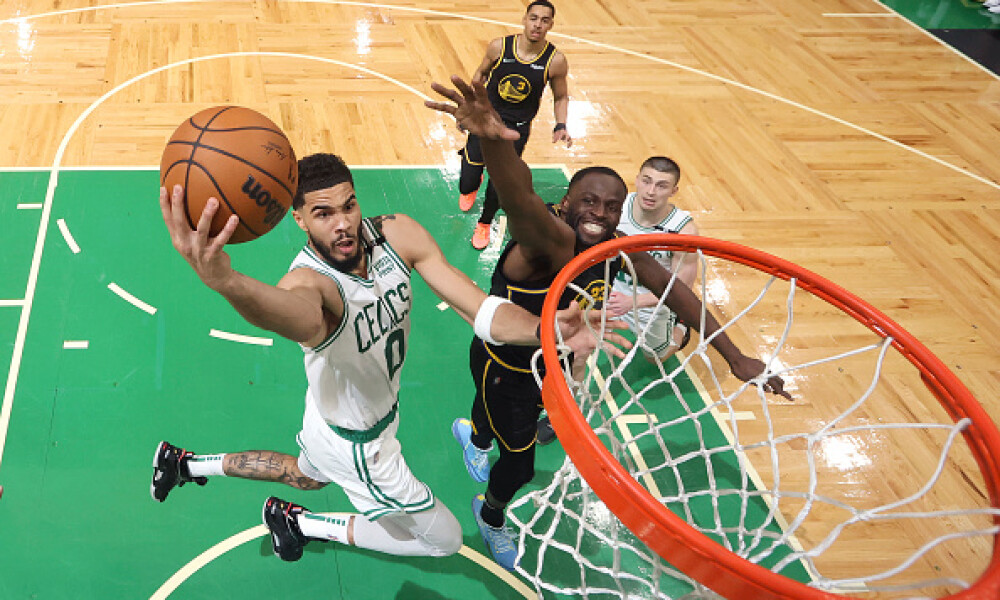 As expected, the Boston Celtics were a bit more conservative when handling the basketball during game three of the 2022 NBA Finals as they beat the Golden State Warriors by 16 points. The Celtics had more time with the ball and took 11 more shots than the Warriors. We also saw Stephen Curry hurt his foot and while he said he’s going to play, we don’t know how the pain in his foot will impact his shooting ability and if he’s not hitting his shots, the Warriors will be put on the brink of elimination. The Celtics saw solid bounce-back performances from Marcus Smart and Al Horford. Even Robert Williams was moving a bit better last game. Klay Thompson supported Curry nicely scoring 25 points, but if Curry isn’t as impactful offensively, Andrew Wiggins and Jordan Poole will have to step up and support Thompson because the Warriors lineup doesn’t have offensively-skilled big men in it unless the lane is open for them. Here are tonight’s core plays for DFS NBA lineups.

After taking 23 shots in 41 minutes, we can once again rely on Jayson Tatum heading into this game. He hasn’t even been shooting that well throughout the series as he hasn’t eclipsed shooting 43 percent in any game so far. Tatum has steadily grabbed five or more boards in all three contests and he’s dropped nine or more dimes in two of the games. The shot volume continues to be there and he’s producing consistently in other categories and that’s making him a viable DFS play night after night. He had his most successful DFS game in game three and he shot just 39 percent from the field. Tatum has also grabbed steals in five straight games. Expect him to continue to look to keep the ball moving as the Celtics will continue to prioritize Tatum on defense and after scoring 12 points in the series opener, he’s averaged 27 points in his previous 2 contests.

Despite injuring his foot towards the end of the last game, it’s being reported that not only will Stephen Curry suit up tonight but he won’t be restricted at all and because he’s had to virtually carry the Warriors offense through three games, he is certainly in play and worth the investment. He should once again take 21-26 shots and Curry has shot at least 48 percent from the floor and 50 percent from beyond the arc in 2 of 3 games in the finals. The Celtics haven’t been able to rattle Curry whatsoever, but we’ll have to see if his injured foot impacts his shooting motion. Curry has also posted four straight multi-steal games. If his shots aren’t falling or his injury brings down his speed, he could still salvage his DFS production by dishing more dimes even if that means his scoring takes a hit. He’s scored 29-plus points in every game this series.

Jaylen Brown is coming off of an excellent shooting performance hitting over 56 percent of his shots and nailing 4 three-pointers. Brown has started off his last two games strongly and he’s scored 24 or more points in 2 of 3 games in this series. He’s been a reliable rebounder and he’s pulled down six or more boards in every game in this series. Brown continues to have success grabbing rebounds against the Warriors after succeeding against them during the regular season. Brown has also produced five dimes and a block in two of three games. He’s taken no fewer than 16 shots in any game and with Tatum still struggling to hit shots overall, the Celtics will need Brown to keep his strong early shooting and scoring up so the Celtics jet out to a lead. He’s been a three to four-category fantasy producer and won’t draw as many investors for the CPT/MVP spot as Tatum and Curry will.

If Curry is in fact impacted by the injured foot, Marcus Smart will have a step on him when it comes to quickness and after seeing him rebound from his poor performance in game two, Smart will once again flirt with 40 minutes of action and he should take 14-18 shots tonight. Smart scored 24 points and pulled down 7 boards last time out. Smart has also posted five or more boards, five dimes, and steals in two of three games in the finals. If the three-pointers aren’t falling, Smart will have to attack the basket, and we saw him take 10 shots from inside the arc and it was encouraging seeing him take free throws. He’ll have to keep the physicality up on both ends of the floor and he’ll need to help keep the Celtics possessions alive on offense. Smart has shot over 47 percent from the floor in 2 of 3 games in this series.

Andrew Wiggins continues to see the shot volume and his scoring would be a bit more fruitful if he could his three-pointers a bit more consistently. Wiggins continues to find a lot of success in the mid-range. He’s dropped 18-plus points in 2 of 3 battles. He gets screened off the ball and then he gets open at the elbow. We also saw Wiggins get good positioning at the top of the paint and he’s grabbed six or more rebounds in his last two games. He’s been producing defensively on the stat sheet as well blocking multiple shots and grabbing swipes in two of three games in the finals. He needs to attack the rim more to try to get Robert Williams and Al Horford in foul trouble. If Curry needs to serve as more of a decoy on offense tonight, the Celtics will pick up on that and start putting more pressure on Klay Thompson and Wiggins should get fed a bit more and he’ll get higher-percentage shots than Thompson.

We haven’t heard anything negative in regards to Robert Williams's health since game two and thinking that he’ll once again play 25-30 minutes, let’s throw him out there. Williams is coming off of his most successful game of the series as he grabbed 10 rebounds and recorded his 3rd multi-block game of the finals. He’s actually had two four-block games against the Warriors and he’s also coming off of a three-steal game. Williams can’t be relied on as much offensively as he normally puts up shots from right under the basket or he’s the recipient of an alley-oop. Williams has been excellent at stopping the Celtics on the break and he’s certainly blocked some of their shots while they were driving to the basket. He’s cheap and the Celtics need his defense to help keep the Warriors from getting easy layups in the paint.

Derrick White didn’t take as many shots last game but he’s still getting a true rotation commitment after playing 24 minutes. When Marcus Smart’s shot is on and he’s not as careless with the ball, it will lower White’s production ceiling and playing time because he won’t have as much time with the ball. White has scored in double figures in two games in this series and he was very impactful for the Celtics with his long-range shooting before missing all three of his three-pointers in game three. White has posted blocks and steals in both of his last two contests. With the thought process that he will hit a three-pointer in this game, we should see him once again score in double figures. He should take 8-12 shots this evening and should play 25-30 minutes. He’s hit the 30-minute mark in 2 of 3 battles in this series. White is a hound of a defender and has been good at weaving through screens when on defense and getting in the opposing guard's face on the perimeter.

Jordan Poole will need to help bolster the Warriors offense if Curry can’t move at 100 percent. Poole has played no fewer than 23 minutes in any game in this series but his shot numbers have been up and down. Under normal circumstances, Poole wouldn’t be included here because it’s hard to expect that the Warriors will be up big in this game but being that Curry’s foot is hurt and if the Warriors shots are on point early, we could see more of that shot volume be given to Poole. The Warriors have very limited frontcourt offense and they will need to be hitting their threes in order to stay in this series and Poole is the next man up if Curry isn’t hitting his shots. We should see Poole take 8-12 shots tonight. As an added bonus, he’s also contributed three dimes in both of his last two outings.