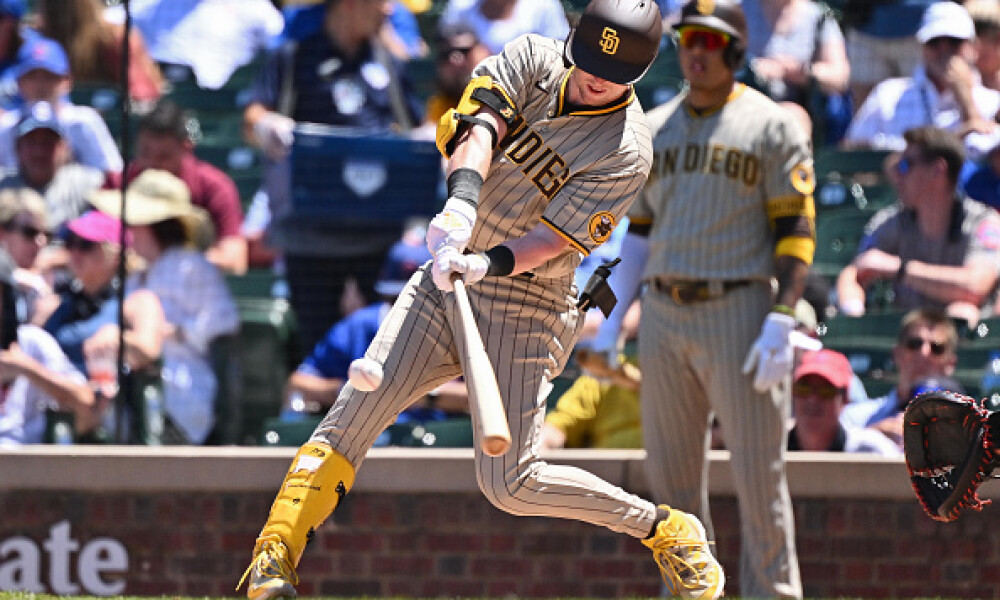 After a productive 2021 season for the San Diego Padres, Jake Cronenworth was a hot commodity in fantasy baseball circles heading into 2022 as a guy who could provide a reliable batting average with some pop and a bit of speed. In a San Diego lineup that features a ton of star power, headlined by Fernando Tatis Jr. and Manny Machado, Cronenworth just might be the key to it all for the Padres. However, it was an incredibly slow start for Cronenworth, as he hit just .160 through the first 15 games of the year, and just .210 through the end of May. Questions were circling about whether or not to drop Cronenworth in fantasy baseball leagues and send him to the waiver wire, or just make him a fantasy baseball trade piece, but the switch was flipped in June, and Cronenworth has been one of the more productive fantasy baseball players with second base eligibility. In the month of June, he’s leading Major League Baseball with a 1.7 WAR! What happened that sparked this change, and is it sustainable the rest of the way? Let’s analyze Cronenworth’s turnaround here in the month of June, and what it means for fantasy baseball managers.

The extent of his slow start was surprising, but the fact that it was a bit of a slower start maybe shouldn’t come as much of a surprise. We saw a similar story last year with Cronenworth, in that his best months were when it got a bit warmer. Sure, he fell off towards the end of the 2021 campaign, but he hit .308 in May and .284 in June. This year, he’s hit .354 thus far in June. What has led to the turnaround that has his expected wOBA skyrocketing up and to the right of late? 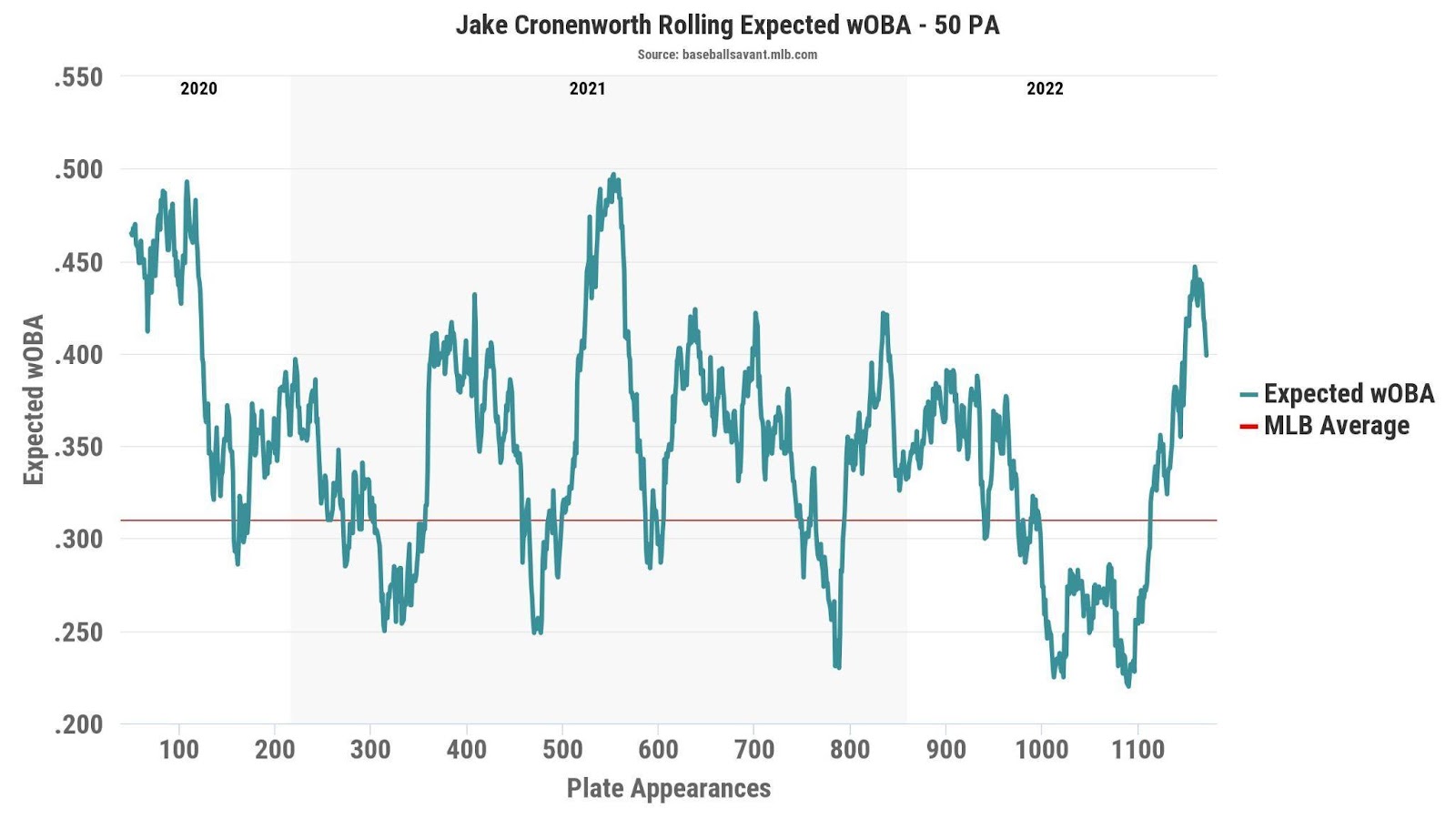 Let’s point to the easy things first. First off, he’s making harder contact and his average exit velocity is up. That’s a good thing just simply put without even looking into it even further. Beyond that, however, take a look at some of his metrics from April and May compared to the month of June:

The BABIP difference is insane, and the elevated strikeout rate was abnormal for Cronenworth. It’s still currently up at 19.2 percent, which is nearly four percentage points higher than his previous career, and up over five percent compared to his 14 percent mark last season. Less strikeouts, some harder contact, and a little bit of luck have fueled the fire to the Cronenworth turnaround. Remember, sometimes it’s better to be lucky than good.

Let’s dive into that strikeout rate a bit, because his mark in June is right on par with the past two years, but where he opened the year is quite the outlier. At first glance, for this year and the past couple of seasons as a whole, the numbers don’t look too alarming, in that he’s not leaving the zone anymore than past year, his contact rate is right on par, and his swinging strike rate has been as steady as they come during his time in the majors. However, when you look into it a bit more, you’ll notice that the numbers have returned closer to prior seasons because of this hot stretch he’s currently on. 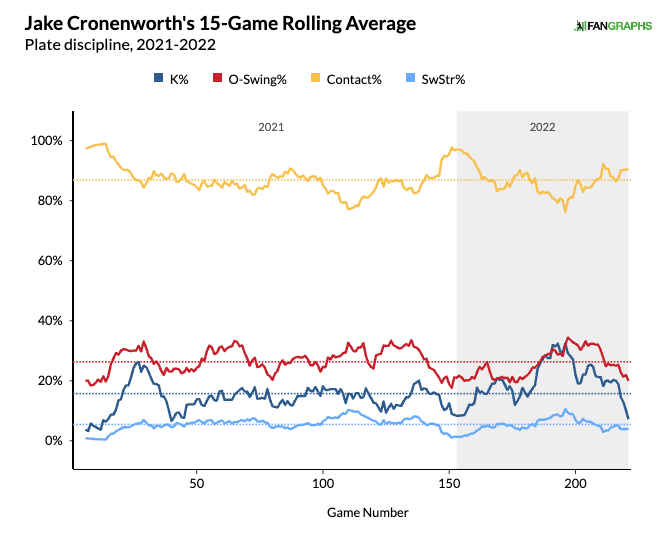 His contact rate compared to the end of last year dipped mightily to begin 2022, but that overall mark is trending up. Coincidentally, or perhaps not so coincidentally, his increasing contact rate over the past couple of weeks has resulted in a decreasing O-Swing rate, strikeout rate, and swinging strike rate. Coincidence? I think not!

Moving away from the deeper numbers and those in the peripheral view, just enjoy this production. He’s hitting .391 over his last 30 games, .397 over his last 15 games, and .379 over his last seven games. The slow start is a thing of the past and fantasy baseball managers should enjoy this production, even if it doesn’t include a home run barrage or stolen base parade. Furthermore, in the month of June, his 1.7 WAR leads all qualified players in Major League Baseball.

From a fantasy baseball perspective, it’s been nice for Cronenworth to get into a hot streak, and go back to doing what he does best for fantasy baseball managers. He’s likely not going to win you a league himself, but he’s a rock solid presence that will help your team’s batting average and provide some pop. Only one stolen base on one stolen base attempt this year is a bit disappointing, but if you were drafting him to be a key component of your stolen base production, then that was just a bit silly. He’s not someone I would be looking to trade at the moment, and given this hot streak, now probably isn’t the best time to trade for Cronenworth either.

Cronenworth is so valuable in reality to the Padres, and his multi-positional eligibility is just as great for fantasy baseball managers. The success he’s currently enjoying may not be sustainable over the course of the season, but by season's end, it should be another 20+ homer season with a .265+ batting average, and his counting stats should enjoy a little bump when Fernando Tatis Jr. returns to the field.