Justin Fensterman reacts to Week 11 in the NFL and gives you players whose stocks are on the rise or fall based on their performances. 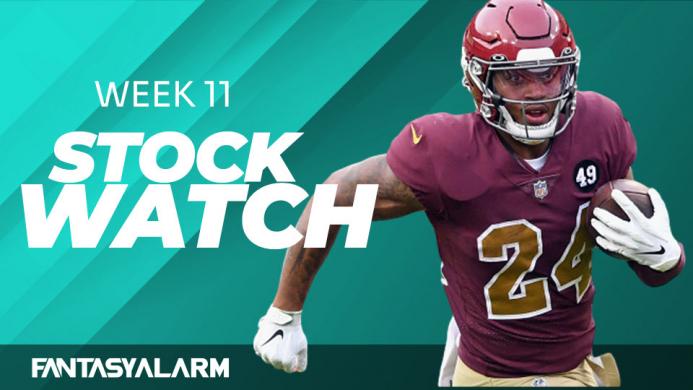 Just when we thought we were out of the woods with regard to crappy fantasy weeks, we get pulled right back into the sloppiness with a turnover-filled Week 11. Twenty-one quarterbacks (not including Jacoby Brissett or other random position players who threw the ball) committed a turnover, whether it was a fumble-lost or an interception. You also had players such as Michael Thomas , A.J. Brown and Tee Higgins dropping passes all day. You would have thought it was raining during every single game (not just in Cleveland) with the lack of control we witnessed. As always, there were a few sunspots in between the dark and stormy clouds. Deshaun Watson led all scorers, fantasy heroes Dalvin Cook and Travis Kelce  produced at a high level and Keenan Allen got in the endzone for the fourth-straight week. While one rookie, Justin Herbert, posted a top three fantasy performance among quarterbacks, another rookie, Joe Burrow, sadly tore his ACL and is lost for the season. No matter what blunders come our way, we'll continue to break every single one of them as we look to punch our tickets to the fantasy football playoffs.

L. Murray - RB
NO1
Latavius Murray (quad) is questionable for the Divisional Round against the Bucs.
Murray missed practice this week but was labeled as "day to day" by coach Sean Payton mid-week. He'll be a game-time call for Sunday. If he sits, Ty Montgomery could see some extra work behind Alvin Kamara, who would again be a threat for 25-plus touches.
Added 4:06 pm (EST)
Added 4:06 pm (EST)

D. Watson - QB
HOU1
Breaking his Twitter silence Friday, Deshaun Watson tweeted, "I was on 2 then I took it to 10."
It was Watson's first tweet of the new year, and one would have to assume it's referring to his frustration level in Houston. Watson was reportedly extremely irked at the Texans' process that led the team to hire Patriots exec Nick Caserio as its new GM. Watson was kept out of the loop in that hiring, and the Texans have been trying to perform damage control ever since, with CEO Cal McNair stating he wants Watson's input on the new head coach. It may be too little, too late in Watson's eyes. He's also said to be frustrated with the team's insensitivity to social justice. Former owner Bob McNair, who has since passed, was in hot water with racist comments a few years back. Watson could look to force his way out of town this offseason, but we would think there's long way to go until we get to that point.
Added 3:51 pm (EST)
Added 3:51 pm (EST)

V. Miller - LB
DEN
9 News Denver's Mike Klis reports Von Miller is "under criminal investigation" by Parker police in Colorado.
“We’re not commenting on nature of the allegations," said Parker police spokesman Josh Hans. "We haven’t completed the investigation.” That's all we have so far, as Klis has added nothing to the report at this point.
Added 2:41 pm (EST)
Added 2:41 pm (EST)

C. Edwards-Helaire - RB
KC1
Clyde Edwards-Helaire (hip) is questionable for the Divisional Round against the Browns.
CEH got in some practice reps this week, and coach Andy Reid said the Chiefs will take this thing up to game time to decide if the rookie back is ready to return after getting hurt in Week 15. He's had three weeks of rest, but the injury looked significant at the time, so it's no surprise Edwards-Helaire is still fighting it. If he sits, Le'Veon Bell and Darrel Williams will split duties.
Added 2:36 pm (EST)
Added 2:36 pm (EST)

S. Watkins - WR
KC1
Sammy Watkins (calf) is out for the Divisional Round against the Browns.
Watkins was injured in the Week 16 win, and the two weeks off still wasn't enough to get him ready. He didn't practice at all this week. It'll be Mecole Hardman, Demarcus Robinson, and Byron Pringle soaking up snaps behind Tyreek Hill.
Added 2:35 pm (EST)
Added 2:35 pm (EST)

R. Jones - RB
TB1
Bucs coach Bruce Arians said Ronald Jones (quad) will be a game-time decision for Sunday's Divisional Round matchup with the Saints.
Jones looked better at Friday's practice, but his status for Sunday's game is still up in the air. Even if he gets cleared, Leonard Fournette will start after rushing for 93 yards and a touchdown last week. Fournette's hot hand makes him the touch-favorite if both are active.
Added 12:37 pm (EST)
Added 12:37 pm (EST)