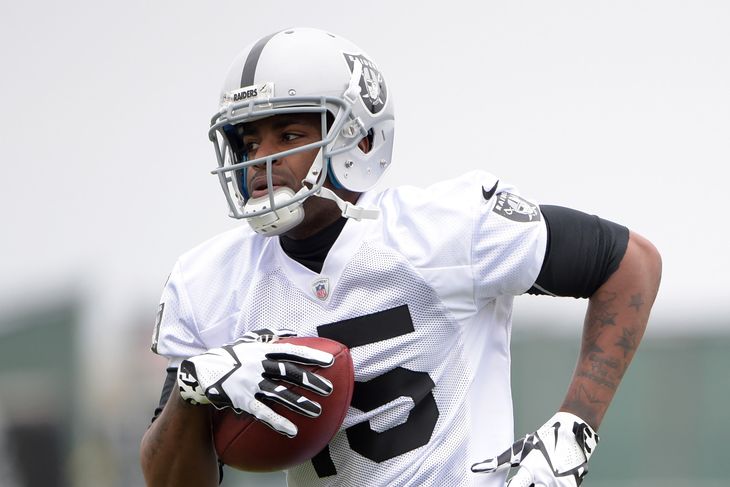 Here is the Training Camp Reports for Wednesday August 3rd:

I do not like drafting early. The NFL regular season is over a month away and thus I was quite surprised when our Program Director over at SiriusXM Fantasy Sports Radio Matt Deutsch told us the first Host League Draft would take place on August 3rd.

Nevertheless, I took part along with 11 of my fellow hosts and I drew the 11th pick. I am pretty happy with the way that the draft turned out but would really like to hear your feedback on how you think my draft went.

If I hear one more glowing review about Michael Crabtree’s first four days of training camp, I think that I may spontaneously burst into flames. Sure, Crabtree is highly motivated after having little to no interest from most NFL teams during the free agency period. And I wouldn’t doubt that he is making some real good plays early on in camp for the Raiders this year. Although the folks I trust close to the Raiders claim that he still looks slow.

As we all know, there are players every year that are said to be having “outstanding” training camps. Some of them like Marques Colston, Victor Cruz and Joique Bell turn out to be very productive fantasy players. Others, such as J.T. O’Sullivan, Marcus Mason and Deon Butler never quite make it when the lights go on.

When given an opportunity to draft a player that is said to be “having a great camp” I have a couple criteria. The first is that I still must be able to get that player at a value. I refuse to pay up for preseason performance no matter how enticing the player may be. The second is that I prefer my “camp cuties” to be younger players who are very talented but were either from a small school or just tested poorly at the combine. It is extraordinarily rare that a veteran player suddenly resurrects his career after a few good days at training camp.

Speaking of Raiders WR’s, it was two years ago that I was watching a preseason game between the Raiders and the Bears when I stood up out of my seat to get a better look at a player who just jumped off the screen. His name was Brice Butler and even though he was playing against backups in a meaningless preseason game, I simply knew that this kid was going to be something one day.

Well that one day has yet to arrive and Butler is still hanging around Raiders camp this summer. As usual, we are hearing great reports about him and that his freakish athletic ability is a matchup nightmare.

Then I came across this video of Butler manhandling a Raiders cornerback during drills on Saturday. I’ve watched this like 108 times already and am just shaking my head over this kids ability.

I am not saying that you should draft Brice Butler now in 12 team leagues but I think that you should all at least be aware of him. If he lands an opportunity either with the Raiders or with another club, he could wind up being an All-Pro one day and a legitimate fantasy producer as well.

When Is The Next Haley’s Comet?

It isn’t often that Patriots head coach Bill Belichick gives the media anything whatsoever concerning a player or a role that a player may play this season. That is why it was borderline creepy to hear him talk up second year RB James White this afternoon.

Belichick told members of the media that White was, “a quality guy, smart and team oriented” this afternoon. He went on to say that he believed that White is “a guy who can play on all three downs.” This is very high praise from a coach that usually keeps these things to himself.

I am very intrigued by White this year. The Patriots RB situation is up for grabs with only the suspended LeGarrett Blount guaranteed a role this season. I believe White is the perfect kind of late round RB selection this season especially for those in PPR leagues.

No Passing This Buc

Tampa Bay head coach Lovie Smith announced tonight that Doug Martin was the teams “lead RB” and that the team would be dedicated to the run in 2015. While all of that makes sense considering the team will be rolling with a rookie QB, it is surprising to hear an announcement to this end so early in camp.

Martin has averaged just 3.6 & 3.7 yards per carry over the past two years with a combined TD total of just three. This production was a far cry from Martin’s rookie season in 2012 where he rushed 319-1,454 and 11 TD’s. Again, folks are raving about Martin’s early camp production and the team says that they are very happy with his offseason work and dedication.

I still cannot get excited about Doug Martin in 2015. I fell for this last year and he burned me bad. When you are looking for a RB3 or RB4 in your draft this year I would recommend players like DeVonta Freeman, Tevin Coleman or Andre Ellington. In fact, I would rather take a real late shot on Charles Sims in a PPR league format instead of rolling with Doug Martin another year.