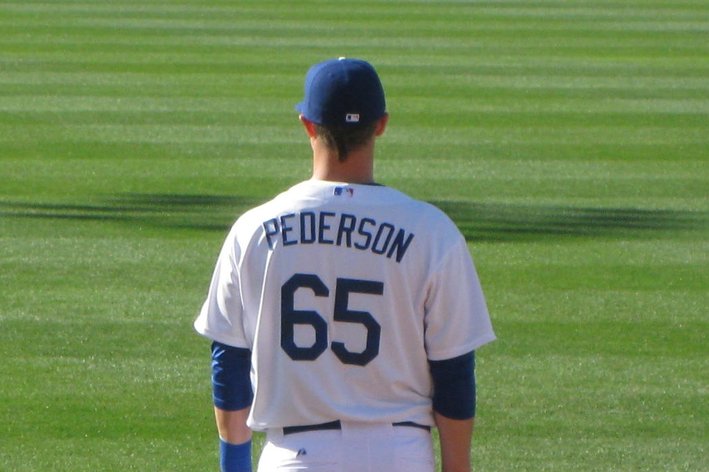 Joc Pederson, as his name suggests was born into a very athletic family. His Father actually played seven seasons in the Dodgers minor league system making it up to the big leagues for a brief stint in 1985. Joc’s Mother was an athletic trainer and one of his Brothers (Tyger) is a second baseman also in the Dodgers organization. Joc has been blessed with a tremendous amount of natural ability himself. While not a crazy athlete, Joc Pederson has great baseball skills. His patience at the plate and ability to adjust his approach even during an at bat is well beyond his years. Pederson likes to set up the opposing pitcher by moving around in the box and adjusting his swing during the course of a plate appearance.

He has great instincts in the outfield although he is not incredibly fast. He should be able to play center for at least a couple of years at the big league level until he fills out physically. His swing is a bit long and features an uptick which helps him generate flyballs but also leads to swings and misses. Pederson profiles as the type of player that will steal some bases early on in his career but won’t be in double digits come his late 20’s.

The biggest knock on Pederson was is ability to hit left handed pitching. He struggled mightily against southpaws early in his career to the tune of a .200/.296/.269 triple slash in 2013. The Dodgers coaches identified that Joc was coming off the ball against LHP and often stepping in the bucket. He did a wonderful job correcting this mistake in 2013 and finished with a .290/.415/.580 slash in 169 AB’s versus left handers in 2014. This is a prime example of the dedication Pederson has to the craft and why the Dodgers are poised to grant him a starting job in 2015.

The Dodgers still have a wealth of OF talent on their squad heading into 2015 but with Matt Kemp off to San Diego, the club fully expects Joc Pederson to take over in center field. Of course Andre Ethier is a very similar type of hitter to Pederson and may take away AB’s if the youngster doesn’t fare well against LHP or defend center field well.

If Pederson can do those two things well he will start out the season in the lower third of the Dodgers lineup on a consistent basis. If he is hitting seventh in the order he should see a decent amount of RBI opportunities but most importantly will have the green light to steal as much as he likes ahead of Juan Uribe and the pitcher spot in the lineup.

Despite the gaudy power numbers he threw up at triple-A Albuquerque (33 HR, 78 RBI), Pederson does not profile as a plus power hitter early in his career. A reasonable expectation for him if he can earn a the starting job would be 17-21 HR & 60-75 RBI to go along with 14+ steals on the season.

Carlos Gonzalez – A lot of similarities here between Cargo and Pederson. The power/speed combo is obvious but the patience at the dish and the swing are almost a spot on match.

Colby Rasmus – A very similar athlete and build, Pederson has a better makeup than Rasmus, although Rasmus had a very similar surge in power late in his minor league career.

Joc Pederson has an average draft position of 210.90 according to the National Fantasy Baseball Championship (NFBC).