Here is the Training Camp Report for Sunday August 4th:

It is a yearly tradition for the world to overreact to whatever happens in the first preseason game of the season. Based on early returns I would bet that Giants RB Andre Williams will get a 20-30 pick boost and maybe even more based on his performance against the Bills in the Hall Of Fame Game.

Listen, I like Andre Williams but the fact that he played so much last night isn’t a great sign that he will be the Giants primary backup to Rashad Jennings let alone a threat to Jennings carries. It was a great start to his career but please be careful to separate what does and does not matter in the preseason.

Ok so that was a terrible headline but get off of my back people. Broncos RB Montee Ball underwent an appendectomy this morning after feeling sick throughout the weekend. This will put him out until the end of August and potentially the beginning of September. Right now the Broncos are saying that they fully expect Ball to be ready to go by Week 1 but this is far for a certainty at this point.

I am always concerned over an athlete coming off of an appendectomy. I had one back when I was 18 years old that absolutely destroyed me. I remember being wiped out for months after the surgery and that was back when I was a three sport athlete with unlimited energy. Not that I am comparing Montee Ball to myself but just saying this is much worse in my mind to a hamstring pull.

Tennessee Titans OG Andy Levitre had his appendix removed on July 30th and is already back at practice so there is plenty of reason for optimism with Ball. But Levitre is a BEAST who doesn’t have to run the football 20+ times per game. For the short term I am holding Ball up in my rankings but if I don’t see him on the field within two weeks I will be concerned.

The End Of The Road

Giants RB David Wilson had a long road to pave to get back on the NFL playing field after significant neck surgery last year. He defied the odds for a bit but with one hit (a tiny one at that) in practice his career is now over.

The Giants placed Wilson on season ending IR and Wilson has issued a statement stating:

“I don’t want anybody to feel sorry for me, or pity me,” Wilson said. “I lived my dream. A lot of people only get to dream their dream. I lived that dream. Now I have a chance to dream another dream and live that, too.”

David Wilson’s story should remind everybody who plays in dynasty leagues that tomorrow is promised to no one. Football is a dangerous sport and playing fantasy football for anything other than the upcoming season is foolish. Those who win dynasty leagues play for this year and this year only. Yet, they seem to win year after year. It’s funny that more people don’t notice that trend and build their teams accordingly.

Seems like I can’t go a day without mentioning some weird story involving Texans RB Arian Foster. Today Foster mentioned that he considered retirement this offseason while recovering from back surgery. As if there weren’t more red flags surrounding Foster, I never trust a player who talks about retirement.

Players who think/talk about retirement usually already have one foot out the door. In my opinion, Foster will be out of football by this time next year.

I am not one of those tools that overreact to preseason depth charts. After 25 years playing fantasy football I’ve learned to read between the lines and cut out a lot of the bullshit propaganda that teams put out there. But it should be noted that the Rams have Kenny Britt as their primary “X” receiver right now and by the tone of training camp thus far that probably won’t change. Britt looks a lot faster early on than he has in years. We should remember that he is only 25 years old and despite all of the foot and knee injuries he is still in the prime of his career. He isn’t going to be the player he was before the ACL that is obvious but that’s not to say he can’t make a fantasy impact here in St. Louis. Those who listen to my show are probably freaked out at me saying this because I have been against Britt for years. But he’s in the perfect situation with the Rams, who have nobody to challenge him for targets. Britt is still not a top 36 fantasy WR but he is moving up even my rankings with each good practice.

The Raiders paid some real cash for free agent WR James Jones this offseason. But, Jones failed to crack the starting lineup according to the Raiders initial depth chart. Andre Holmes, who I have been gushing over since last summer is listed as the Raiders WR1 right now which does seem like reward for what has been an outstanding start to training camp. Holmes has size, speed and that downfield playmaking ability that guys like James Jones just don’t offer. The Raiders really do have a good WR corps. I love Holmes and Brice Butler while feel that guys like Rod Streater and James Jones are very good for moving the chains.

Also on the Raiders depth chart it has Maurice jones-Drew ahead of Darren McFadden as the teams starting RB. This is like having a favorite between Santa Claus and the Easter Bunny as neither is actually a good investment outside of the one day a year in which they matter.

The Lions have one of the better offenses in the NFL. They also have a below average conversion rate on third downs over the last three season and play in a domed stadium. All of this makes whoever is kicking for the Lions a solid fantasy option.

This summer the Lions are having a competition between Giorgio Tavecchio and seventh round pick Nate Freese. Most people including myself assume that the Lions will go with Freese since they have a draft pick invested in him but he has been getting his ass kicked by the undrafted second year man in Tavecchio.

All that I ask is for you not to be that guy who goes to his draft and takes David Akers or god forbid Jason Hanson as your kicker thinking that they are still the guy for the Lions.

One of my favorite late round prospects is out 6-8 weeks with a broken clavicle suffered at practice this morning. Chicago Bears WR Marquess Wilson is a big, fast target that was a superstar WR coming out of High School and early on at College at Washington State. At this point we have to see whether or not Wilson stays off of the PUP list which would require him to miss the first seven weeks of the season. For now, we’re going to have to pump our breaks on this sleeper train.

Jaguars RB Toby Gerhart missed practice today with tightness in his hip. Head coach Gus Bradley says that Gerhart’s absence was more of the team playing it safe with their presumed bell cow rather than the injury being significant. Still, this is one of the chief concerns about Gerhart as he has never carries a full load in more than two consecutive games let alone a full season. 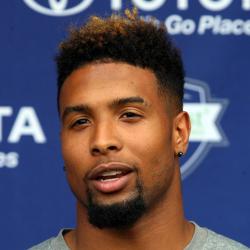