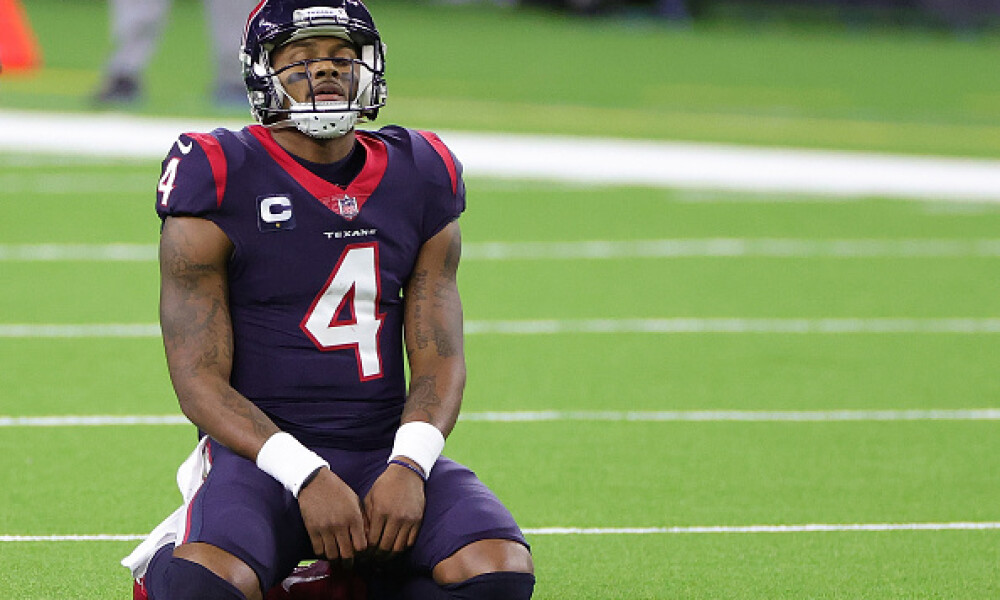 As if you haven’t already realized, having been bombarded with a bevy of news announcing the release of numerous fourth-string offensive tackles and third-rate wide receivers who spent the past several weeks running with the threes and fours, it’s NFL Cut Day today. By 4pm ET, all 32 teams will have pared down their rosters to the 53-man maximum and we are ready to head into Week 1 of the regular season. Sort of. You’ll still see some movement as teams begin to sift through the rubble and make a few last-minute roster tweaks, but for the most part, fantasy football players will have a finalized player pool to head into drafts with for the next two weeks. While each team continues to figure things out, there are obviously some other news items we should be addressing.

What’s Up with Watson?

Will Deshaun Watson play in the NFL this season? This seems to be the question on everyone’s mind and the story’s clarity is just as murky today as it’s been all summer. The rumor mill fired back up on Monday when news broke of a potential agreement between the Texans and Dolphins, but as of Tuesday morning, there has been zero movement. The Fins cut linebacker Benardrick McKinney which freed up some cap space, but that hardly seems like the catalyst needed to move the trade forward.

The Texans have said they are willing to keep Watson on their roster and designate him as a healthy scratch all season, but that might cause a dust-up with the players’ union as the current CBA does not allow deactivation for any significant time period for conduct disciplinary-related issues. If Watson were to file a grievance and win, it could cost the Texans a weekly roster spot. However, given his trade demands, Watson may not want to stir up that hornets’ nest in the hopes of making it easier to find a willing trade partner.

But even with all of this, there are still the legal ramifications in play. A new team acquiring Watson for the king’s ransom the Texans are still demanding may still not want to endure the risk should the much-maligned quarterback be found guilty. So as I said earlier – clear as mud, right?

Listen, if you’re drafting between now and the start of the regular season, you should already understand the risk involved with rostering Watson. We’ve watched his ADP spike at times as the rollercoaster takes us all over the place, but we are just as far from resolution today as we were two months ago. My personal philosophy has always been to let this be someone else’s headache. Yes, the ceiling for Watson is ridiculous and getting him with a late-round pick is awesome IF he plays. But with no guarantee and a huge mess to wade through to get to the point of him actually playing, you’re better off building your bench depth in other ways.

Trey Lance truthers hit a bit of an obstacle Monday when it was announced that the 49ers rookie quarterback will be sidelined for at least a week with a chip in one of his fingers. Which finger? Kyle Shanahan isn’t saying. But what we do know is this definitely hurts his chances of having a prominent role in Week 1. If the injury isn’t serious, there is still an outside chance, given the season is two weeks away, but if you were expecting Lance to be your Week 1 starting quarterback in fantasy, it’s time to activate your back-up plan. Even with Detroit on the horizon, the 49ers aren’t going to risk starting a banged-up Lance when they have a healthy Jimmy Garoppolo standing right there.

Giants Beef Up the Offensive Line

With cut day looming, the Bengals opted to get a little something for what they perceived as a whole lot of nothing. Former 2018 first-round center Billy Price has been shipped off to the Giants in exchange for defensive lineman B.J. Hill and a conditional seventh-round pick. Not exactly a haul which should tell you how down on Price the Bengals actually were. He lost his starting job last year, did very little to impress in camp this summer and could very well have been on today’s cut list. The fact that Price played guard in in college should help his cause as a potential back-up for the Giants as versatility on the o-line is always key. But don’t get too excited, Giants fans. Price has a very long way to go before he can be considered a viable help to the line.

It looks like we’ve got another potential COVID outbreak in Indianapolis as a staff member tested positive and QB Carson Wentz, WR Zach Pascal and C Ryan Kelly were all deemed close contacts. Players who are not vaccinated must remain away from the team for at least five days, even if they are only deemed a close contact which will, again, stir up the debate between vaccinated and unvaccinated players and whether fantasy owners should downgrade certain players they learn to be unvaccinated. If you’ve drafted Wentz, you have to be prepared for him to miss time throughout the year should he not opt for the shot. It’s not a matter of whether you believe in the vaccine or not at this point. This is strictly about your fantasy team. If Wentz is your back-up and he is deemed a close contact the week you’re supposed to use him, what are you going to do, especially if you’re playing in a deeper league or a 12-teamer where people are hoarding quarterbacks. You need to keep yourself protected.

By now, you’ve already heard the news that the Patriots have released quarterback Cam Newton. Another unvaccinated quarterback, Newton missed this past week after being deemed a close contact and it looks like that was all the edge Mac Jones needed. Stay tuned for further analysis from Andrew Cooper, but in the meantime, some other interesting names currently on the unemployed list include: Devonta Freeman (I’m sure he’ll soon be linked to Baltimore like every free agent has-been), RB Darwin Thompsons, RB Peyton Barber, WR KeeSean Johnson, WR Seth Williams, TE Ryan Izzo and TE Jacob Hollister.

Back to vacation! Bender out!