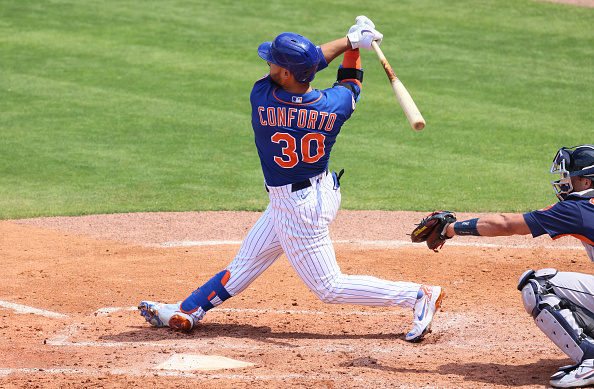 Shortened season results come with a grain of salt. Michael Conforto finished with a robust .322/.412/.515 slash line becoming the fourth player in team history to finish with a batting average of .300 or better, a 40 percent or higher on-base percentage and a slugging percent of at least .500 in a season. Part of his batting average growth occurred in his splits:

Conforto versus RHP: .344 average (fifth in the majors) with a .960 on-base plus slugging percentage (OPS)

Conforto ranked among the National League leaders in the following categories:

On the surface, it appears he traded some power for contact and average during the shortened season. Conforto's isolated power dropped to .193 while his weighted on-base average spiked to .401. It also resonates in his Z-Contact (in the strike zone) percentage rising by five points to 86.8 percent.

Transitioning to Statcast, Conforto recorded 145 batted ball events with 16 barrels (11 percent), an 88.4 MPH average exit velocity and a 36.6 hard hit rate. While his slash lines appear terrific, the expected numbers suggest some migration to the mean going forward evidenced by the expected statistics: 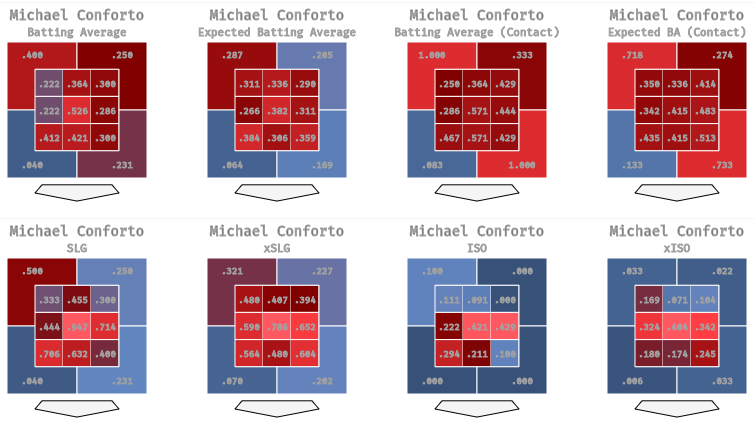 Encouraging signs emerged in Conforto's approach on Statcast. Despite his zone swing percentage decreasing his zone contact rate rose by 4.5 points to 83.4 percent. Other indicators remained steady in terms of swing percentage and whiff rates.

Part of less home runs lied in more ground balls within the batted ball data. Conforto generated a ground ball percentage of 41.4 while hitting fewer fly balls (down almost 12 percentage points) but a spike in line drive rate to an outlier level of 34.5 percent, seven points above his career average. It's tough to project Conforto to hit at or above .300 over a full season knowing numbers like this regress to the mean. Especially when exit velocity, hard hit percentage and barrel rates all declined.

In an effort to expand his sample size, here's Conforto's numbers from the start of the second half of 2019 through and including last year:

During this time frame, the power fantasy players crave from his surfaced which coincides with his second half breakout from 2019. Either he carries over these gains or as implied above, correction may be looming.

Over the last three years, check out Conforto's results before assessing his projection sets:

When seeing his price point in drafts, going to align with THE BAT X in terms of power production but Conforto can hit in the .275-to-.285 range in 2021. Just do not pay for the career year slash lines from 2020 when targeting him in upcoming drafts and auctions.

THE BAT X and THE BAT courtesy of Derek Carty