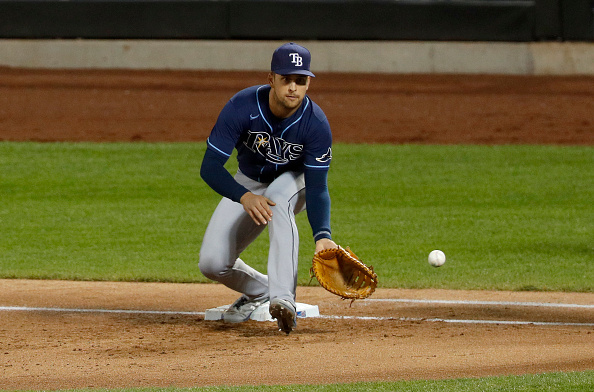 Suggesting the Hot Stove could use some embers would be an understatement. A slow moving free agent market while teams suggest financial losses from the truncated 2020 season align with a potential further chasm in the haves and have-nots in 2021. Add in posturing by both the owners and the MLB Players Association leading to a potential lockout in the midst of a pandemic does not provide a warm fuzzy.

However, during the Rule Five draft this afternoon, some players received a chance to stick with a major league team and other players may receive a clearer path to playing time in the minor league portion of the draft. Plus, a trade occurred between Tampa Bay and Texas:

Source: The Rays are trading 1B Nate Lowe to the Rangers. Hearing C/OF Heriberto Hernandez is the primary piece going back to Tampa Bay. Additional prospects are involved in the deal.

Many in the fantasy community hoped for the power upside and past plate discipline displayed by Nate Lowe in the minors would translate to major league production. It’s happened in spurts but not over a prolonged stretch in the majors. His progress in Texas may define this trade along with the Rays mining more prospects to line up more talent in an already stacked system.

Lowe to the Rangers

Starting with his 2020 season, Lowe played in 21 games accruing 76 plate appearances with 10 runs, four home runs, 11 RBI, a stolen base and a .224/.316/.433 slash line. More concerning than his reduced slash numbers compared to his 2019 debut, Lowe’s strikeout percentage spiked to 36.8 percent in this limited sample with an 11.8 walk rate. This contrasts his strong discipline displayed in the minor leagues. Perhaps rust and no minor league season contributed to his struggles but it cannot be overlooked.

Lowe’s breakout in 2018 included his traversing three levels starting in High-A, moving up to Double-A and finishing the year in Triple-A. His overall numbers from the three levels yielded a robust .330/.416/.568 slash with 32 doubles, 27 home runs and 102 RBI over 130 total games. He also owned a 12.3 walk percentage and 16.2 strikeout rate. Although Lowe scuffled against the pitching in Triple-A hitting .260 with a 24.5 strikeout percentage. Repeating the level in 2019 showed promise with Lowe reducing his strikeout percentage by 4.3 points and raising his walk rate by over 10 percentage points.

In fact, Lowe displayed growth when repeating a level both times (High-A, Triple-A) in his accent to the majors with his first backslide in discipline taking place this season. In 2019, Lowe recorded a strikeout percentage of 30 which rose to last season’s 36.8 percent. He did show a gain in walk rate from 7.7 percent over 169 plate appearances to 2020’s 11.8 percent in a smaller sample.

What keeps Lowe on the fantasy radar, his Statcast data and power upside. Across his major league career, Lowe’s logged 245 plate appearances with a .251/.322/.447 slash in them. Of his 143 batted ball events, Lowe’s produced 17 barrels (11.9 barrel percentage), 64 hard hit events (exit velocity of 95 MPH or better) and a 44.8 hard hit percentage. His Sweet Spot percentage of 38.5 sits six points above league average and his hard hit rate just under 10 points over the league rate. When Lowe squared up a baseball, it can leave any ballpark as evidenced by his four no-doubt home runs of his 11 career home runs in the majors. Before delving into his batted ball data, here’s all of Lowe’s line drives and fly balls during his time in Tampa Bay with the new Texas ballpark as the backdrop:

Armed with an expected batting average of .252, a .439 expected weighted batting average on contact (xwoBACON) and .436 expected slugging, Lowe could take a step forward in his development in 2021. But, he will not be a sleeper since so many pundits awaited a clear path to playing time the last two seasons. How Lowe fares against fastballs may decide his fate between a power hitting first baseman with improved discipline versus being a platoon hitter at the major league level.

Referencing his spray chart, it’s also intriguing he hit more home runs to the left side of center field than the right, his pull side. Hence the question on his bat speed being able to hit fastballs with proficiency. Check out his numbers against fastballs in each of his first two major league samples:

Delving into his splits against pitchers in the minors Lowe held his own versus left-handed pitchers, especially in on-base percentage while his power receded. Still, it provides hope for his future if these gains can be carried over:

Using a sliding scale to try and predict his outcomes in 2021 comes with some inherent risk due to how Lowe prepares this off-season along with can he improve upon his plate discipline metrics to cash in on his Statcast potential. Key on his performance in spring, especially against major league pitching before paying full retail on Lowe as a corner infielder this season. There’s a possibility he exceeds this ZiPS projection:

However, he could also be overwhelmed by fastballs and advanced scouting morphing into a platoon first baseman as the season progresses. Verdict, too soon to call but there’s enough to warrant interest in the upcoming season depending on the draft capital it takes to roster Lowe. But at least the Rangers will find out:

The Rangers say Nate Lowe is expected to be the first baseman over Ronald Guzman for 2021.

Keeping with the organizational modus operandi, Tampa Bay traded a blocked prospect at possibly his peak value to reload for the future.

#Rays Neander said Hernandez was the primary piece of return from #Rangers, and though several years away has the chance to develop into a special bat. Said they see all 3 as potential big leaguers

About to turn 21, Heriberto Hernandez headlines this deal with the potential to develop into a very good hitter. Whether or not he can stay at catcher remains to be seen, but in the present major league climate, even if Hernandez can log 10 games at the position once he arrives in the majors, it adds to his value. For a glimpse of his swing:

Be sure to stay with Fantasy Alarm to remain ahead of the competition across all fantasy formats. Also be on the lookout for a podcast soon with our prospect guru Matt Selz covering the Rule Five draft and non-tenders like David Dahl on the search of a new franchise:

Until next time, stay safe and be well.