KBO Round Up: June 6 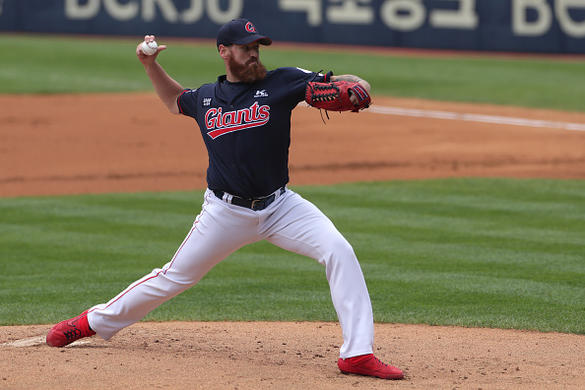 An exciting slate of games on Saturday included three walk-off victories. It started with Doosan breaking a tied game in the bottom of the ninth thanks to a single by Jae-ho Kim:

Doosan moved into second place after winning its third in a row. Some bad news for the Bears losing a starter to the injured list:

Jae-won Oh of the #DoosanBears suffered a right hamstring injury yesterday and ended up on the injured list. He is scheduled to have a thorough checkup on Monday. So Yeil Seo came up today. pic.twitter.com/hSMses3jsa

As noted in an earlier column covering the KBO, soft tissue injuries continue to pile up after shortening spring training then going to live games, something the MLB needs to monitor if it returns to games this year. During a pitching duel in Lotte, the Giants scored the game’s only run in the bottom of the ninth courtesy of a single by Lu-han Kang. Kiwoom won its fifth straight game despite starting the bottom of the ninth down by one but rallied for two runs with the game winner a double by Byun-woo Jeon. This puts the Heroes a half-game behind the LG Twins for third place in the league.

With the NC Dinos winning another lopsided game against Hanwha, changes could be coming for the struggling franchise. Losing 13 consecutive contests does not bode well for a manager in the last year of his contract and it appears the team will turn over some of the coaching staff:

Saturday’s games featured some strong pitching performances so this will reflect in the recaps in today’s Round Up. Here’s the top performances from the five contests.

Southpaw Chang-mo Koo of the NC Dinos won his fifth game tossing six innings giving up eight hits, one earned run, and striking out six. He’s gaining more interest daily on social media due to his strong start to the season and getting swings and misses like this:

Knew I stayed up for a reason. pic.twitter.com/bzqKYtOmb9

During a no-decision, Dan Straily logged seven shutout innings yielding five hits with six strikeouts. He’s second in the KBO with 43 strikeouts and lowered his ERA to 2.23 through 40.1 innings as a result of this outing. Opposing Straily, Je-seong Bae of the KT Wiz threw eight shutout frames allowing three hits and three walks with four strikeouts dropping his ERA to 2.11 on the season.

Tyler Wilson of the LG Twins worked 6.1 innings giving up six hits, two earned runs, and a walk with six strikeouts in a no-decision against Kiwoom.

Once again pacing the Dinos offense, hit machine Jin-sung Kang homered for the second straight game during a 3-for-4 day at the dish with two runs, a double and two RBI. Here’s his blast in Hanwha:

Kang has appeared in 25 games, and with the two RBI has 25 RBI this season in 88 plate appearances. He also qualifies for the hitting categories and leads the league in every slash line category (.459/.517/.838) making him one of the biggest breakout stories early on this season. His teammates also chipped in during the Dinos 14-2 rout:

Sunday’s slate features some hot teams and not the best set of pitchers. It could be a wild day for bullpens so stay tuned for more KBO action with a day off on Monday looming. Under immense pressure, Hanwha will try to snap its 13-game losing skid hosting the NC Dinos. Kiwoom looks for its sixth straight win and would leapfrog the LG Twins if they accomplish it. Be sure to stay with Fantasy Alarm to remain ahead of the competition across all fantasy formats. Especially with a NASCAR race on tap (check out Matt Selz and Dan Malin’s work), an MMA fight night with Mike Alexander covering the action and Sean Mitchell’s playbook for CS:GO contests.