Greg Jewett breaks down the top plays and values for your KBO DFS lineup builds. 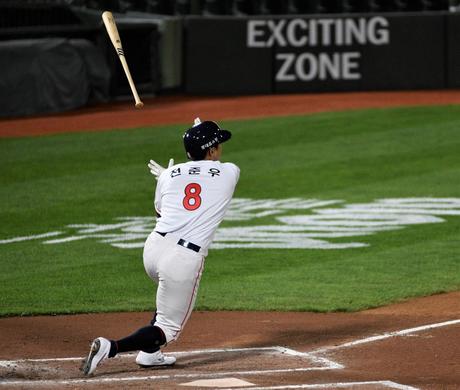 It appears the weather will not be headlining the news before lineup lock at 1 a.m. EST Sunday morning. Our fans on the west coast can be wide awake in comparison with lock on Draft Kings at 10 p.m. Saturday evening. No matter where you reside, unless it’s New York or Iowa where KBO DFS remains unavailable, today’s targets will be covered so enjoy the write-up. Readers can hit me up on Twitter @gjewett9 or in the KBO chat later this evening on Fantasy Alarm.

Different strokes for different folks, today’s slate will be covered by game with an eye on the DFS prize.

In a game with two imports on the mound, this could be a lower scoring affair. Hanwha sends Warwick Saupold ($9.1K on DK) to the bump coming off a complete game shutout on Opening Day. Saupold owns a 0.33 WHIP with two strikeouts versus one walk but with the boost in price and lack of strikeouts represents risk in this slate. Kiwoom counters with Jake Brigham ($8.5K on DK). Brigham only tossed three innings his first outing yielding two hits and two walks with two strikeouts allowing no earned runs. Brigham could reach five innings but needs efficiency. Since these two starters could offset each other, they do not rank highly in this slate.

It’s been a rough visit to Samsung so far for Kia losing two games by a combined 17 runs (19-2). Hyun Jong Yang ($9.5K on DK)  takes the mound for the Tigers. Kia hopes he rebounds towards his 2019 form when Yang went 16-8 with a 2.29 ERA and 163 strikeouts in 184.2 innings. His first outing did not go well with Yang only lasting three innings giving up four earned runs on four hits and two walks. At this price, Yang’s a tournament play only.

Samsung sends Jung Hyun Baek ($6.5K on DK) to the bump, another southpaw. Baek also owns a less than optimal ERA (6.00) this season but went six innings his first outing with five strikeouts against one walk. Same deal as Yang, use Baek in tournaments and if the Lions stay hot at the plate, he could garner the win.

Lining up Doosan batters could be worthwhile so could using Yong Chan Lee ($8.7K on DK) as a pitcher in cash games. Lee turned in 14 quality starts last year with a 7-10 record and a 4.07 ERA but with only 102 strikeouts in them. His lack of strikeouts caps upside in a tournament lineup, especially at his price. Opposing Lee, Min Kim of the Wiz. Kim went 6-12 last year with a 4.96 ERA and 1.59 WHIP allowing 16 home runs. With Doosan heavy favorites, they will be a popular stack.

Courtesy of the rainout, the over/under adjusted to 9.5 runs on Fanduel plus the Twins get to put Casey Kelley ($8K on DK) into action after missing the opening series due to quarantine rules. Kelley went 14-12 last year in the KBO with a 2.55 ERA, 1.14 WHIP and 126:41 K:BB over 180.1 innings of work. Part of his success lied in depressing home runs yielding only seven last season. There’s no report on how long Kelley will work in this contest clouding his price tag along with the low strikeout total.

Opposing him for the Dinos, Young Gyu Kim ($4K on DK) makes for a very intriguing dart in tournament play. Kim only made 10 starts of his 30 appearances last season but past results never tell the full story. During his last start of 2019, Kim fired a seven hit shutout striking out eight. Due to the potential volatility, Kim’s best left for GPP’s but if the Dinos remain undefeated may pay off for the risk averse.

Saturday’s postponement lets the Giants sit their fifth starter and get Dan Straily ($6.7K on DK) back on the mound. Straily did not win his debut but whiffed four batters during 5.2 innings while issuing three walks. Versus the Wyverns, Straily could be in line for a win plus 5-to-7 strikeouts making him a bargain at his price point. The SK Wyverns counter with Tae Hoon Kim ($6.8K on DK) on Sunday. Kim’s only logged four starts among his career 132 KBO appearances the last two years.

In deference to James Grande, the Orion’s Belt portion looks at Doosan and Lotte as the two most likely teams to stack with the Kia Tigers being below the radar for GPP’s.

With lineups posted around 11 p.m. EST, I will be in the chat to update any questions along with more information in regards to the weather. Best of luck and be sure to stay with Fantasy Alarm to remain ahead of the competition.