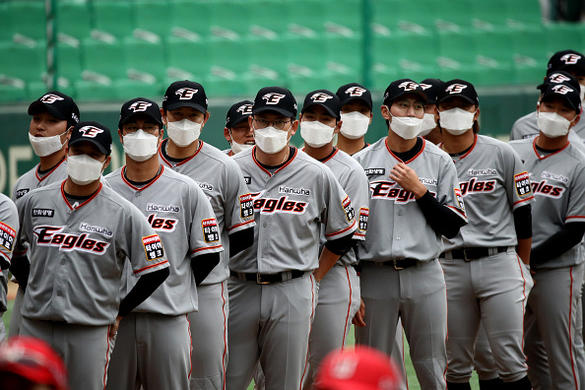 Saturday’s slate featured rain with three of the five KBO contests postponed. Of course, rain affects a schedule differently and at least team stands to benefit:

#LotteGiants will skip Won-sam Jang and will start @danstraily67 tomorrow. Today’s rainout is allowing Giants to skip their 5th starter while giving much needed rest to their bullpen. Things are clicking for the undefeated Giants. #KBODK pic.twitter.com/SuEkJScBQP

When preparing for DFS on Sunday, keep this tidbit in mind with Dan Straily heading to the mound for the undefeated Lotte Giants. In an effort to update the immersion into the KBO, check out this view from today:

Although weather stole the spotlight on Saturday, it cannot shroud the controversy with umpires so far in the KBO:

Umpiring has been terrible so far this season. Ha-seong Kim is called out on a pitch that WAY OFF the plate. There were 2 runners in scoring position.

Not sure if #KBO can continue to demote umpires, but frustration is boiling. #KBODK pic.twitter.com/9SwAXNllPP

One umpiring crew has already been demoted to the KBO minor leagues after the opening series earlier this week and games continue to occur with animated frustration by pitchers, hitters and managers. It will be worth watching going forward. Imagine the MLB sending down Angel Hernandez after a rough three game stretch, of course many major league players may agree with this process but it’s a slippery slope.

As for the games on Saturday, the Kiwoom Heroes notched their fourth win with a 5-3 win over Hanwha while the Samsung Lions exploded for 14 runs on 13 hits in a 14-2 win against the struggling Kia Tigers. It’s early in the season but pressure seems to be mounting on one import in particular:

Matt Williams’ #KiaTigers are off to a real slow start at they fall 1-4 for the season. Next couple of games will be very important. It’s only been 5 games, but when u are managing the most popular team in league, pressure can amount quickly. #KBO #KBODK

Due to only two games being played, the players notes will be a bit more streamlined but with pertinent information.

In a no-decision, Ee-whan Kim of the Hanwha Eagles left with a lead which dissolved in the bottom of the sixth by his bullpen. Kim threw 91 pitches in five innings giving up two hits, one earned run, four walks and struck out four yielding the fewest earned runs by any starter on Saturday.

Targeting players from Samsung made sense on Saturday due to playing in a dome. Tae-in Won logged five innings en route to his first win of 2020 yielding six hits, two earned runs and three walks with two strikeouts during the Lions lopsided victory.

Noting the Samsung home park favors hitters, the Lions finally broke out scoring 14 runs on 13 hits. While the offense featured hits up and down the lineup, here’s the two players of interest from Saturday:

Song Kwang-min wasted no time during this AB and jumped of the 1st pitch that he saw for a solo shot to left. This was Song's 2nd HR of the season. #KBO #HanwhaEagles pic.twitter.com/MsyRG8UaLE

Being one of the only live events available for consumption, the KBO continues to draw in fans for live baseball. This can be seen in this article:

For love of the game: with KBO on ESPN, American fans happy to watch live baseball https://t.co/7xQQMDECR8

As projected pitchers get announced, the DFS slate for the KBO will be updated by yours truly later giving James Grande the night off.