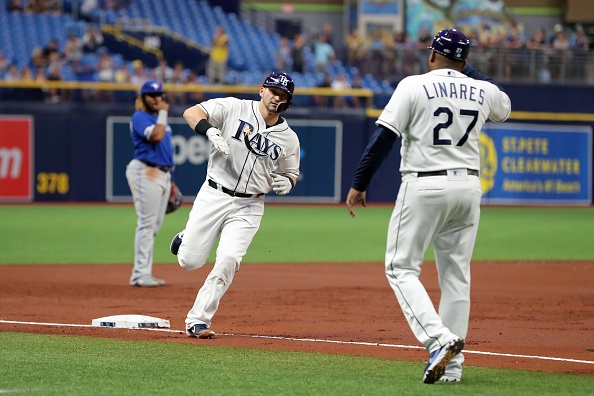 Although the hot stove’s yet to yield a signing of a big name free agent like Gerrit Cole or Anthony Rendon , catchers continue to take priority for teams this winter. Travis d’Arnaud agreed to a two-year deal with Atlanta to reprise the role which fueled Kurt Suzuki ’s success paired with Tyler Flowers . Stephen Vogt returned with 10 home runs in 2019 and signed a one-year contract with Arizona to backup Carson Kelly giving the Diamondbacks a very solid tandem for 2020. After losing out on d’Arnaud, Tampa Bay settled with Mike Zunino avoiding arbitration on a one-year contract as well. Now, time for the fantasy ramifications of each transaction.

It’s easy to overlook veterans with a propensity to injuries. Last year, Travis d’Arnaud not only flew below fantasy radars, he ended up being released by the Mets. Tampa Bay took a chance on d’Arnaud and he responded with 16 home runs in 351 at-bats with a .251/.312/.433 slash line. But, d’Arnaud’s second half .268/.329/.459 line with 10 home runs in only 209 at-bats gets shrouded by how fantasy owners view him. Poised to be a breakout player in 2018, d’Arnaud only appeared in four games putting him in fantasy purgatory.

However, when viewing his numbers on Statcast along with his back-to-back full seasons of 16 home runs in each of 2017 along with last year, d’Arnaud could be better than he’s perceived. First, here’s his spray chart from both 2017 and 2019 with all of his line drives and fly balls courtesy of Statcast with Atlanta as the backdrop:

d’Arnaud’s average exit velocity of 90 MPH last year comes with a boost to a 14.6 degree launch angle. Of more importance, d’Arnaud’s expected batting average of .262 and his .455 expected slugging percentage sit above his actual numbers. Remember, he’s heading to Atlanta which will benefit his power compared to Tampa Bay. d’Arnaud played in the National League and in this division for most of his career, so adjusting to a new league will not be a problem.

Armed with an expected slugging percentage 55 points higher than his actual, could d’Arnaud be a wide open sleeper? Time will tell. His slugging rate of .438 for 2017 and 2019 over 699 at-bats proves respectable at his position. During this time, d’Arnaud averaged a home run every 21.84 at-bats. Kurt Suzuki appeared in 105 games in 2018 accruing 388 plate appearances. If d’Arnaud can stay healthy, this seems like a template for his 2020 season. Using his home runs per at-bats above, this translates to his usual 16 home run pace repeated in both 2017 and 2019. Without knowing what type of baseball will be deployed in the season ahead, planning on a .250-ish average with 15-to-18 home runs this year seems likely for d’Arnaud. With some migration to the mean, d’Arnaud could pop 18-to-20, but do not plan on much more.

Travis d’Arnaud will not be a sexy pick in drafts for 2020, but he’s a solid catcher in two catcher formats with some risk due to his injury past. Also, in terms of counting statistics, Braves seventh hitters scored 74 runs with 91 RBI in 581 at-bats while the eighth hitters crossed the plate 76 times while driving in 81, so his slot in the lineup should not depress his runs or RBI appreciably. d’Arnaud’s a solid floor with potential for a repeat or a little better year than 2019, hence he’s sneaky since he will be overlooked.

Although Stephen Vogt signing with the Diamondbacks will be more fantasy worthy for those in league-only formats, there’s still some potential here. Vogt also bounced back in 2019 hitting 10 home runs in only 255 at-bats with a respectable .263/.314/.490 slash line with the Giants. Knowing how San Francisco depresses power, this will be important to remember. Vogt finished with a 48.7 fly ball percentage and 24.4 line drive rate last year. He traded some plate discipline for power but still hit with a decent average.

According to Statcast, Vogt owned a .254 expected batting average and .487 expected slugging percentage with a 41.1 percent hard hit rate. Vogt also increased his launch angle to 22.4 degrees in 2019, over seven percent higher than 2017. Moving to Arizona, it’s possible Vogt could get a couple of more home runs. Here’s his spray chart from 2017 and 2019 of all line drives along with fly balls with Arizona as the background:

Knowing the Diamondbacks will be using Carson Kelly as their primary catcher, Vogt will be more valuable to deeper leagues. However, in head-to-head leagues with daily transactions, a Kelly and Vogt combination will be available later on and valuable. In fact, this would be a highly recommended pairing in such a format. As a second catcher in 15-team league without hurting average, there’s room for Vogt to hit double digit home runs with an average in the .250-to-.260 range. Plan accordingly.

Mike Zunino stays by the Bay

Losing out on Travis d’Arnaud, the Rays decided to sign Mike Zunino to handle its staff. Fantasy owners realize it’s time to stop chasing the ghost of Zunino’s 2017 season. Last year, Zunino cratered to a .165/.232/.312 slash line hitting only nine home runs in 266 at-bats. He’s been unable to improve his plate discipline racking up another season with a strikeout percentage over 30 percent. For fantasy owners who try to protect their team batting average, Zunino should not be on your radar. Let someone else absorb his numbers.