**FREE PREVIEW** Greg Jewett dives deep into the numbers to let fantasy baseball owners know what to expect from the Washington Nationals' right-hander during the 2019 MLB season. 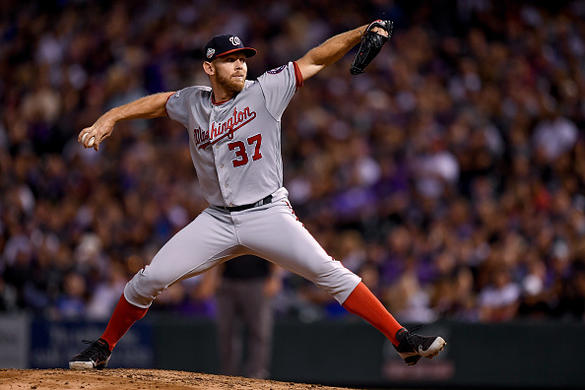 Chasing upside leads fantasy owners back to Stephen Strasburg each season. However, injuries and performance provide mixed results in regards to return on investment. Last year, Strasburg won 10 of his 22 starts with 156 strikeouts in 130 innings. His ERA of 3.74 accompanied an xFIP of 3.28 and 1.20 WHIP. At a time when innings by starters continues to decline, should Strasburg still be the 18th starter taken in NFBC drafts since the new year?

Last year, after another trip to the disabled list, Strasburg struggled in the second half. He only accrued 49.1 innings after the break but with a 4.20 ERA, 3.73 xFIP and 1.38 WHIP. Strasburg walked as many in the second half as he did in his 80.2 innings prior to the break. Working with reduced velocity, Strasburg nibbled instead of attacking hitters: 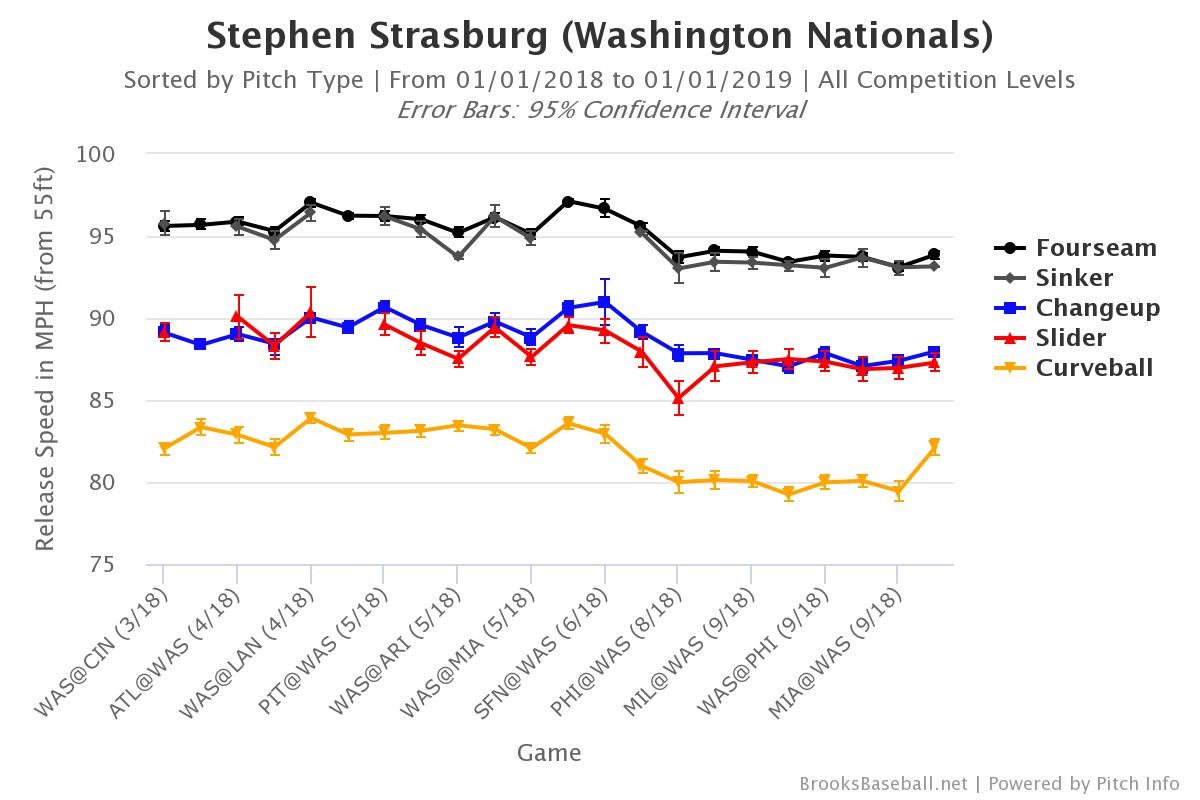 Given his propensity to injury, weighing an early draft pick on Strasburg comes with great risk. Here’s his disabled list chart courtesy of ProSportsTransactions.com:

Not only did Strasburg struggle in the second half, he yielded his highest exit velocity allowed of 88.4 MPH last year. Using his xSTATS, Strasburg’s kwFIP of 3.28 does provide hope, but with a .300 expected on-base average. There’s no way to predict his velocities for 2019, so tracking his fastball in spring will be important.

It’s also intriguing to see how effective his change up can be but he’s never used it more than 20 percent in any season of his career. Last year, Strasburg’s change generated a 19.87 swinging strike percentage, almost four-percent above league average. He also mixed in the slider more to accompany his curve. Strasburg’s curve produced a 19.5 swinging strike percentage, which sits well above the league average of 13 percent.

If Strasburg’s fastball velocity does not rebound, throwing more changeups and curves could offset it. But, as noted, he’s relied more on working off of his fastball despite its sometimes ineffectiveness. Here’s a look at his pitch arsenal courtesy of Baseball Savant:

As illustrated above, throwing his four-seamer up in the zone while burying his change, slider and curve will allow Strasburg to rack up strikeouts. Health casts a shadow of doubt. Here’s Strasburg’s projections from three different systems:

Strasburg’s eclipsed 150 innings once since 2015, with 175.1 innings in 2017. When healthy, he can produce wins, strikeouts and effective ratio statistics. Ultimately, velocity and pitch usage make him an alluring target in drafts.

However, seeing how Max Scherzer reacted when Strasburg took himself out of a start last year along with the articles questioning his toughness, it must be weighed when drafting him. Ideally, Strasburg makes for a starting pitcher two with starting pitcher one upside in fantasy. He’s not proven to be durable nor deployed his best pitch nearly enough. There’s time for Strasburg to adjust, but paying for a career year at age 30 seems precarious.

Use last year as his baseline with his three-year averages and projections as his upside. Stephen Strasburg represents the ultimate risk versus reward candidate. Act accordingly.

D. Price - SP
LA
David Price has decided against playing this season, he announced Saturday.
Price said he looks forward to representing the Dodgers next year. His absence will open up a spot in the rotation for Ross Stripling, Dustin May or Tony Gonsolin. It's possible that two of the three could open up as starters should the team choose to go with a six-man rotation.
Added 4:44 pm (EST)
Added 4:44 pm (EST)

M. Tanaka - SP
NYY
Masahiro Tanaka took a Giancarlo Stanton liner off the head during a simulated game Saturday and was taken to the hospital.
Newsday's Erik Boland said Tanaka was motionless for several minutes before being helped up. He later walked to the dugout with assistance and was taken to New York-Presbyterian Hospital for further evaluation. The Yankees said he is currently alert, responsive and walking under his own power.
Added 3:31 pm (EST)
Added 3:31 pm (EST)

R. Sanchez - SP
STL
Cardinals president John Mozeliak announced Saturday that Ricardo Sánchez has tested positive for COVID-19.
More tests are pending for the team, according to Mozeliak. Génesis Cabrera also tested positive, so the Cardinals will be missing some potential bullpen arms, at least while they quarantine for the next couple of weeks. Sanchez was claimed off waivers from the Mariners in February after posting a 4.44 ERA, 1.34 WHIP, and 135/38 K/BB ratio over 146 innings (27 starts) at the Double-A level in 2019.
Added 2:51 pm (EST)
Added 2:51 pm (EST)

G. Cabrera - RP
STL
Cardinals president John Mozeliak announced Saturday that Génesis Cabrera tested positive for COVID-19.
Ricardo Sánchez also tested positive and there are still more tests pending. The Cardinals already have a total of three positive tests so far. As for Cabrera, he'll have to self-quarantine for now and will have to have two negative coronavirus tests before being cleared to join his teammates. The 23-year-old could pitch out of the St. Louis bullpen at some point this summer assuming all goes well with his recovery.
Added 2:43 pm (EST)
Added 2:43 pm (EST)

T. Bauer - SP
CIN
Reds pitching coach Derek Johnson said the idea of Trevor Bauer starting every fourth day is "100 percent on the table."
Bauer has said in the past that he wants to try it and it appears the Reds are at least willing to listen with a unique 60-game season awaiting them. The big question is what sort of impact this could have on the other members of their rotation. They have a pretty solid group of five, including Luis Castillo, Sonny Gray, Anthony DeSclafani, and Wade Miley. It's at least worth keeping an eye on, as the potential of additional counting stats could play big this year in fantasy leagues.
Added 2:06 pm (EST)
Added 2:06 pm (EST)

D. Hernandez - RP
BOS
Red Sox manager Ron Roenicke said Saturday that Darwinzon Hernandez has tested positive for COVID-19.
Hernandez is back home and thus hasn't had any interaction with his teammates. While it's unclear if he's displaying symptoms, his status for the start of the season is now in question. The 23-year-old compiled a 4.45 ERA with 57 strikeouts and 26 walks over 30 1/3 frames during his rookie season in 2019.
Added 1:51 pm (EST)
Added 1:51 pm (EST)

M. Sanó - 1B
MIN1
The Twins announced Saturday that Miguel Sano has tested positive for COVID-19.
That makes four positive tests in the Twins' 60-man player pool, the others being Willians Astudillo, Edwar Colina and Nick Gordon. All four players consented to having their names revealed. It's unclear if Sano has any symptoms, but he will remain away from the team for now and will have to have two negative tests come back before being cleared to return.
Added 1:27 pm (EST)
Added 1:27 pm (EST)

J. Taylor - RP
BOS
Josh Taylor has tested positive for COVID-19, Red Sox manager Ron Roenicke announced.
Taylor is staying at a hotel nearby the team in Boston and will have to quarantine for two weeks. His health is the most important factor here, but it's unclear if he'd be ready for the season even if he has a speedy recovery. This is a completely new situation, so guessing is just futile. Taylor, 27, posted a solid 3.04 ERA and 62/16 K/BB ratio over 47 1/3 innings as a rookie last season.
Added 1:18 pm (EST)
Added 1:18 pm (EST)