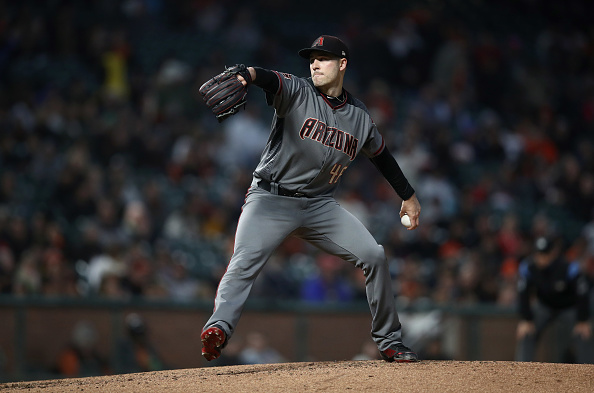 In an unexpected move, Patrick Corbin did not sign with the Yankees opting for the extra year on his contract and will head to Washington. This slots him potentially third in the rotation, but the Nationals may prefer to lead with Max Scherzer , then pivot to Corbin with Stephen Strasburg taking the third starting pitching slot. Regardless, it will impact fantasy owners in upcoming drafts along with ramping up the competitive level of the National League East. Flying below the radar, Houston signed veteran Robinson Chirinos to a one year deal which will be covered as well.

On the surface, it seems like a move to Washington only enhances Corbin’s fantasy status. He just finished a well timed career year in which he won 11 games with 246 strikeouts against 48 walks in 197 innings with a 3.15 ERA, 2.47 FIP and 1.05 WHIP. This also coincides with a career best BABIP allowed of .302 with the introduction of the humidor in Arizona.

Playing a huge part of Corbin’s breakout lied within subtle changes in his pitch usage. Using the data on Brooks Baseball, note the transition away from his fastball and change-up from 2017 to last season along with a spike in slider usage along with the introduction of a curve: 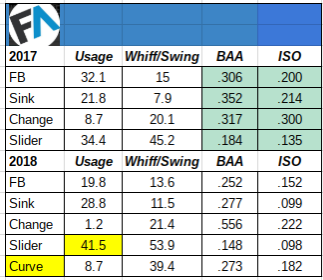 While there will be some migration of Corbin’s numbers to mean going forward, there’s enough evolution above to maintain a high level of pitching. Corbin’s strikeouts minus walks percentage surged to 24.8 percent, his swinging strike percentage increased by 4.6 percent and his contact allowed dropped by almost 10 percent. Depressing his contact will be an important factor to defray pending regression. Why?

For starters, Corbin yielded hard contact (exit velocity of at 95 MPH) 41.7 percent of the time in 2018. Getting ground balls nearly half of the time helps, but when hitters elevate contact, it could mean more home runs in they year ahead. Both Steamer and ZiPS project numbers more in line with Corbin’s career numbers than last year’s potentially career best ones. Steamer foresees a 13 - 10 record with 201 strikeouts versus 58 walks in 195 innings, a 3.58 ERA and 1.22 WHIP. ZiPS forecasts a 12 - 8 record with a 195:50 K:BB in 181 innings with a 3.63 ERA and identical 1.22 WHIP.

Corbin did take strides in refining his pitch arsenal and cashed in accordingly with his six year $140 million dollar contract. In regards to his early average draft position, it’s also pricy. Through 15 NFBC drafts, Corbin’s the 16th starting pitcher drafted on average at pick number 49.6 with a high draft choice of 36 and a maximum pick of 65th overall. Due to the inflated draft price and perceived value of pitching in Washington, it’s likely Corbin will not be a personal target. If Corbin can pitch to his expected kwFIP from xSTATS, then he could be worth this price, just heed the Steamer and ZiPS projections.

When Texas did not offer Robinson Chirinos a contract, it seemed intriguing. Chirinos did not light the fantasy world afire last year, but he finished close to projections. He hit 18 home runs (tied for sixth) among his peers last year at catcher with 48 runs, 65 RBI and a .222/.338/.419 slash line. Not much changed within his profile as Chirinos kept his walk percentage in the double digits but the strikeout rate rose by over seven percent.

In spite of increasing his line drive percentage by 7.7 percent and his BABIP growing by five percentage points, Chirinos average decreased by 33 points. Strange. He also traded ground balls for line drives and fly balls with a better hard hit percentage (44.1 percent) yet his expected slash of .218/.335/.431 aligned with his regular season total. But, there could be hope.

Yes, Texas plays as an above average hitters park, but moving to Minute Maid Park for half of his games could bode well for Chirinos. After a slow start, he hit .244/.368/.422 with a home run every 19 at-bats. Factor in his propensity to pull the ball, 49.5 percent of the time last year with his 44.1 hard hit percentage and his fly ball and line drives from the past two seasons look as such with his new home in Houston as the backdrop: 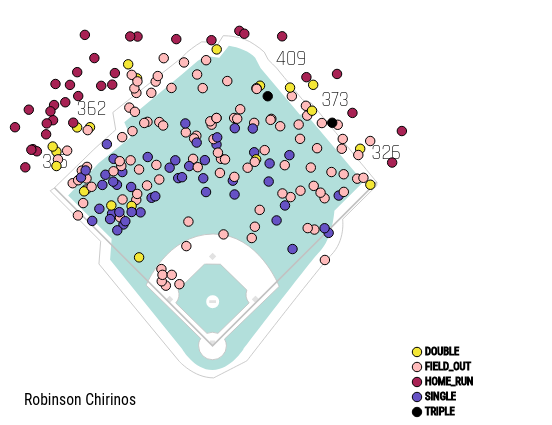 Over the last two years, Chirinos owns a .237/.349/.460 slash with 36 home runs in 741 plate appearances. His home run total exactly matches his expected home run total from xSTATS and hitting in Houston could help his average bounce back from last year’s disappointing total to one closer to the line above. There’s not much hype surrounding boring veterans, but Chirinos as a second catcher in 12-team leagues could be a worthwhile target with upside in a loaded lineup. Especially with his average exit velocity of 93.3 MPH on line drives and fly balls in Minute Maid.

Be sure to stay ahead of your competition on Fantasy Alarm where the offseason does not end.