Greg Jewett is here to explain the trade between the Rays and Mariners and what it means for both teams. 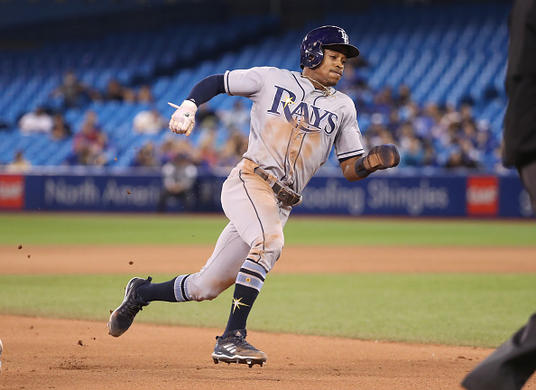 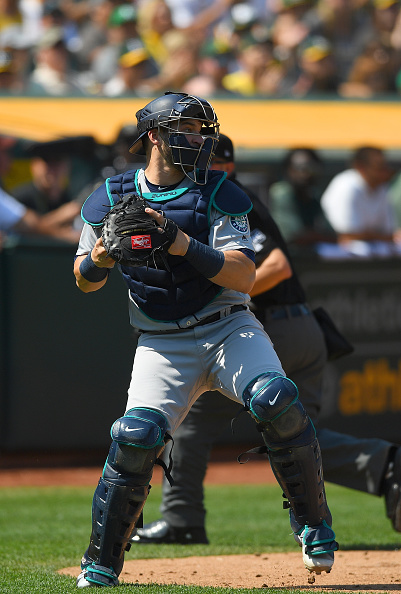 Although Trevor Rosenthal signed with the Nationals, the hot stove finally seemed to light with Seattle and Tampa Bay making yet another trade. Mallex Smith will head back to the Mariners in return for Mike Zunino and Guillermo Heredia . It seems like a deal which could benefit each team. This also opens the door for a player with a skill set fantasy owners crave to find more playing time with the Rays.

Starting with Mallex Smith , he takes his second half breakout to Seattle and will be added to their outfield mix. This will be interesting since this could signal a move by Dee Gordon back to second base or the Mariners trying to reshuffle their infield. Perhaps Robinson Canó to first base? As for Smith, he finished 2018 with 40 stolen bases in 141 games and a .296/.367/.406 slash line.

Smith increased his contact percentage by over five points last year and reduced his swinging strike percentage by 1.7 percent. This bodes well to Smith carrying over some of the gains in batting average to his new team and for fantasy owners banking on an improved average by him. However, one must note Smith’s home and road splits prior to paying full price in drafts next year.

No one invests in Smith for power, so the even distribution of home runs and RBI at home or on the road do not make a ripple in his fantasy value. However, Smith ran more aggressively at home and his former team, Tampa Bay, led the majors in stolen base attempts per game in 2018. Seattle did finish 11th in this same category, but where Smith hits and how many times he attempts to steal will affect his 2019 numbers. Also, one cannot ignore how well Smith hit at home compared to the road. Looking at Steamer projections, they slate Smith for 60 runs, five home runs, 47 RBI, 34 steals and a .261/.329/.364 slash. Much of his counting statistics will depend on where he hits in the lineup, for now, under on home runs, over on average and the steals feel about right.

Tampa Bay feels it sold high on an outfielder they had a glut of and addressed a clear need for a right-handed hitting catcher. This leads us to Mike Zunino . He did launch 20 home runs last year in 113 games. More importantly for the Rays, Zunino led catchers with 12 defensive runs saved using the metrics on Fangraphs, caught 34.6 percent of potential stolen base attempts and recorded a .998 fielding percentage last season. Plus:

2018 catchers by defensive runs above average:

Rays just got one of the league’s best defenders.

Although it’s tough to invest in a catcher who can drain batting average, hope lies in him rebounding from his slash line crater to .201/.259/.410 last year. He’s one year removed from hitting .251/.331/.509 and his underlying metrics align over the last two years. Some luck and maybe a new home will allow Zunino to bounce back. It’s tough to invest in an average over .235, but it would be an improvement. Hone in on his on-base tendencies in spring to see if a rebound lies in the offing. Here’s a look at his line drives and fly balls from the last three years with Tampa Bay as the backdrop: 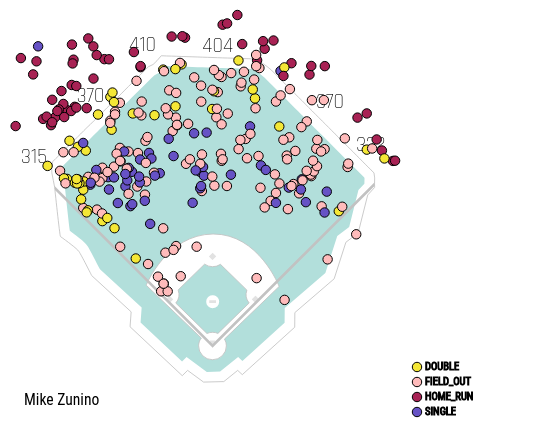 Steamer suggests Zunino will hit 19 home runs with 51 RBI and a .209/.282/.408 slash in early projections. Taking the over on home runs and average for now. But Zunino needs to raise his walk percentage to make this happen.

Some will speculate on Guillermo Heredia ’s strong September, but he should do well in a similar role as he had in Seattle. Face left-handed starters and be a late inning defense substitute. Heredia did hit .414/.514/.655 over his last 13 games of 2018 with seven runs, a home run, five RBI, a stolen base and six walks versus one strikeout. However, basing a future breakout on a sample this small seems like a reach.

Be sure to stay with Fantasy Alarm all offseason as free agency heats up and trades continue.

Y. Puig - RF
ATL
Yasiel Puig is now being represented by agent Rachel Luba of Luba Sports.
Luba also reps Trevor Bauer, the top starting pitcher on the open market this winter. Puig had been with Dan Horwits and Cesar Suare of the Beverly Hills Sports Council but apparently cut ties after failing to latch on with a team during the 2020 campaign. He had an agreement in place with the Braves in July, but it was scrapped after he tested positive for COVID-19. The 29-year-old free agent outfielder registered a .785 OPS with 24 home runs and 19 stolen bases in 149 games (611 plate appearances) between the Reds and Indians in 2019.
Added 8:25 pm (EST)
Added 8:25 pm (EST)

C. Morton - SP
TB1
Mark Bowman of MLB.com writes that the Braves have "continued to show strong interest" in free agent starter Charlie Morton.
Atlanta inked lefty Drew Smyly to a one-year, $11 million deal last week, but the club is apparently not done searching for starting pitching help. Morton, 37, posted a disappointing 4.74 ERA and 1.395 WHIP in 38 regular-season innings (nine starts) this past summer with the Rays, though he did perform well in the playoffs as Tampa Bay marched all the way to the World Series. MLB.com's Mark Feinsand reported earlier this month that the veteran right-hander was drawing "some level of interest" from "at least" 8-10 teams.
Added 7:02 pm (EST)
Added 7:02 pm (EST)

E. Thames - 1B
WSH
According to Jon Morosi of MLB.com, free agent Eric Thames is drawing interest from MLB, NPB, and KBO teams.
Thames struggled to a .203/.300/.317 batting line in 41 games this past season with the Nationals, who then declined his $4 million option for 2021 late last month. But the 34-year-old slugger should do pretty well for himself this winter given all the avenues he's open to for possible offers. Thames spent the 2014-2016 seasons in the Korea Baseball Organization (KBO) before joining the Brewers ahead of the 2017 campaign.
Added 6:42 pm (EST)
Added 6:42 pm (EST)

B. Snell - SP
TB1
MLB.com's Mark Feinsand reports that the Rays "have told other clubs that they’re open to the idea of trading Blake Snell" this offseason.
Feinsand's source notes that the reigning American League champions are "not actively shopping Snell" but will listen to offers in a quest to cut costs following MLB's abbreviated 2020 campaign. Snell, who turns 28 years old in early December, is owed $10.5 million in 2021, $12.5 million in 2022, and $16 million in 2023 as part of a five-year, $50 million contract extension he signed with Tampa Bay in the spring of 2019. The left-hander registered a 3.24 ERA and 63/18 K/BB ratio in 50 regular-season innings (11 starts) this summer before working to a 3.03 ERA with 37 strikeouts over 29 2/3 innings (six starts) in the playoffs.
Added 6:32 pm (EST)
Added 6:32 pm (EST)