The Nats have pulled a fast one and named Treinen their closer. The Phillies are sticking with their lame closer. Wheeler, Gsellman and Severino are all locked into the starting rotation. 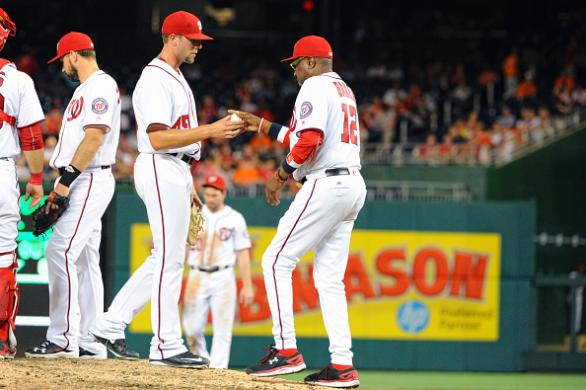 All spring we’ve been talking about what the Nationals would do in the 9th inning. The offseason began with Shawn Kelley in the lead for the position. Games started being played and Koda Glover surged to the fore. So of course, the Nationals have named Blake Treinen as the closer. This entire situation is exactly why we need to move to Solds in the fantasy game (see Is It Time To Replace Saves?). Instead of worrying about who is working the 9th inning, and trying to simply guess what a manager and front office choose to do, we should be focusing on the skills of the pitchers. Alas, we have to deal with the situation that most folks have, so here are thoughts on all three men.

Treinin is the closer. "To be in the position that Dusty [Baker] has put me in, I feel honored. I'm excited to have that opportunity,” said Treinen. "He is a strong young man. Very durable," said Baker. "We feel [catcher Matt] Wieters can help him along because Wieters had [Jim] Johnson and [Zach] Britton [while with the Orioles], who were both sinkerballers." Treinen has a hellacious sinker that has led to a 62.6 percent ground ball rate. It’s an epic number. Toss in a K/9 rate of 8.5 batters per nine the last two seasons and there is a lot to like. Same time, he has a terrible 2.03 K/BB ratio the last two season with a walk rate of 4.20 per nine. It’s extremely difficult to hold the 9th inning gig long-term with a mark anywhere close to that. Just four of the 19 men who saved 23 games last season had a mark that high.

Kelley is still ahead of Glover in my mind. I would hold Kelley if I had room, but moving on from Glover is fine in mixed leagues.

FAAB: Depending on league size, roster depth etc., the bids on Treinin will vary greatly . Note that the Nats took forever to name Treinen, that the club also has two other legitimate options, and that Blake often has issues throwing strikes. I would suggest a bid in the 10-15 percent range of your FAAB dollars. I would expect in many leagues the bidding will be in the 20-25 percent range so if you really want Treinin then 10-15 likely isn’t going to be enough in many scenarios.

Finally, some audio on the decision.

The Phillies named Jeanmar Gomez the closer. This has been their stated positions all spring. It’s a flat out poor decision. I’ve previously stated my thoughts in The Dream Is Dead.

For the rest of the bullpen chatter and closers, be sure to check out the 2017 Fantasy Baseball Closer Grid.

Steven Matz had an MRI on his elbow, and everything looked ok (yeah right). That said, he received a PRP injection and will not throw for three weeks. Matz obviously will miss all of April and early May in a best-case scenario. Don’t know why anyone cares at this point.

That leaves the Mets rotation to begin the season as the following:

Wheeler – not interested folks. I keep saying the same thing. He legitimately has had like seven setbacks with his elbow since Tommy John surgery. He was supposed to be pitching in the bigs last May folks. He looks good the last couple of times out. My question to you is... so what? The road to success is extremely muddled for Wheeler. Can his arm hold up? Can he avoid the walks? How many innings will he throw? To that last point – it sounds like 125 innings is likely the high end for Wheeler. Of course, the club left option the option that he could throw more. I wouldn’t expect him to throw more.

Gsellman was excellent last year as a rookie with a 2.42 ERA, 1.28 WHIP, 8.46 K/9 and a 2.32 GB/FB ratio. If you need a rotation arm, and he’s available on waivers, he’s a very solid target to look toward. He could make 30 starts this season, he could make 13, so be mindful of the entire Mets’ rotation situation before going all-in on Gsellman, he of the fastball/slider dominance.

Last season I wrote this about Luis Severino. “I say/write it all the time. I want strikeouts, grounders and no walks. Though the strikeouts are down a bit this season, Severino still profiles exceptionally well in all three of these measures. This is a profile that you want to own.”

Turns out he will get a chance to improve on those numbers in 2017... from the starting rotation after he was named the 4th starter of the Yankees, even though his manager doesn’t seem overly excited about the decision. “We didn’t think there was one guy who stood way above [the rest],” manager Joe Girardi said. “I thought [Severino] did a better job. In saying that, he needs to grab this and run with it.” Way to give a young guy some confidence Joe. At least he’s getting the chance to run with the starting spot, even if his manager isn’t stoked about the young righty.

The skills are there with Severino, and it’s a nice set of skills. I’m still bullish on his future. Severino posted 16 strikeouts, a 1.24 WHIP and walked just five guys in 13.2 innings this spring (here are his numbers from Thursday which should be added to the numbers just listed: 5 IP, 5 H, 1 ER, 1 BB, 4 K). Cautious optimism is as far as I would go. In a 12-team league he’s an 7/8 starting pitcher.

NOTE: All these moves have been incorporated into the Fantasy Alarm Player Rankings.