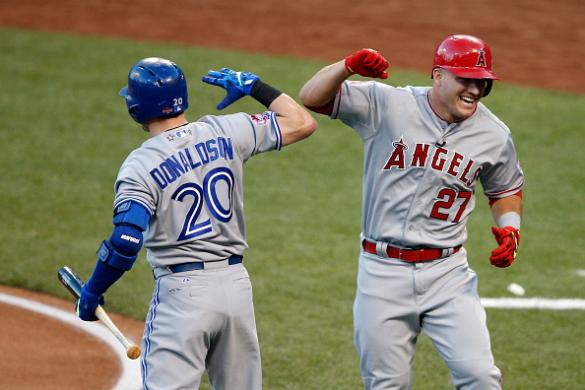 There was also growth in the men hitting homers as 111 men hit at least 20 homers last season, nearly double the total of 64 hit in 2015.

Power was up across the board last season.

There was an interesting article recently at MLB.com. A lot of the data below flows from that piece, but let me boil it down for you.

1- There are lots of young power hitters – guys like Nolan Arenado, Bryce Harper, Gary Sanchez and Corey Seager – that are better, at a younger age, than players of the past.

3 – The average launch angle of the ball off the bat few from 10.5 to 11.6 percent in 2016. Thirty-eight players increased their launch angel by five or more percent. Anthony Rendon and Christian Yelich topped the list of players that enacted an increase leading to significant homer gains.

Here are some very interesting quotes from the piece at MLB.com.

“Last year I lost my fear to strike out. I realized early in my career when I hit a homer, it's because I was aggressive. But I was aggressive just 20 percent of my at-bats.” Jose Altuve

"You're not going to, overnight, become a home run hitter." Mookie Betts

"Because I was a better baseball player last year than I was the year before. But I didn't try to elevate." Charlie Blackmon

"I didn't try to hit balls higher, I tried to hit balls lower. Last year, I wanted to flatten my swing out and kind of decrease the launch angle a little bit, but not much. I wanted to hit the ball on the line more.” Kris Bryant

"Ground balls up the middle, in general, just aren't going through like they used to be. So there's a lot more room hitting the ball in the air." Jedd Gyorko

"Right now, I'm just working on back-spinning the ball out of the ballpark to all fields." Will Myers

“If I fly out four times I had a great night... because I didn’t hit a ground ball. I definitely changed and made a conscious effort to get more balls in the air.” Justin Turner

"There's the old philosophy of hitting down on the ball to create backspin. If you hit down on the ball and hit the top of the ball, you're still hitting a ground ball. If you hit the center of the ball, the margin of error is so tiny to create backspin, you have to be really, really good to do that. That's where this new swing plane comes in. This loftier swing plane makes it a lot easier to hit the bottom of the ball.”

So it seems that hitters are actively trying to make adjustments to help their swing. That’s a genius statement by me by the way. Some players are trying to change their swing plane, others are trying to lift the ball, others are just trying to hit the ball harder. Given all the data we have, it makes sense to me that batters would be trying to gain incremental advantages at the dish. The real question is – can players actually implement the changes they are seeking to enact in order to achieve a more desirable result? Given the talent level in the big leagues right now the answer might just be yes.

Some further reading materials in the Alarm Draft Guide.