Kennys Vargas can mash, bill the positives outweigh the negatives with the potentially fearsome basher? Ray Flowers tells us. 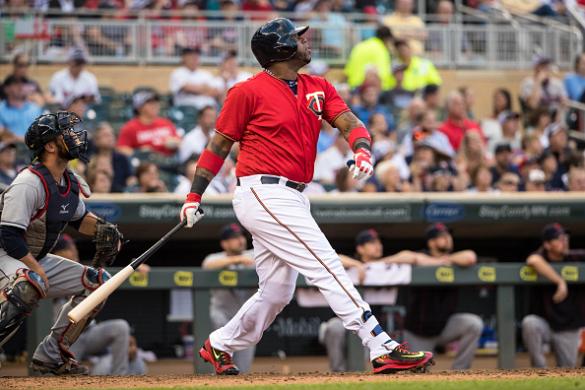 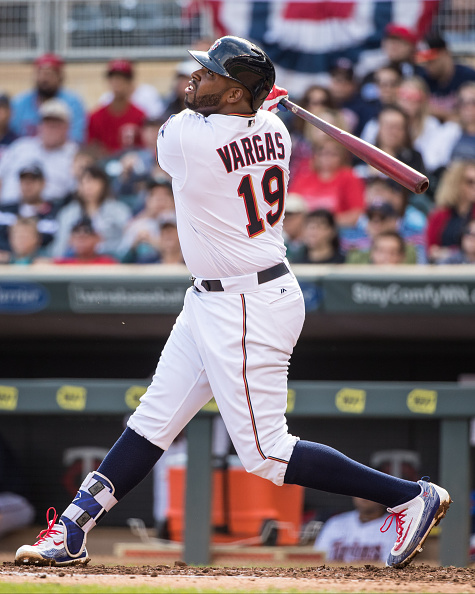 How does a right-handed bat improve? How about by working with Manny Ramirez? “It was just me and him,” Vargas said. “He showed me Santiago de los Caballeros, where he’s from. I met his family. We’d go eat together. He’s a great person. He taught me a lot,” Vargas said. “He always talked to me about the uppercut swing, the elevated ball. He said that was the key for him to hit so many home runs (555) in the majors. He said no matter where the pitch location was, he tried to elevate every pitch.”

Certainly can’t hurt Vargas that he worked with Manny.

Vargas ain’t a small guy, and he’s never going to win a ‘hottest guy on the beach in a speedo’ award. That said, he’s a massive man who looks more like a football player than a baseball player checking in at 6’5” and 275 lbs. It would be ideal if he would take to heart the advice that was shared with him by Manny because that’s how Vargas is going to his game to the next level. Lift the ball young man.

Over parts of three seasons, Vargas has gone deep 24 times in 542 at-bats. That’s not an exciting number by any means but compare it to these fellows 2016 efforts: Adrian Gonzalez (18 homers in 568 at-bats), Mitch Moreland (22, 460), Eric Hosmer (25, 605). Despite that solid homer pace though Vargas has not lifted the ball with a 34.0 percent fly ball mark. That’s a completely league average mark. However, Vargas did something exciting last season – he hit the ball in the air producing a 47.9 percent fly ball ratio. A mark like that is death on batting average, more on that in a moment, but it would be an immense help with his homer count. Note that the massive switch hitter owns an impressive 18.9 percent HR/FB ratio for his career. In just 152 at-bats last season Vargas hit 10 homers. It’s a bit unlikely that he would hit a homer every 15 at-bats in 2017, but it’s impossible not to be excited about the growth he showed last season. Furthermore, on the 10 homers he hit last season he averaged 411.3 feet per blast with a 104.1 mph mark off the bat. The league average last season for both categories was 397.4 feet and 103.9 mph.

More on the power.

Statcast has a new feature called “barrels.” Here is what that means.

“To be Barreled, a batted ball requires an exit velocity of at least 98 mph. At that speed, balls struck with a launch angle between 26-30 degrees always garner Barreled classification. For every mph over 98, the range of launch angles expands.”

Last season when a ball was indeed “barreled” the result was a batting average of .822.

Last year Vargas had a “barreled” rate of 13.8 percent. Amongst batters with at least 80 batted ball events last season that rate was 24th best in baseball. Some further context the mark was better than the rates posted by Kris Bryant (12.9), Josh Donaldson (12.5) and Edwin Encarnacion (12.3).

All that mashing led Vargas to a .270 Isolated Power mark last season. Amongst batters with 150 plate appearances last season that mark was 10th in baseball.

When Vargas hits the ball he does damage.

However, there are obvious holes that need to be discussed.

Vargas has 174 strikeouts in 595 career plate appearances leading to a terrible 29.2 percent strikeout rate. That mark has been “earned” as he has a 13.2 percent swinging strike rate. He swings and misses an awful lot. A positive is that his walk rate jumped last season to 13.6 percent, a number that is larger than the combined 10 percent rate he posted in 2014-15. Last season he struck out, walked or hit a homer 91 of in 177 plate appearances or 51.4 percent of his trips to the dish. He’s a true three outcome bat trying his best to be the next Adam Dunn.

Vargas also owns another trouble talent... he only mashes lefties while limping home against righties. This might be the biggest concern for his outlook in 2017 as the Twins could try and go with another bat against righties (Byung-ho Park hit only .198 against righties last season but he did mash 10 homers in 162 at-bats. More on Park can be found below). Here are Vargas’ career splits speaking to the fact that he’s been impressive against lefties but worse than league average against righties through 595 plate appearances.

Byung-ho Park was left off the 40-man roster this offseason by the Twins, but when no takers were found for his contract he passed through and remained with the Twins. Park has been out of control mashing this spring seemingly putting himself back in the good graces of the club. Park continues to push Vargas for work at DH this season and it’s even possible that Vargas could be sent to the minors to make room for Park. Here are the numbers as of this writing, but recall, the Twins all but gave up on Park this offseason.

As of this writing, here is Vargas’ ADP data.

I’m a believer in the bat of Vargas but he’s not doing himself any favors this spring as Park continues to mash. Look for most of the attention to be paid to Park early on meaning Vargas is likely to be had at virtually no cost on draft day. There are obvious negatives with Vargas though causing him to be nothing more than an extremely deep league option.

10-Team Mixed: Pay him no attention in this format.

12-Team Mixed: Can’t see why you should be looking at Vargas here on draft day.

15-Team Mixed: Maybe. Vargas has a profile that is similar to Miguel Sano, though his cost will be nothing compared to that of his more heralded, more talented teammate. Until the playing time situation is cleared up, and it’s not likely to happen in March, he isn’t someone to spend a draft pick on, though keep an eye on his bat if it suddenly awakens as he has the talent to hit 30 homers with full-time work.

AL-Only League: I’m in here. It only took $5 for me to roster him in AL LABR. Given that the cost was so low it’s pretty clear that even the experts aren’t over the moon with Vargas. It’s all about potential versus what is known with Vargas and that should keep the cost suppressed.