Odubel Herrera had a heck of a season last year. Are there any reasons to believe that he could take another step forward in 2017? 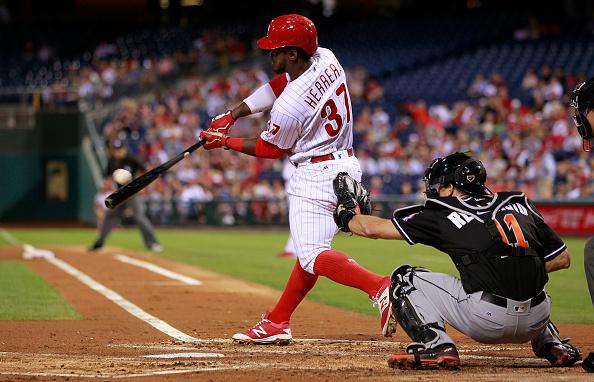 Herrera seems to have a stable skill set. Pretty easy to see that. Just check out his slash line in his two seasons.

Pretty hard to show more consistency than that from year to year.

Herrera has also been extremely stable home and away. Here are the numbers through two seasons.

Herrera does have an evident split between lefties and righties. 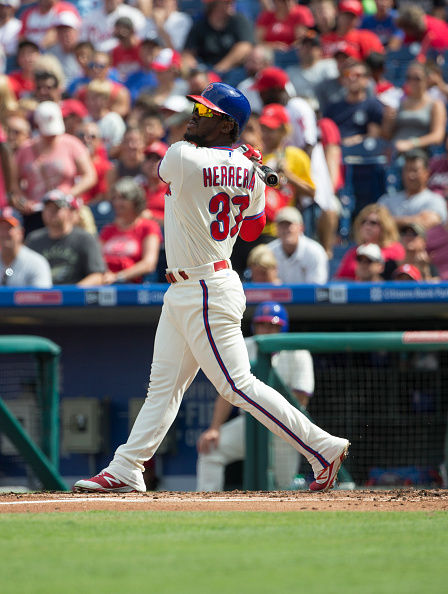 Those splits against lefties won’t send Herrera to the bench any time soon, but it is clear that your expectations should be greatly muted when a lefty is on the bump in terms of the expected power output.

Herrera posted an Isolated Power mark of .121 as a rookie.
The mark was .134 last season.

Again, remarkable levels of consistency with some slight improvements across the board.

How do we explain that slight growth? Can we look at just one month?

Herrera was bonkers good in April with a .313/.462/.425 slash line. Yep, the dude had a .462 OBP in April. All spring Herrera was saying his plan was to work the count more, to get on base at a better clip and then, boom, it just flat out happened. It happened at an obnoxious rate too as he walked 23 times in 24 games. Is it really that easy? Can a guy just say he wants to do something and do it? I said at the time no. Folks argued. Well, let’s let the data speak for itself.

So, for one month Herrera was one guy while for the other 11 months of playing baseball he’s been exactly the same guy. Which guy are you expecting to see in 2017? You know which way I’m leaning if you’ve read a single word I’ve ever written.

Further, if we remove April of 2016, let’s compare the rest of his effort last season to his 2015 numbers.

He was too good early.

He was too crappy late.

Split the different and what do you get... the guy we’ve seen the last two seasons.

Herrera was still effective last season as offered an increase in his slash line, despite losing .037 points from his rookie BABIP. That’s not surprising after his rookie mark was .387. He still posted an excellent .349 mark in 2016.

While producing those hits, Herrera changed his approach a bit. Check out the splits he posted in his two seasons.

He didn’t pull the ball nearly as much which, given his overall game, is likely a good thing. Same time, it’s harder to envision growth in the power category if he maintains his spread the ball all over the field approach. It’s also hard to envision his homer count going up given his mere 26.9 percent hard hit ball rate. The concern about the growth in the homer category is further evident in the following chart which shows that the majority of the fly balls he hits go to the center or the opposite field (from MLB.com). 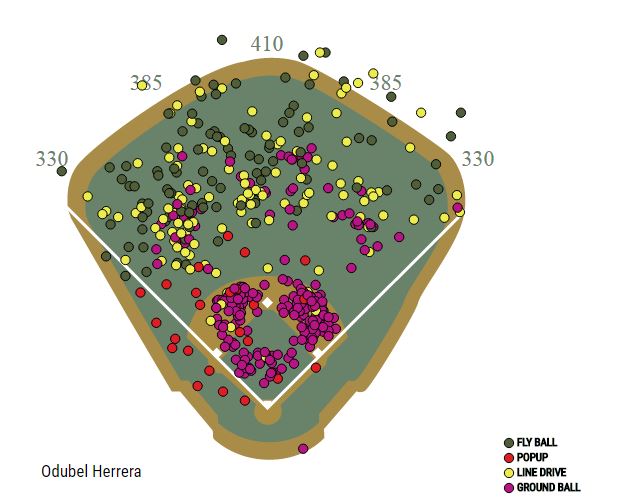 Finally, I will also point out that Herrera cut his strikeout rate from 24.0 to 20.4 percent. That’s certainly positive growth.

Everyday he will play. He hit first 76 times last season, second 38 times and third 23 times last season. It would seem that he’s likely to hit third behind Cesar Hernandez and Howie Kendrick to open up the campaign.

As of this writing, here is Herrera’s ADP data.

Herrera seems like a very stable option. At the same time, future growth seems rather unlikely given his overall game, so don’t purchase his services expecting bigger and brighter in 2017.

10-Team Mixed: Nothing more than a fourth outfielder option without any discernable upside.

12-Team Mixed: Still want him as my fourth outfielder here, but his stability quotient would allow him to be drafted as a third if need be.

NL-Only League: Same caveats, but you can go a round early, or throw a few more dollars, at Herrera given his overall game, spot in the lineup, and stability the aforementioned stability factor.

C. Morton - SP
TB1
Mark Feinsand of MLB.com reports that the Braves and right-hander Charlie Morton have agreed to a one-year, $15 million deal.
It's the largest free agent contract thus far. Morton became a free agent at the end of October after the Rays declined a $15 million club option for 2021, but he ended up getting the same salary on the open market. And a big bonus is that he managed to stay close to home, as was his wish. The 37-year-old posted a disappointing 4.74 ERA and 1.395 WHIP in 38 regular-season innings (nine starts) this past season, but he showed an uptick in velocity along with better results during the Rays' postseason run. He'll join a Braves' rotation which has already added Drew Smyly this offseason. If Mike Soroka can come back healthy, this rotation could be dominant. Morton was originally drafted by the Braves in 2002 and pitched one season for the club before being traded to the Pirates in the Nate McLouth deal.
Added 9:17 am (EST)
Added 9:17 am (EST)