Everyone in the universe seems to love James Paxton. Is that love justified with the always-injured lefty? 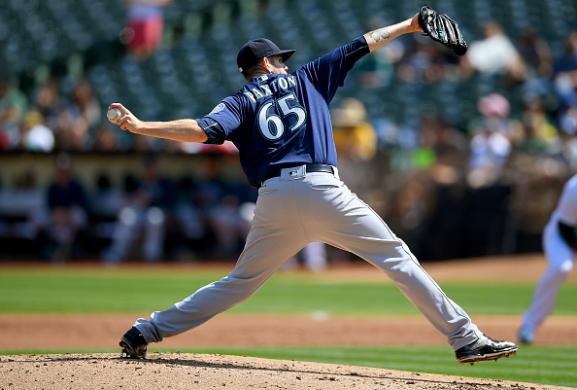 So, let me ask you... how much better has Paxton been than the big-league average? Not as much as you thought, right?

Innings and injuries. Gotta start there.

Paxton is 28 years old and he has two seasons in his life with 110 innings pitched.

In 2012 he missed 38 days with a right knee contusion/soreness.

In 2015 he missed 107 days with a strained tendon in his middle finger. His season also ended early when he tore the fingernail off one of his fingers.

It’s always been something, over an over, with different parts of his body continually breaking down. That’s a huge concern with Paxton that folks willingly overlook cause of his talent. We don’t at Fantasy Alarm which is why we have him ranked lower than his ADP suggests he’s being taken (see below).

Paxton worked on his mechanics this offseason as he continued to augment the changes he made last season. He would practice in front of the mirror so he could watch
himself in his proper form. “I can feel it myself, or Mel can tell me,” Paxton said, “that I’m getting too high or too low. I’ve got a position that I get to. In the offseason, I was doing mirror drills to make sure I was getting to the same spot every time.” Paxton wants to maintain that correct run through his mechanics because the change he enacted last season added mph to his fastball, a massive difference. “He thought my arm slot was too high,” Paxton recalled. “So we tried to bring it down. It was one of those things

that just clicked. It was frustrating that it was something like that, such a small thing, that I feel I should have noticed myself.” The new arm slot also added bite to his slider, and that ain’t hurting nobody.

Paxton is also stronger mentally, including understanding more clearly what he needs to do in order to be successful including throwing all four of his pitches. “We won’t just abandon a pitch when it’s not really working for me,” Paxton said. “We’ll just throw it in spots that are safe and try to find it. We’ll throw it in between innings trying to get it going. It could be a game where it comes around in the fifth inning and then it’s really good. And that’s what will get me through the fifth, sixth, seventh inning.”

Back to the velocity.

Paxton finished the season with a 96.7 mph mark on his heater according to PITCHf/x, two mph harder than he threw his heater his first three years in the big leagues. He also finished on a nice run last season with a 3.19 ERA and 1.05 WHIP over his last 67.2 innings when he was operating at optimal levels (pretty sure that 1.20 BB/9 rate was an outlier). By the way, the only pitcher in baseball to average 96.7 mph on his fastball last season was Noah Syndergaard at 97.9 mph. That’s it. Can Paxton be second again this season?

The change with the heater did add to his strikeout totals as his K/9 rate went up a full batter. Given his stuff, and the increase swinging strike rate – the mark jumped from 8.5 percent to 11.7 last season – it would seem that Paxton has the talent/stuff to be a strikeout an inning arm.

So, a new arm slot led to more heat and strikeouts... and it also led to a massive reduction in his walk rate? Remember, we’re talking about a guy who has a 3.44 BB/9 rate for his career. Is it reasonable to expect him to maintain the pace he set last season when he cut that rate in half at 1.79 per nine? How can you possibly believe that he can sustain that pace? For six years, he was one guy, he changes his arm slot a few inches, and all off a sudden he’s an elite option in the walk column. Really? You’re fully buying that?

Despite the changes, and success of last season, he allowed a 21.9 percent line drive rate, well above his 20.5 career mark. Some of that had to do with an unlucky .347 BABIP that will certainly regress. He is also extremely likely to see an improvement with his left on base percentage of 66.3 percent. Those are at least two positives.

Paxton had a strong 48.1 percent ground ball rate last season. Same time, that was the third year in a row the number dropped and it was a career worst number (career 50.6 percent). Again, the 48.1 percent mark is great, and that 1.60 GB/FB is something I love to see, but it’s still worth nothing that his ground ball rate has receded a bit.

Paxton was much better against lefties last season than normal, but there are still some concerns there.

The only way he extends the success of last season would be for him to continue to improve his work against lefties.

Paxton worked on his cutter as well and greatly increased his use of the pitch. In 2014-15 he threw the pitch less than three percent of the time. Last season that number leapt to 16.8 percent. When he threw the pitch, batters stood no chance. He threw the pitch 325 times last season resulting in a .189/.196/.256 slash line. Simply a dominating pitch it was. Can he sustain that level though in 2017? The jury is out on that one.

MAKE SURE TO CHECK OUT THE ENTIRE PLAYER PROFILE SERIES FROM RAY FLOWERS.

He’s locked into the rotation with the Mariners... until his body breaks that is.

As of this writing, here is Paxton’s ADP data.

Paxton has a great arm, and showed massive potential in the second half last season. At the same time, his track record is littered with health concerns. At some point, it seems that all pitchers are hurt or dealing with something, so you have to plant that flag somewhere. Given the cost, I would personally be very reluctant to do so with Paxton.

10-Team Mixed: Take the risk here if you’re inclined. This setup is so shallow that there are plenty of viable arms available on waivers or through trade if/when Paxton disappoints.

12-Team Mixed: Ideally, he’s a 6th starter for me here, but he’s being drafted as a 4th starter. You will have to decide how much risk you want to live with.

15-Team Mixed: The cost might be prohibitive, your call. Can he really hold on to all the gains he flashed in the second half last season or will he end up settling into the Gio Gonzalez, Michael Pineda mold of solid but not much more?

AL-Only League: Big strikeouts, big risk, potentially significant return. That about sums it up with Paxton.