Back in the day I used to work for a company called Fanball. All the fellas from that league are still in a keeper league with yours truly, and here are the results for the 2017 draft. 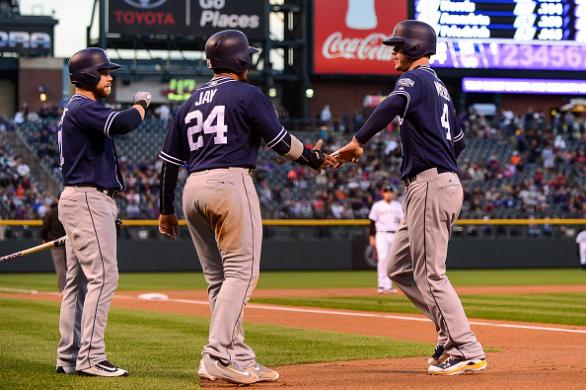 We had a great crew over at Fanball years ago producing a great product and award winning magazines. In fact, Fanball was the company that got me the gig on SiriusXM Fantasy Sports Radio. Of course, Fanball went the way of the Dodo bird, but that doesn’t mean that we’re still not hanging around together when we can. One way we accomplish that is to do a keeper draft every baseball season. Below are the results of that draft.

Here is the setup.

SIZE: We used to have 12 teams in our 5x5 mixed league. This year we moved to 13-teams as Kyle Elfrink’s bother, Cory, was added to the mix. Don’t worry, Cory used to work at Fanball so we didn’t  break the rules to add him to the party.

RULES: The only difference between this league and every other 5x5 is that it’s a keeper league. All 13 teams get to keep five players (Cory had an expansion draft to get his five men). The rules for those keepers follow.

Players can be kept a maximum of three years.
Each year the cost of the player goes up one round.
Free agent pickups cost a 15th round pick in year one.
No player taken in the first round of the draft can be kept.

Here are the participants.

With that, here’s the team I put together.

The rounds are listed so you can follow how the draft went, but understand that with five players kept, on 13 teams, that the end product is likely a more reliable way to look at a team versus focusing on the round cost.

At catcher, I have two guys I’m not a huge fan of. Still, given the cheap as all get out cost, I’m totally happy with the unit. Remember, context matters.

Baez qualifies at second, third and shortstop. Whether or not he has a “full-time” gig, that’s still a 20/20 talent at a great cost in a keeper league.

Travis has knee woes, but he was the last high end second sacker I had confidence in that was available. If he can’t go I can turn to Cesar H. who hit .294 with a .371 OBP and 17 steals last season. Lots of talk about Cesar being taught how to use his serious speed better since he was caught 13 times last season.

Myers isn’t likely to give a full repeat of last season, but he’s still an excellent corner infield option. Excellent. Check out his Player Profile.

My outfield lacks a thumper, simple to see that (I’m hoping that my catcher combo helps to make up for some of that). Same time, there’s oooooodles of young, all-around talent here. Add up Yelich and Polanco last season and you get a player with a .279 average, 22 homers, 92 RBI, 79 runs and 13 steals. Eaton falls short in the homers and RBIs, but look how similar-ish his effort was last season: .284-14-59-91-14. Pence, and I keep saying this, has produced like a champ his last 158 games: .284-22-97-88-5. Can the 34 year old play 150 games though? That’s the question. Heyward is a nice bounce back candidate. I wrote about Heyward’s talents in the FSTA Baseball Experts Draft. As for Ellsbury, couldn’t let him slip at that cost. Check out his Player Profile.

I really like this offense, minus that one power bat.

If we rearrange the order taken and I end up with Cueto, Teheran (Player Profile) and Nola (Player Profile), I’m a happy camper. The Gray situation hurts (he was obviously hurt after the draft). At least I rostered boring but stable Ian Kennedy to give me some cover there, and I also grabbed McHugh (Player Profile) in the final round. There are always arms that emerge on waivers. I’ll need that to happen or for Bauer to improve.

Kintzler is in charge of the 9th inning in Minnesota. I think he can hold off Glen Perkins, if he ever gets healthy.

I’ve got power arms everywhere, and that’s a good start.