Vince, don’t call me Vincent, Velasquez has an arm touched by the gods. He also has a consistently annoying habit of ending up on the disabled list. 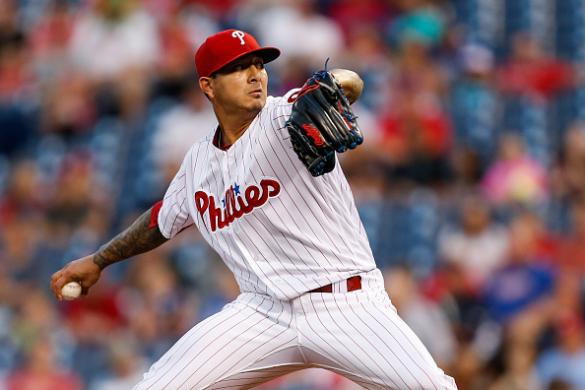 *Velasquez turned pro and then had his 2011 season wiped out by Tommy John surgery.

Usually I wait until the “Skills” section to hit on this, but it’s so obvious, let me just state it here. The guy can’t stay healthy. Cannot. Here is the innings pitched data by season for Velasquez (minors + majors).

That’s two season as a professional with 90 innings.

Here’s a quote from his 2016 Player Profile, written right after his epic 16-strikeout effort against the Padres last April (bolded italics are from the report).

Velasquez is a big-time strikeout arm with a plus fastball and plus change up that falls off the proverbial table when he’s dealing. A strikeout an inning is totally doable. No question. Needs to sharpen up his curveball though as sometimes it “rolls” versus snapping sharply.

Velasquez struck out 152 batters in 131 innings last season, a 10.44 per nine mark, well above the K-per inning rate I referenced last year. Note that if you remove his 16-strikeout effort the mark dips to 136 strikeouts in 122 innings, a rate of 10.02 per nine. Moreover, there is this fact – dude never goes deep into games. Though his per inning K-rate is great, note that he stuck out as many as nine batters just four times in 24 starts. Crazy to think, but do you know how many times in 24 outings he struck out seven batters? Just nine times.

How was his secondary stuff?

Velasquez threw his heater 64.2 percent of the time according to PITCHf/x data. Here is how his secondary offerings were used and received last season.

*Rate – amount the pitch was used as a percentage of 100.
*PA – Plate appearances

Exactly as I mentioned last April, the guy’s secondary stuff stinks. The slider is a passable pitch, but when he tries to take a bit off and use the curveball or the changeup he treats every batter as if they were Mike Trout.

Even though the fly ball rate dipped last season down to 41.2 percent, check out what happened to his homer rate – it exploded, exactly as predicted last April. VV ended the year with a HR/FB ratio of 14.9 percent, double the 7.1 percent mark he posted in 2015, leading to an increase from 0.81 homers per nine to 1.44 in 2016. Why? Because his fastball was smoked for homers at a 15.7 percent clip in the HR/FB category. In “hitters counts” the batter didn’t have to worry about Vince doing anything other than pumping a fastball in there, and when he did, they frequently hit the ball deep when they were able to lift the pitch. 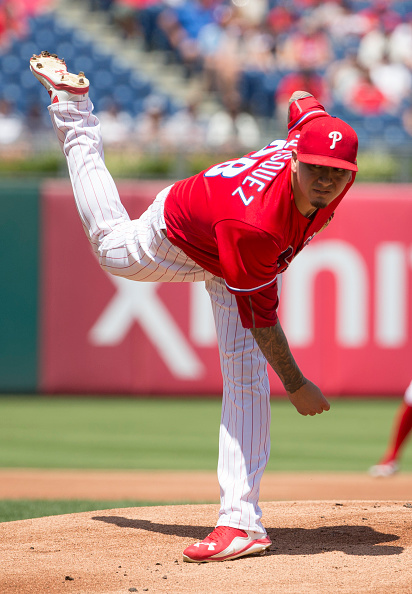 Let’s talk about his late season fade. Velasquez had a DL stint last season with a biceps issue causing him to miss half of June. You recall that he made 24 starts, right? Over his last 12 outings, half his season, after his biceps issue, he simply wasn’t the same pitcher: 4.54 ERA, 1.38 WHIP, 1.69 homers per nine with 9.48 hits per nine (note the velocity was actually one tenth of a mph up from his first 12 starts). Things were even worse his last five starts as he was annihilated: 6.99 ERA, 1.45 WHIP, 3.18 homers per nine with 11.11 hits per nine. After reading those numbers, and adding in his complete and total inability to stay healthy for a full season, how can you possibly be as bullish on him as so many of you appear to be (see the ADP below)? I simply don’t understand it.

Here is a quick review of Velasquez big league work over a full season of innings (186.2).

He has a 4.19 ERA which is a league average number.

He has a 1.31 WHIP which is a league average number.

He has a 23.4 percent line drive rate which is below league average.

That should make you concerned heading into 2017, even though it doesn’t seem like it is.

He will obviously be in the Phillies rotation for however long his arm holds up. It’s not likely to be long enough to qualify for the ERA title.

As of this writing, here are Velasquez ADP data.

The guy cannot stay healthy. Other than the strikeouts, the overwhelming majority of his big league experience has proven Vince to be nothing other than a league average pitcher. I really don’t understand why those two facts aren’t making more of an impact on folks.

10-Team Mixed: Have at it if you will, but I’m not recommending you roster him as anything other than your last starting pitcher.

12-Team Mixed: With only appreciable upside in the strikeout column, he should be taken as a reserve round arm, not as the 5th starter that ADP suggests his current value is.

15-Team Mixed: Arm injuries, a lack of innings, too many fly balls, too many homers and poor secondary stuff make it difficult to envision a breakout in ’17. He’s a luxury, not a baseline talent to build your staff around.

NL-Only League: It’s all about cost. There aren’t a lot of K-per inning arms out there, but the risks have to be factored in before you blindly blow your budget.